The motion-sensing device for the PlayStation 3 hits stores shelves three days early and a month and a half before Microsoft releases the competing Kinect. 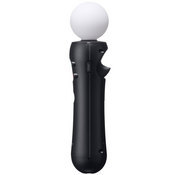 The motion-sensing device, which was scheduled to be released Sept. 19, was available at major retailers, such as Best Buy and Amazon.com, on Friday. Sony is released the new add-on to the PlayStation 3 console about a month and a half before Microsoft is scheduled to release the competing Kinect motion sensor for the Xbox 360.

The PS3 Move system lets a player control a game by moving a handheld wand, much like the Wii. The Sony device, however, is more accurate and works with more advanced games. The Move system includes a special camera that plugs into the PS3 and the handheld controller. The package, along with one game, costs $100. Additional wands cost $50 each.

Microsoft has attempted to advance the concept of motion-controlled games by eliminating the need for the wand with Kinect, which will cost $150 as a standalone product. Instead, the Kinect, which is scheduled for release in the U.S. Nov. 4, features a camera, audio sensors and motion-sensing technology that tracks 48 points of movement on the human body. Players can control on-screen action simply through physical gestures and verbal commands. The sensor bar is designed to plug directly into the Xbox 360 console.

Both devices are expected to be among the hottest selling consumer electronics during the holiday shopping season. In August, the Xbox 360 was the top-selling console for the third consecutive month, according to The NPD Group. The PS3 saw its 13th consecutive month of year-over-year growth, but the Wii had its lowest August sales in three years.

We welcome your comments on this topic on our social media channels, or [contact us directly] with questions about the site.
Comment  |
Email This  |
Print  |
RSS
More Insights
Webcasts
Data Protection Strategies and Secrets - 12/10 @ 11am EST
Succeeding With Secure Access Service Edge (SASE)
More Webcasts
White Papers
Why Chatbots Are So Popular Right Now
5 Key Steps for Assessing Your Security Effectiveness
More White Papers
Reports
The Malware Threat Landscape
The Future of Multi-Cloud Networking 2020
More Reports