50%
Tweet
In the U.S., subsidized phones from AT&T, Verizon, T-Mobile and Sprint give us the illusion that expensive phones are cheap. But in most of the rest of the world, mobile access is bought on a no-contract, pre-paid basis. If you don't need a top-of-the-line phone upgrade every year or two, you can save a lot of money this way. It has advantages for BYOD as well.

Want a $1000 every two years? Pre-paid smartphone plans can save you at least that much. The New York Times Bits blog posted the math: a $650 iPhone 5 coupled with Virgin Mobile $30 pre-paid cellular and data plan (the plan has since gone up to $35 a month) costs about $1370. Total cost of a two year contract with AT&T? According to the Times, about $2360.

There is a big problem with this scenario: The Times' example of a Virgin Mobile plan and an unlocked iPhone 5, is an unlikely one. An unlocked iPhone 5 from the Apple store will only work with GSM carriers. Since Virgin is a CDMA network you pretty much have to buy the phone from them. At the time of writing the iPhone 5 isn't available for purchase from Virgin. The iPhone 4 and 4S are available on the company's website.

Regardless, the Times makes a good point: it's now possible to save an a significant sum if you're willing to pay more up front. Will consumers buy in to this and compensate by going for inexpensive Android phones? I suspect not. Google's flagship smartphone, the Nexus 4's price point of $299 is a major reason I'm convinced pre-paid plans aren't going to be a big part of the high-end phone market. With a $30 a month T-Mobile plan the bi-annual savings would be about $1341, meaning the phone would pay for itself in about six months. Whether it's the best phone for $299 is debatable of course, but it sure sounds to me like a better phone than the iPhone 4, which retails for $50 more from Virgin Mobile and $150 more from Apple. 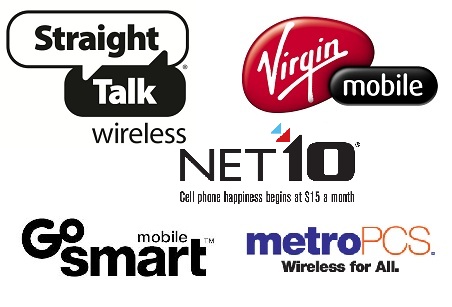 There are several companies that sell pre-paid/no contract mobile plans. They typically buy access to the networks of larger carriers like Sprint and Verizon. Some are owned by those carriers, like T-Mobile's GoSmart.

There are compelling reasons to buy Apple's products and I doubt too that pre-paid smartphones will usher Apple's demise. I do wonder, though, how much consumers purchasing pre-paid plans will enjoy paying a lot more for the older iPhone models which, at least on paper, are inferior to the competition. These older models sold surprisingly well in Apple's last quarter, certainly because of cost. The illusion that the iPhone 4 is "free" comes from the subsidized phone business model. In a pre-paid model, the iPhone 4 doesn't look like a bargain anymore.

The Nexus 4 paying for itself sounds enticing, even in spite of the fact that in December I figured out how to hack a free phone plan. The Nexus 4 is only available for use with GSM carriers, which is fine as I believe that to make buying an unlocked phone really worth it, GSM strikes me as the only viable choice. For starters there's more choice in terms of hardware at all price points. There are disadvantages, particularly that GSM technology has trouble handling events with large numbers of people on the same carrier.

But there's one huge advantage: the ability to painlessly change carriers. All that's needed is to swap the SIM card for one from the new carrier. GSM is also a global standard, so when traveling it's easy to set up with a local carrier.

The fact that it's almost painless and completely viable to swap carriers on a whim is a sea change, for sure. It will open the door for smaller cellular companies to attract customers with lower rates and better service. It may also force the big players to adjust their prices — for example, Sprint charges $70 a month for pre-paid service, and AT&T's pricing starts at $50 a month. If coverage at T-Mobile or Virgin is just as good, why wouldn't a consumer switch?

I think it's crazy at this point to claim CDMA carriers are finished. They've got enormous networks with millions of customers. But as consumers slowly realize that there's absolutely no need to sign smartphone contracts many will likely look for the least-restrictive service that would allow them easily to shift their business. It could end up like buying gas for your car — not many people are brand-loyal to Chevron or Shell; we choose gas stations based on price and convenience.

Pre-paid plans are advantageous for companies that support BYOD for their employees. The company can more easily consider paying for data plans for employees, and might be able to negotiate volume purchases from carriers. At the same time, IT could keep inexpensive phones around to activate on an as-needed basis.

What's clear from all of this is that there may be changes coming, but a lot of that has to do with how quickly and at what rate consumers and enterprises adopt pre-paid packages. Regardless, the changes won't be fast, but the current situation, with its massive price inefficiencies, can't continue unaffected.

We welcome your comments on this topic on our social media channels, or [contact us directly] with questions about the site.
Comment  |
Email This  |
Print  |
RSS
More Insights
Webcasts
Enterprise Database Strategies for 2020
Now That Ransomware Has Gone Nuclear, How Can You Avoid Becoming the Next Victim?
More Webcasts
White Papers
DevOps for the Database
Wired vs. Wireless LAN Solution
More White Papers
Reports
Online Threats -- and What Your Org Can Do About Them
[Special Report] Remote Network Management
More Reports

If you can pre-pay a debit card, what do you need it for? The only good I see about it is that there is no need to bring cash with you. But with the fees linked with debit card use, I surely need to be given a good reason why a pre-paid debit card will be practical.
Reply  |  Post Message  |  Messages List  |  Start a Board
Editors' Choice
Hot Topics