Google's autonomous cars can now lawfully be tested on Nevada roadways, using the first such license issued in the U.S.

Google has been granted a license to test its experimental self-driving cars on Nevada roads, the Nevada Department of Motor Vehicles said on Tuesday. 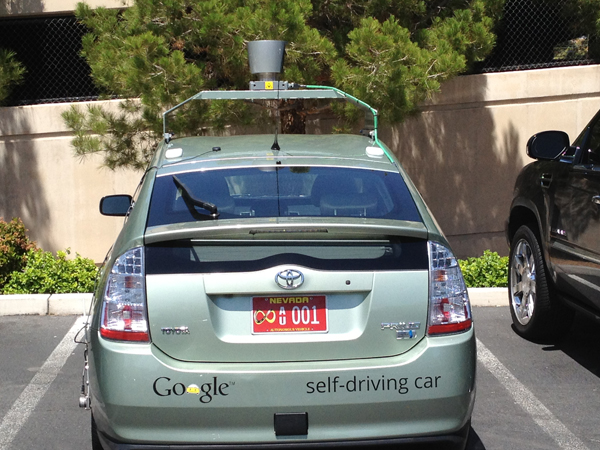 The agency said the license is the first issued in the U.S. under new state laws and regulations that permit autonomous vehicle development.

Having satisfied the Nevada DMV's Autonomous Review Committee with demonstrations on state freeways, highways, and roads in Carson City and Las Vegas, Google has been licensed to operate its driverless cars and has been supplied with special red license plates bearing an infinity symbol.

Nevada DMV director Bruce Breslow in a statement characterized the infinity symbol as "the best way to represent the 'car of the future'" and noted that the distinctive plate will help the public and law enforcement personnel identify Google's cars. When autonomous cars are available to the public, said Breslow, the vehicles will be designated with an infinity symbol on green license plate.

[ Google may have passed its road test, but it seems to have lost a legal test. Read Google Copied Java, Jury Says; Fair Use Question Open. ]

Auto makers have expressed interest in testing autonomous vehicles in the future, according to the Nevada DMV, though the agency did not specify which ones intend to follow in Google's footsteps.

"We're excited to receive the first testing license for self-driving vehicles in Nevada," a Google spokesperson said in an emailed statement. "We believe the state's framework--the first of its kind--will help speed up the delivery of technology that will make driving safer and more enjoyable."

The only publicly reported accident involving a Google driverless car to date occurred last year when a human driver was behind the wheel. In March, Google product manager Anthony Levandowski said Google autonomous vehicles had traveled over 200,000 miles safely on California roads.

Nevada isn't likely to be the only state where autonomous vehicles roam. Google in March obtained permission from the Federal Communications Commission to operate automatic cruise control (ACC) radar units in the 76.0-77.0 GHz band for driverless car navigation. The FCC permit, which covers the San Francisco Bay Area, extending south to Santa Cruz, Calif., and north and east to South Lake Tahoe, Calif., expires at the end of September, 2012.

Google says that while it looks forward to working with Senator Padilla to advance his bill, California does not yet have regulations comparable to Nevada's.

Arizona, Hawaii, Florida and Oklahoma are also in the process of considering autonomous vehicle legislation.

InformationWeek is conducting a survey to get a baseline look at where enterprises stand on their IPv6 deployments, with a focus on problem areas, including security, training, budget, and readiness. Upon completion of our survey, you will be eligible to enter a drawing to receive an 16-GB Apple iPad. Take our InformationWeek IPv6 Survey now. Survey ends May 11.

We welcome your comments on this topic on our social media channels, or [contact us directly] with questions about the site.
Comment  |
Email This  |
Print  |
RSS
More Insights
Webcasts
Protecting Your Enterprise's Intellectual Property
How Elite Analyst Teams are Transforming Security with Cyber Reconnaissance
More Webcasts
White Papers
The 2020 Duo Security Trusted Access Report
Presenting Your Cloud Security Strategy to the Board
More White Papers
Reports
Are Unprotected Cloud Databases Leaking Your Data?
DNS Network Traffic Volumes During the 2020 Pandemic
More Reports