The hybrid smartphone and netbook would cost significantly less than netbooks, chipmaker says. 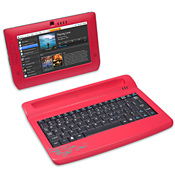 Freescale Semiconductor on Monday introduced a reference design for an Internet-enabled tablet computer that would be a third of the size of an average netbook and would have up to four times the viewing area of a typical smartphone.

The device will be demonstrated Jan. 7-10 at the International Consumer Electronics Show in Las Vegas, Nev. The so-called "smartbook" resembles an electronic-book reader, such as Amazon's Kindle, and includes a seven-inch touchscreen and an optional keyboard accessory.

Freescale says the device can be sold for about $200 with only a Wi-Fi connection. Adding support for wireless carriers' 3G networks would add from $50 to $75. The chipmaker's design would run on Freescale's ARM processor.

A smartbook is a Web-enabled device that's a hybrid smartphone and netbook. The gadgets have been available for several years, but have had little success in attracting buyers. "As general-purpose devices, smartbooks are in a huge wasteland… Explain to me what's been done with the software [for smartbooks] to make it a compelling experience that I can't get with a netbook or smartphone," Avi Greengart, analyst for Current Analysis, told InformationWeek in June.

Freescale's reference design appears to position smartbooks as a competitor to netbooks, mini-laptops that were the hottest-selling PC category last year. If smartbooks are available for a starting price of around $200, then they would be significantly less than netbooks, which range from $300 to $500.

"If you're definition of a netbook is a device designed to surf the Internet, then yes, that is the target market for this device," Glen Burchers, consumer segment marketing director for Freescale, told InformationWeek.

Freescale believes its smartbook design will be more appealing than netbooks to young people from ages 12 to 25 who want a device that can connect to the Internet quickly to surf and to access social networks, such as Facebook, Twitter and YouTube. The device would also be suitable for light gaming.

Freescale says its design would take three seconds to get on the Web with a Wi-Fi connection and have 12 hours of battery life. Software that could run on the chipmaker's platform would include a Web browser, Adobe Flash player, PDF and image viewers, an e-mail client, RSS reader, office suite, handwriting utilities and various widgets for Twitter, Facebook, Flickr, weather and other services.