Retailer meets customers where they're shopping: in stores, online, and on the go.

Lowe's CEO Robert Niblock has characterized 2011 as "the largest singleyear investment in IT instore systems infrastructure in Lowe's history." That was the price of Lowe's going mobile.

In May 2011, the company said it planned to hire 300 employees to augment its 1,000-plus IT staff. It revamped its wireless network infrastructure at more than 1,700 stores to accelerate Wi-Fi speeds by as much as eight times for customers and employees, and it armed employees with 42,000 iPhones, augmented by custom apps and add-on hardware.

It's a recognition, as Niblock put it on an analyst call, that customers are "shopping across channels"--in stores and on the Web--with mobile blurring the lines.

Lowe's is embracing smartphone empowered shopping more than most retailers. With iPhones in hand, its employees can check inventory at nearby stores, share how-to videos, check competitor prices, and point shoppers to Lowes.com, says Jeffrey Chang, VP of IT innovation and strategy. They can access online tools for tasks such as calculating the amount of paint needed to cover a given room--without leaving the customer.

Critical to the Lowe's iPhone effort was the addition of a custom case that includes an additional battery and a credit card reader, so associates can complete sales transactions.

Lowe's developed two internal iOS apps, one for staffers and one for managers, as well as iOS and Android apps for customers. 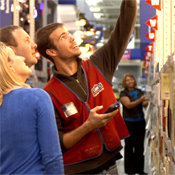 The employee app gives staffers information about prices, inventory, and availability at nearby Lowe's stores. Employees can order products and ring up sales. And they can communicate with co-workers. The store manager app provides access to price changes, sales reports, order statuses, employee scheduling data, and interstore product transfers.

The customer app has the usual e-commerce features plus some mobile tricks, such as a button to call from the find-a-store feature, and the ability to scan UPC, QR, and Microsoft Tag codes. It also includes a set of tools called MyLowe's for organizing information about home projects and past purchases online, along with a selection of how-to videos. And now that tens of thousands of employees have iPhones in hand, Chang says Lowe's plans to keep adding features to the apps.

Lowe's spent about a year and a half "researching, prototyping, and testing concepts for our first iPhone app," Chang says. After that, development took six months.

We welcome your comments on this topic on our social media channels, or [contact us directly] with questions about the site.
Comment  |
Email This  |
Print  |
RSS
More Insights
Webcasts
Protecting Your Enterprise's Intellectual Property
How Elite Analyst Teams are Transforming Security with Cyber Reconnaissance
More Webcasts
White Papers
How to Prioritize Risk Across the Cyberattack Surface
The 2020 Duo Security Trusted Access Report
More White Papers
Reports
2020 State of Cybersecurity Operations and Incident Response
2020 State of DevOps Report
More Reports

The downside on concentrrating so much on their mobile apps is that the conventional internet page seems to be neglected and is quite poor, technical and content wise. It probbaly shows that the slogan doing more with less lacks credibility.
Reply  |  Post Message  |  Messages List  |  Start a Board
Editors' Choice
Hot Topics