Mike Gregoire says company has an edge in big data analytics because it already looks at massive amounts of network, system, security and application management data. 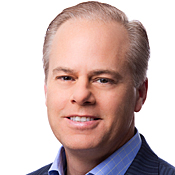 Mike Gregoire
CEO of CA Technologies
New CA Technologies CEO Mike Gregoire covered a lot of ground in his inaugural CA World keynote address to customers on Sunday evening: the consumerization of IT, the Internet of things, big data, cloud computing, the 80/20 IT spending trap, the changing role of the CIO. But in breaking down four "disruptive trends" -- DevOps, mobility, software-as-a-service and management analytics -- he got to the core of CA's diverse product line while providing a glimpse of the software vendor's future direction.

Gregoire, on the job for four months following the retirement of Bill McCracken in December, prefaced things by tallying up CA's innovation capacity: more than 5,000 engineers worldwide, more than $600 million a year in R&D spending and a "significant portfolio of intellectual property," mostly in products that help customers deliver, manage and secure their systems, networks and applications. Moving forward, CA will put more emphasis on "organic innovation" -- fewer acquisitions (only one or two a year, Gregoire later told me, compared with the 10 or 15 it did in its heyday) and more internal development. Considering that today's CA is an amalgamation of more than 150 companies acquired over decades, some retrenchment is in order.

CA's announcement on Monday of two acquisitions, application delivery vendor Nolio and API management and security vendor Layer 7 Technologies, doesn't quite fit that "organic first" narrative. Both acquisitions do fit into CA's focus on DevOps to help customers with their pressing need to deliver business-differentiating applications faster than ever before. "The old waterfall approach to developing applications in 12 to 18 months won't work anymore," Gregoire said during his CA World keynote. "To be competitive, you have to deliver applications within months at the most, but more often in weeks, even days for some things like mobile applications."

The future, he said, is one where development and operations are tightly integrated and highly virtualized, automated and managed -- DevOps. Not surprisingly, CA plays in this area via products that let developers set up virtual lab environments to create, collaborate on and test applications. Nolio's "continuous application delivery" capabilities will fit there. Gregoire cited customer DirectTV, which used CA LISA Service Virtualization to accelerate app dev and testing "from a month or two to as little as a day." Of course, this isn't a new concept: Using virtual environments to speed up dev projects was one of the earliest and most widely used applications of virtualization technology.

By Gregoire's own admission (we spoke on the phone Monday afternoon), mobile is the area where CA is "least mature."

"You can find discrete products to manage devices today," he said in his keynote, "but point products will only create islands of solutions. They won’t help you manage the content and applications being deployed." Neither will CA, for that matter, at least not today. At CA World, it introduced CA Mobile Device Management, software that helps customers manage their mobile devices as well as provision VPN connections, email access, mobile apps and security. CA promised to expand that suite over the next 12 to 18 months to manage mobile apps, content and services as well. Gregoire called CA's mobile effort "one of our biggest organic development programs for 2013 and beyond." CA's formidable rival in cloud and management tools, VMware, launched its Horizon suite of mobile tools in February. Though those tools weren't as complete as some in the VMware community had hoped for, you can expect this to be a continuing area of focus for VMware.

Having run HR software-as-a-service vendor Taleo for several years until it was acquired by Oracle for $1.9 billion in early 2012, Gregoire emphasized that he's a "big believer" in SaaS. He cited IDC forecasts that 25% of all new business software purchases by 2016 will be service-enabled.

CA was one of the first big software vendors years ago to jump on subscription-based pricing, and CA already offers Clarity Playbook, CloudMinder, eComMinder, Nimsoft Service Desk, APM As-A-Service and other software as a service. CA's "ultimate goal," Gregoire said, is to provide a full suite of services-based management and security features, through both organic development and acquisitions, with "a consistent user interface, integrated back end data repository, mobile access and the ability to deploy third-party management and security applications." He emphasized that customers will have a choice of software delivery model; there won't be any forced marches to SaaS.

CA also faces keen competition from a wave of cloud management tool startups, such as Soasta. It is a big question whether enterprise IT will stick with traditional IT management tools form the likes of CA, HP and IBM in the virtualization and cloud era, or transition more to tools from VMware and startups. VMware still is outrunning Microsoft in this management tools realm.

Tell us about what strategy your IT shop takes in this regard. Are you blending in some startup tools with your old favorites?
Reply  |  Post Message  |  Messages List  |  Start a Board
InformationWeek Is Getting an Upgrade!