50%
Tweet
An Internet governance committee is seeking comment on a proposal for managing aspects of the Domain Name System with reduced US government oversight.

An Internet management group, the IANA Stewardship Transition Coordination Group (ICG), last week released a 199-page proposal outlining how the Internet can be governed with less US government involvement, and has solicited public comment about the suggested changes.

The ICG was formed in response to an announcement last year by the US Commerce Department's National Telecommunications and Information Administration (NTIA). Its proposal brings together the recommendations of three disctinct "operational communities" concerned with domain names, technical protocols, and regional address registries.

Last year, NTIA said that it wanted the Internet Corporation for Assigned Names and Numbers (ICANN), the organization that coordinates the administration of the Internet, to shift the NTIA oversight of IANA's responsibilities to "the global multistakeholder community."

NTIA is doing so in keeping with the Commerce Department's 1998 statement of policy that US government is committed to handing responsibility for the DNS to the private sector. The international community has long chafed at the US government's control of Internet administration.

A decade ago, the U.N.'s Working Group on Internet Governance declared that "no single government should have a pre-eminent role in relation to international Internet governance." US lawmakers opposed the prospect of turning the Internet over to the bureaucratic U.N. At the same time, there was talk that one or more major countries might establish an alternative root zone file – essentially a parallel Internet – if the US refused to step back from Internet governance. 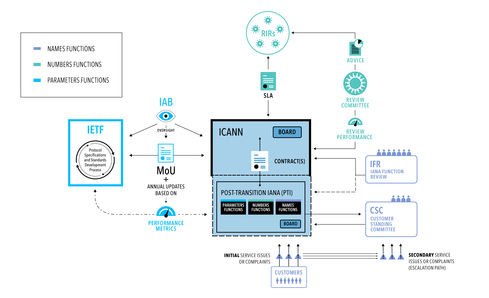 The ICG proposal calls for the creation of a new legal entity, the Post-Transition IANA (PTI), which would handle IANA functions as an ICANN subsidiary. It also calls for the creation of a Customer Standing Committee (CSC) that would monitor the PTI's execution of its responsibilities and an IANA Function Review process (IFR) to carry out reviews of the PTI. In short, it describes a scenario for accountable DNS management without the U.S. government's direct involvement.

Milton Mueller, professor at Georgia Institute of Technology School of Public Policy, said in a phone interview that the debate has changed in the past 10 years. A decade ago, he said, foreign governments were indignant about U.S. control over the Internet. Then came the Snowden revelations in 2013. "The Snowden revelations brought the matter to a head," said Mueller.

Yet, as much as other countries might resent US control, they recognized that at least the US could hold ICANN accountable, Mueller said.

The task now before the Internet community is to find a way to make ICANN accountable, and not to a single government but to this global multistakeholder community, which aspires to be governing body not beholden to any government.

Multistakeholder "is a codeword for self-governance by the Internet community," said Mueller. "That's new [as a governing structure] and that's why we're kind of groping along here."

The challenge facing the multistakeholder community is that it must reform ICANN, and do so in a way that doesn't alter the balance of power. Proposed reforms that would limit ICANN's power, Mueller said, could give governments a louder voice than they have presently in Internet governance debates. "If governments are controlling 20% of the votes in this new membership structure, they may not uphold these limits on ICANN's power," he said.

The ICG proposal is open for public comment until September 8. Among the six comments posted at the time this article was filed, several express concern about the diminished U.S. role and what it could mean for free speech. Pointing to the lack of freedom in countries such as China, North Korea, and Russia, a person posting under the name Michael Lesage wrote, "Basically, I fail to see the benefit of inviting certain parties to the decision-making process. Isn't it kind of like inviting the bullies to supervise the activities at recess, generally a very poor idea?"

At a Senate hearing in February, U.S. Sen. John Thune (R-S.D.), chairman of the Senate Committee on Commerce, Science, and Transportation, observed that while there are valid concerns that lack of US involvement with IANA functions could allow ICANN to be influenced by authoritarian regimes, he's also worried that a privatized ICANN "could become an organization like FIFA – the international soccer organization that is flush with cash, unresponsive to those it supposedly serves, and accountable to no one."

Thomas Claburn has been writing about business and technology since 1996, for publications such as New Architect, PC Computing, InformationWeek, Salon, Wired, and Ziff Davis Smart Business. Before that, he worked in film and television, having earned a not particularly useful ... View Full Bio
We welcome your comments on this topic on our social media channels, or [contact us directly] with questions about the site.
Comment  |
Email This  |
Print  |
RSS
More Insights
Webcasts
Automating Security Functions in Your Enterprise
[Free Virtual Event] Managing Apps in a Multi-Cloud Environment
More Webcasts
White Papers
[Forrester Research] The State of Data Security & Privacy
2020 SANS Cyber Threat Intelligence
More White Papers
Reports
Threat Intelligence Spotlight: Hunting Evasive Malware
The AI and Human Element Security Sentiment Study
More Reports