Welcome to the start of a new space race to the Red Planet. Find out what's coming in Mars missions during the next decade, and when humans might set foot on the planet. 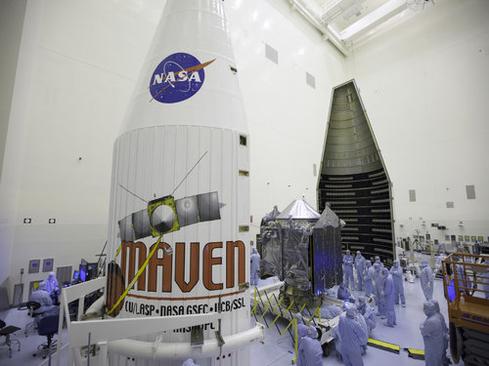 The craft hopes to show how and why the Martian atmosphere is leaking into space and to study the solar winds that constantly bombard the planet and, according to one theory, may be responsible for the loss of atmosphere. Solar wind is caused by the sun's release of plasma that contains highly energetic particles. On planets (like Earth) with strong magnetic properties, the solar wind is "deflected." Mars doesn't have such a strong magnetic field.

Researchers are also hoping they can get a sense of what Mars used to be like. Scientists believe that it once had a very thick atmosphere that kept it very warm and possibly able to support life. As the atmosphere thinned, the planet became colder, dryer, and less hospitable to life.

What Mars used to be like fuels a very interesting scientific question -- did Mars once have life? And it could also answer a strange but reality-shifting question -- are we Martians? One theory of how life was seeded on Earth is that Mars once had conditions much more suitable for microbial life than Earth did. It is possible that an asteroid brought some of those Martian microbes to Earth, where they helped change our atmosphere and eventually evolved into the plants and animals (and people) we know. Maven is not designed to answer either of those questions specifically, but the information could add to a growing list of puzzle pieces that are emerging around the question of life on Mars.

Those puzzle pieces are coming from a series of missions that began in the 1990s. The pace of Martian exploration is growing quickly, and it would have grown even faster if not for a series of unfortunate failed missions. These missions are trying to build a case about whether there was once life on another planet.

And they also serve as building blocks toward putting people on Mars. There are many missions planned to arrive at Mars in the next 5-10 years that could culminate in setting foot on an extraterrestrial world for the first time, possibly as early as 2023. From missions to investigate the atmosphere to studies on the soil content all the way to plans to send ships to the surface and come back safely, it is a great time to study Mars. Click the slideshow to see what missions are planned for the near future, and learn how scientsts are working to put a person on Mars during our lifetime.

@Mak63- Well, I suspect they have a lot of good options. Also, I suspect that they are slowing down the selection because they know the technology isn't ready.
Reply  |  Post Message  |  Messages List  |  Start a Board

@kstaron- I doubt there's room for a cooling off room. I suspect the best you can hope for is to roll over and look out the window. I can imagine after 501 days you're tired of hearing the other person breathing.

Still, I have to say, the idea of 501 days of time with my wife with no major job, no daily life distractions, no phone ringing or anything sounds appealing. I'd just prefer it on a beach in Hawaii. :)
Reply  |  Post Message  |  Messages List  |  Start a Board

@Charlie- If Pizza Hut gets there first, maybe you cna go. I'm starting to feel like commercial (or at least non-government) missions seem to have a better chance at succeeded. I can imagine Pizza Hut or Starbucks or some big brand wanting to put a franchise on Mars as part of a sponsorship deal.
Reply  |  Post Message  |  Messages List  |  Start a Board

@ubuda301- I think you are right. There was a recent report that came out thast said NASA's "flexible approach" is making harder for them to get to Mars. They are not building MArs specific vehicles. They are still talking about how the rocket they are making could take them to the moon, a near-earth asteroid or Mars.

Charlie has finally found a weakness in Amazon's distribution system, LOL. Seriously, I hope to experience space travel in my lifetime. I would love to take a trip to fly around the moon instead of to Florida for once in my old age. And I love Florida.
Reply  |  Post Message  |  Messages List  |  Start a Board

@Some guy- I see your joke there. But there's a serious point. The best part about the voyages of discovery are that they yielded unexpected benefits (though we'd be remiss without mentioning unexpected negative impacts as well). Improved ships, better navigation, a general boost in technology. Forget the economic benefits and you still see value. Add those economic ones (which admittedly carry cultural baggage) and it is a slam dunk for anyone except who the Europeans dunked on.

Count me as fainthearted, but I am not seeking a seat on the first human-occupied spaceship heading for Mars. I like to travel but a destination 450 million miles away would use up all my combined frequent flyer miles. Just getting a pizza delivered takes ForEver, and even Amazon Prime doesn't make deliveries there, and I thought they had distribution centers everywhere.
Reply  |  Post Message  |  Messages List  |  Start a Board

@ArijitR071- I'm sorry you don't like the characterizaiton. I meant no offense. You have every right to brag. You SHOULD brag. You got a craft to Mars. You did it with what appeared to be ease and skill. You did it cheaply and it will be the first of many great successes.

If you didn't brag about that, I don't know what you get to brag about.

More importantly, I quoted the source of the bragging in the article. And frankly, it is a great brag. Hollywood can't make pretend space for less than India brought us real space. In every way it was meant as a compliment.

But again, I apologize for offending. That was not the intention at all.
Reply  |  Post Message  |  Messages List  |  Start a Board

@billbo31- Well, I won't argue over the debt itself. But i will say there are two ways out of an economic problem-- you can shrink your spending and sit in a shell for decades or you can grow your wealth. The space program has a long trakc record of creating products with commerical viability, and the NASA budget is a tiny fraction of the federal budget. Investing in the country's future needs to be a part of any budget.
Reply  |  Post Message  |  Messages List  |  Start a Board

@Staphne Parent- It is interesting. They're both very daunting. Going and returning is hard. Going and staying is just as hard. Surviving the radiation, learning to deal with the different gravity, getting enough water for people and for growing food, learning to live on a diet of what can grow there, medical care and dealing with the isolation are just some of the obvious problems.