Fixing how federal agencies purchase and manage IT will take top leadership and new approaches, say the authors of a new report.

The federal government spends more than $80 billion annually on information technology, while state and local governments spend an additional $100 billion. Yet only about 6% of large federal IT programs succeed, according to David Wyld, professor of management at Southeastern Louisiana University and coauthor of a new report that examines what's wrong with government IT and how to fix it.

Throughout the report -- which is based on interviews with experts within and outside the government -- Wyld and coauthor Raj Sharma, CEO of Censeo Consulting Group, discuss how federal agencies purchase and manage IT, and why many programs fail. "This is not about IT procurement, but more about the way we solve big problems. Right now, the way we run IT programs is fundamentally flawed. We've erected enormous barriers to entry, limiting innovation and competition," Sharma told InformationWeek Government. 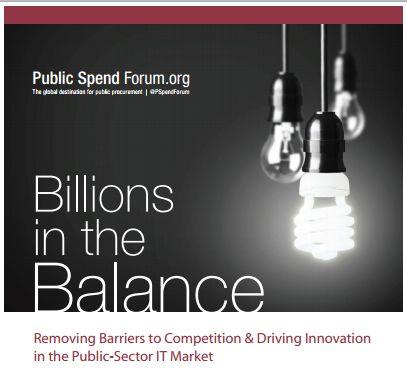 The authors argue that there are five main factors to blame for what's wrong with government IT:

[For more on federal IT problems, see GAO Spotlights 190 Troubled IT Projects.]

When asked what agencies are doing wrong, Wyld said in an interview with InformationWeek Government, "The problem is that when you are talking about federal IT programs, you are dealing with projects that literally span a decade or more, cost billions -- even tens of billions of dollars -- and are consistently over budget, behind schedule, and not making things better. In fact, oftentimes agencies will find that they are worse off than when they started a big IT-focused project, and that's what's really disturbing about all of this."

While solving those problems will require patience, agencies don't have to wait years for major reform legislation, the report argues. "I do think that the situation can be turned around, but it will take top leadership actions and radically different approaches," Wyld said. "Few agencies have piloted different ways of doing things, such as breaking down huge projects into smaller, more targeted and manageable chunks and aligning everyone to project success. This is particularly true when it comes to getting procurement and IT to really work together."

The report makes several recommendations for fixing government IT. Examples include establishing clear lines of authority and accountability; using a "needs and outcomes" statement to set project goals instead of lengthy request for proposals (RFPs); engaging the market early; developing a return on investment-focused program strategy; and taking smart risks. Another recommendation is reducing requirements to allow for more meaningful competition.

The report also points out that it's not just an IT issue. Improving IT project success in government can go a long way toward restoring the public's faith in government, said Wyld. Less wasteful IT spending means those funds -- whether in the hands of the government or taxpayers -- can be put to better use.

Elena Malykhina began her career at The Wall Street Journal, and her writing has appeared in various news media outlets, including Scientific American, Newsday, and the Associated Press. For several years, she was the online editor at Brandweek and later Adweek, where she ... View Full Bio
We welcome your comments on this topic on our social media channels, or [contact us directly] with questions about the site.
Comment  |
Email This  |
Print  |
RSS
More Insights
Webcasts
Securing and Monitoring Networks in the 'New Normal'
ROI and Beyond for the Cloud
More Webcasts
White Papers
A Technical Deep Dive on Software Exploits
The Trouble with Phishing
More White Papers
Reports
Special Report: Edge Computing: An IT Platform for the New Enterprise
DNS Network Traffic Volumes During the 2020 Pandemic
More Reports
Copyright © 2021 UBM Electronics, A UBM company, All rights reserved. Privacy Policy | Terms of Service