In a sudden reversal, the US Immigration and Customs Enforcement agency cancelled plans announced earlier this week to develop a national license-plate tracking system.

ICE, a division of the Department of Homeland Security, had posted a notice saying it was seeking proposals from companies to develop a database and notification system that would aggregate license-plate information gathered from various commercial and law enforcement tag-reading systems.

But top officials at the immigration enforcement agency and DHS were caught off guard by the solicitation, which sparked a flurry of public concerns by privacy advocates. DHS secretary Jeh Johnson ordered the proposal be cancelled, according to an Associated Press report.

"The solicitation, which was posted without the awareness of ICE leadership, has been cancelled," confirmed ICE spokeswoman Gillian Christensen, in a statement. "While we continue to support a range of technologies to help meet our law enforcement mission, this solicitation will be reviewed to ensure the path forward appropriately meets our operational needs."

The contract notice fueled growing public concerns about the government's surveillance of US citizens. While ICE officials said the proposed database would only be used in conjunction with ongoing criminal investigations or to locate wanted individuals, privacy advocates complained the database system would allow the government to track the daily movement of virtually every citizen who drives a car. 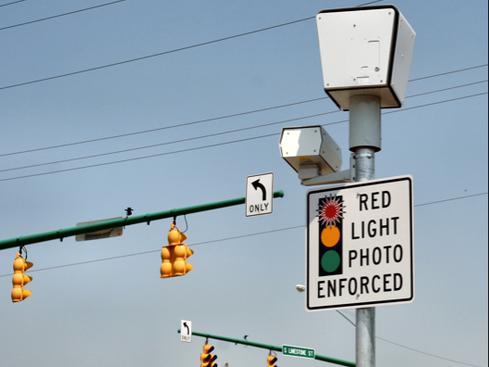 The sudden turnabout on the contract solicitation also raised concerns about management at ICE.

The public posting of the contract solicitation without the knowledge of ICE leadership "highlights a serious management problem within this DHS component," said Rep. Bennie G. Thompson (Miss.) in a statement in the Washington Post. Thompson, the ranking Democrat on the House Homeland Security Committee, noted that ICE currently does not have a director nominated by the president. He urged ICE leaders to work more closely with DHS privacy and civil liberty officers.

The National License Plate Recognition (NLPR) database service that ICE had proposed would have given immigration enforcement officers enhanced access to the license-tag information already available to law enforcement agencies, according to an ICE solicitation document that had been available on FederalBizOps.gov, but has since been removed.

The system would have allowed agents to upload license-plate information on any vehicle, via smartphone, and check it against a list of suspected fugitives.

Even with the cancellation of the agency's license-plate tracking system, citizens won't be able to escape the electronic eyes of tag-reading systems now commonly used on the nation's toll roads, in parking garages, and many other commercial locations. State and local law enforcement agencies have been pooling information from those systems for nearly a decade and continue to gather more information as the cost of surveillance equipment grows cheaper and data analytics systems become easier for agents to use directly.

Wyatt Kash is a former Editor of InformationWeek Government, and currently VP for Content Strategy at ScoopMedia. He has covered government IT and technology trends since 2004, as Editor-in-Chief of Government Computer News and Defense Systems (owned by The Washington Post ... View Full Bio
We welcome your comments on this topic on our social media channels, or [contact us directly] with questions about the site.
Comment  |
Email This  |
Print  |
RSS
More Insights
Webcasts
Disaster Recovery/Business Continuity in the New Normal
4 Practical Tips for Building a Data Lake
More Webcasts
White Papers
VPN Risk Report
The Importance of Multi-Source Threat Intelligence
More White Papers
Reports
[Tech Insights] SASE's Pandemic Boost Likely to Stick
Dark Reading Report: Battle for the Endpoint
More Reports

...and one can only imagine that if we're ever ordered to "Step out of the car!" our new wearable devices will continue tracking our movements too.  We used to joke about dropping off the grid. Good luck!
Reply  |  Post Message  |  Messages List  |  Start a Board

Privacy advocates seem to get a win, but as you say there are already several other ways we're tracked -- multiple cameras, our own phones, toll payment systems -- so it's a hollow victory. Add in the soon-to-be mandated automatic communications in cars, and it won't matter anyway. Our vehicles themselves will give us away!
Reply  |  Post Message  |  Messages List  |  Start a Board

The fact that DHS Secretary Jeh Johnson pulled the plug on what amounts to an IT project suggests that there was probably more at issue here than an overly ambitious data-gathering initiative and a flare up from privacy advocates.  Reading the contract solicitation (before DHS took it down), it appeared this was another custom government IT project in the making that added some features, but otherwise duplicated what's already out there.

You probably can't fault the good intentions of ICE officials trying to help their field agents work smarter. But it does look like a case where proper supervision was missing.
Reply  |  Post Message  |  Messages List  |  Start a Board
InformationWeek Is Getting an Upgrade!