12 Open Educational Resources: From Khan to MIT
(click image for slideshow)
Drupal is one of the most popular Web content management systems in higher education, but that doesn't mean every university uses it effectively.

Scott Lozier, a senior Web developer at Bentley University in Waltham, Mass., says the open source CMS was already in use there when he arrived about a year and a half ago, but it was being used in a scattered way.

"They were using Drupal just like WordPress," he said, meaning that the developers would set up a new instance of the software with its own front-end design and back-end database for every new site. "It became very unmanageable for them, and one of my tasks was to come up with a more enterprise-level solution." By centralizing more of that effort, Bentley has been able to give all its major public-facing sites a consistent look, using a common design based on the Drupal Zen theme. Because Zen includes a grid layout that adjusts to the size of the viewer's screen, it is helping the university implement a responsive design for phones and tablets as well as PCs.

[ Hot or not? Read Maxim, Drupal, And The Hometown Hotties. ]

That requirement is one reason for Drupal's popularity in higher education, according to Tom Wentworth, chief marketing officer at Acquia, which provides commercial support for the open source software. "Imagine trying to recruit a student without a fantastic mobile experience these days."

Website logs show mobile visitors account for about 10% of the traffic to Bentley's marketing and admissions websites, but that traffic has grown 127% over the past year, Lozier said. "We're also looking forward to the future, too, where it's going to become more and more important." 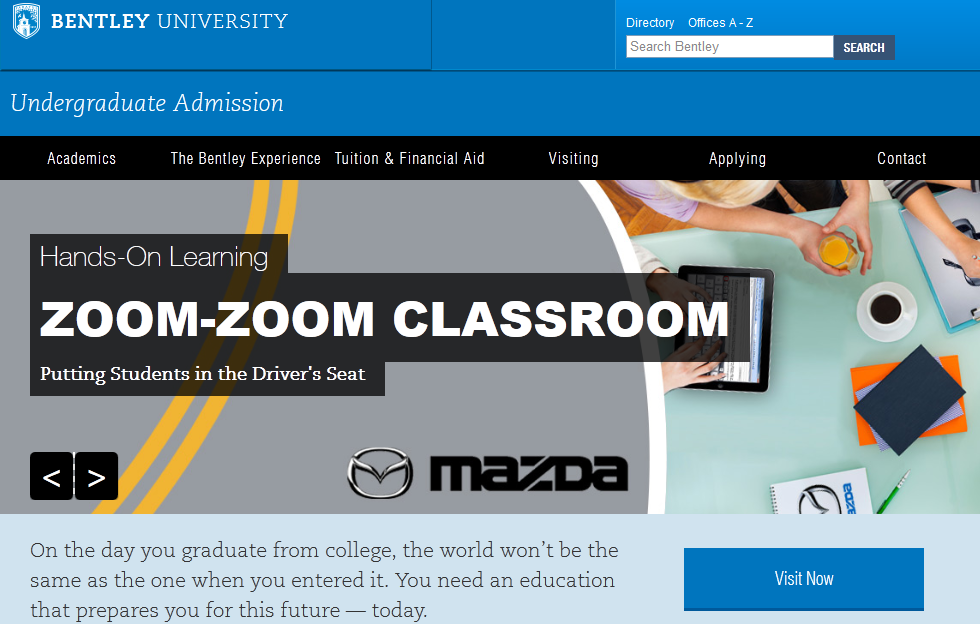 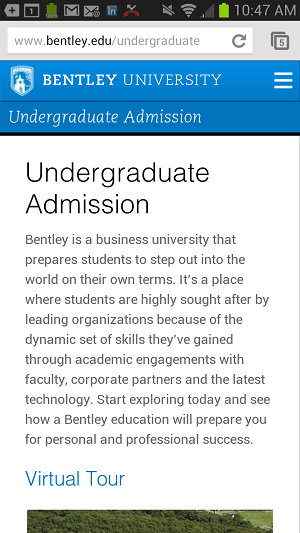 The admissions page resizes to fit an Android phone screen.

Lozier said the Zen theme also handles a lot of basic Web design challenges, such as browser-specific hacks to CSS formatting code to deliver a consistent design to every Web user. "[The pre-packaged code] built out a lot of those things for us, things that just would have taken a month for us to do and we might not have been able to implement as well," he said.

According to Acquia, Drupal is used by 71 of the top 100 universities. Of course, that doesn't mean Drupal is all they use for Web content management.

At Bentley, as at his previous employer, Harvard, Lozier has found technology choices to be "very fractured," and his effort to standardize on Drupal is limited to the team that works with marketing communications on the university's public image, as opposed to academic computing or websites for student groups. Many of those are running WordPress, the open source product Lozier repeatedly cited in contrast to Drupal.

Lozier did concede that WordPress provides a more user-friendly authoring and editing environment, a result of its design as a blogging tool first and foremost, with broader content management capabilities layered on top. Drupal is more modular and can be configured many different ways, with multiple options for blogging and Web page management, which also makes the authoring and editing experience more variable. ""Drupal's come a long way, but there's still progress to be made," Lozier said. Wentworth said the introduction of the Spark authoring tool should up the ante for Drupal.