Taposé's Split Screen For The iPad: A Visual Tour - InformationWeek

Taposé (pronounced "tap-oh-ZAY"), a new note-taking app by Zanther, Inc., addresses a problem a lot of iPad users probably wish they didn't have to endure: switching back and forth between two full-screen apps in order to copy and paste items. Taposé lets you split the iPad screen into two side-by-side panes. It comes with five apps that work in the dual panes: Journals, a note-taking app; Web, an integrated browser; Maps, a subset of Go 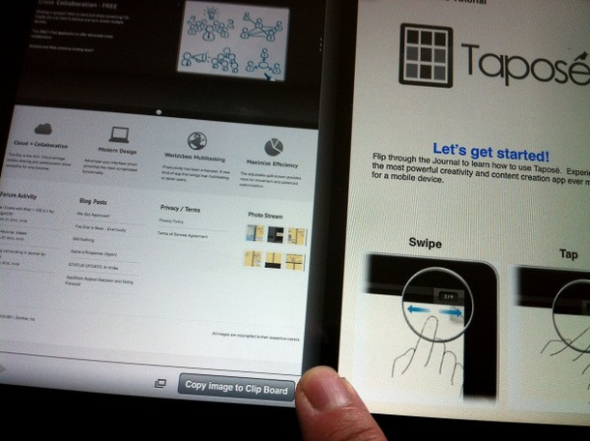 Available in the App Store for $2.99, Taposé was inspired by the never-released dual-screen Microsoft Courier tablet. It launched as a Kickstarter funded project and surpassed its $10,000 goal on May 21, 2011, ending with $26,561 pledged to the project. The two-person development team reportedly even attracted a pledge from J. Allard who led Microsoft's Courier tablet project before leaving the company. Taposé is similar to Microsoft Windows 8's snap feature, which lets two normally-full-screen Metro apps appear in two panes, but Taposé's multitasking capabilities are much more limited.