Google infringed Oracle's copyrighted Java APIs when it created its Android operating system, a jury in San Francisco decided on Monday. But Google did not violate Oracle's Java documentation copyrights, the jury found.

Delivering a partial verdict after more than four days of deliberation, the jury could not agree on whether Google's use of Oracle's APIs was defensible as fair use.

Here's how Oracle's legal team graphically depicted the issue to the jury: 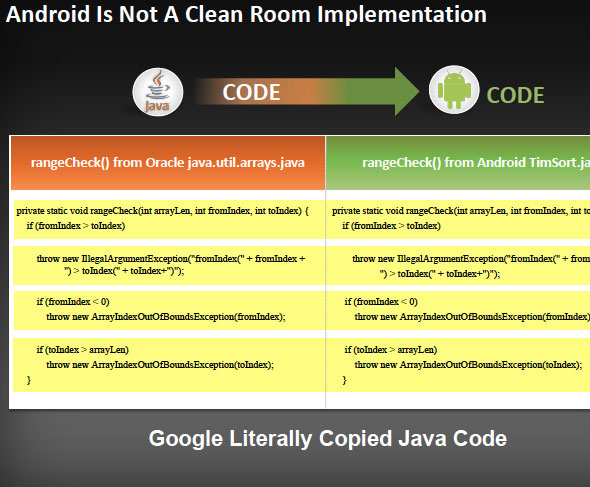 The test for whether infringement is allowable as fair use depends on the purpose of the copying, the creativity of the copied work, the quality and quantity of copying, and the effect the copy has on the market for the original.

In response to the incompleteness of the jury's ruling, Google moved for a mistrial. The judge hearing the case, William Alsup, will consider Google's argument in support of its motion later this week.

The trial, pending since last August when Oracle filed its lawsuit against Google, began in mid-April and is expected to continue through May: Oracle's two patent claims have yet to be considered. Oracle initially sought $1 billion in damages. Presently, it appears Oracle is unlikely to win any more than $100 million, even if it prevails in its patent claims.

Google's copyright infringement--nine lines of code in the rangeCheck method in TimSort.java and ComparableTimSort.Java, code since excised from Android--may not by itself be enough for Oracle to win significant damages. After the jury delivered its verdict and left the room temporarily, Judge Alsup rejected Oracle counsel David Boies's claim for "infringer's profits" from the nine copied lines as "bordering on the ridiculous." The amount of any penalty imposed on Google won't be known until the conclusion of the patent phase of the trial, which began on Monday immediately following the partial verdict.

[ What is the possible fallout for developers from this case? Read Oracle And The End Of Programming As We Know It . ]

Judge Alsup has also indicated that he will rule on whether APIs can be copyrighted if infringement has been found. Google insists APIs cannot be copyrighted and a recent EU court decision supports that view. Last week, the Court of Justice of the European Union ruled in SAS Institute Inc. v World Programming Ltd. that neither the functionality of computer program nor the format of its data files are expressive enough to merit copyright protection.

"We appreciate the jury's efforts, and know that fair use and infringement are two sides of the same coin," Google said in an emailed statement. "The core issue is whether the APIs here are copyrightable, and that's for the court to decide. We expect to prevail on this issue and Oracle's other claims."

Oracle also thanked the jury for its service in a statement that cast Google as a license scofflaw. "The overwhelming evidence demonstrated that Google knew it needed a license and that its unauthorized fork of Java in Android shattered Java's central write once run anywhere principle," the company said. "Every major commercial enterprise--except Google--has a license for Java and maintains compatibility to run across all computing platforms."

The infringement ruling comes at a time when Google faces the imminent possibility of formal antitrust investigations of its search business in the U.S, Europe, Asia, and South America.

We welcome your comments on this topic on our social media channels, or [contact us directly] with questions about the site.
Comment  |
Email This  |
Print  |
RSS
More Insights
Webcasts
What We Can Learn from Sports Analytics
The Failures of Static DLP and How to Protect Against Tomorrow's Email Breaches
More Webcasts
White Papers
How to Prioritize Risk Across the Cyberattack Surface
Presenting Your Cloud Security Strategy to the Board
More White Papers
Reports
2020: Threats in Review
Building an Effective Cybersecurity Incident Response Team
More Reports

"Google's Android work with it sanctionned by Sun Microsystem"

Talk about ignorance and bias! If that's the case, why all the emails between Rubin and his buddies about side-stepping Sun's licensing? I think you need to get the taste of Eric Schmidt out of your mouth and then try thinking straight for a change.
Reply  |  Post Message  |  Messages List  |  Start a Board

And if that's all there were to this story, Google would be off-the-hook. Problem is all those emails amongst their corporate execs talking openly about whether they should license Java or just make an end-run around Sun. They knew what they were doing and understood the questionably legality of it but did it anyway. There's a question of due diligence here, and it's obvious Mr. Rubin and his cronies felt they were above that kind of thing.

If you think Google isn't going to take a beating for this, you're delusional.
Reply  |  Post Message  |  Messages List  |  Start a Board

I totally agree that there are "programmers" and then there are Programmers. But... did you read the 9 lines of code that got Oracle its ruling? It's a function that checks whether a number is within the given range, and throws exceptions if not. That's all it does -- this is totally trivial code that any programmer (air quotes *or* capital-P) could crank out in their sleep. And probably every other implementation would look exactly the same. You can only be so creative when writing code this trivial. It's not like Google stole some deep engineering secrets from Oracle here.
Reply  |  Post Message  |  Messages List  |  Start a Board

Your ignorance and bias is showing. Java was open source and Google's Android work with it sanctionned by Sun Microsystem, the authors, that you choose to side with the obvious and shameless copyright/patent troll in this case is ludicrous.
Reply  |  Post Message  |  Messages List  |  Start a Board

Please don't downplay the art and creativity of writing code. This is NOT HTML / CSS as the term programmer has TOTALLY gotten out of control. If you write HTML / CSS then that is closer to being a hacker than a Computer Scientist. Sorry, to break your hearts, but I'd like to see you webmaster tackle data structures and algorithms applicable to linear algebra and diff EQ. Oracle has every right to this ruling. Here is the real issue. Why didn't Google just pay for the licensing to use JAVA in a commercial way? That's actually pretty cheap as a solution. Hmmmm. Why keep secrets via lack-of-license-purchase behavior? Why Google?
Reply  |  Post Message  |  Messages List  |  Start a Board

It's about time Google gets what's coming to 'em. It's long overdue. They've repeatedly stolen IP and thrown their weight around in subverting copyright. I know a lot of you don't give a rip about that because you're such big fans of Google but the point is that a lot of what Google does with regard to the property of other companies is illegal--like it or not. Besides, it's easy to write this off when you're not the one being stolen from. Suppose you designed some great software or system and some big corporation with deep pockets came along and copied all your hard work and gave it away for free? You wouldn't be so eager to shift into apologist mode then, would you?
Reply  |  Post Message  |  Messages List  |  Start a Board

This is a perfect example of how computer programming patents have become so stupid. Oracle is claiming that those 9 lines of code are their original creation when Java itself was derived from C++, which does have range checking in its code.
Reply  |  Post Message  |  Messages List  |  Start a Board

The jury did not rule that "Google copied Java." They ruled that Google copied nine lines of code from Java by mistake. The code has virtually zero monetary value as Oracle's expert said in the trial. Everyone, including Google, knew that they were going to lose on those nine lines. The real question are the APIs. APIs have always been ruled to be non-copyrightable. There are literally decades of legal precedent Oracle is seeking to overturn. This was a win for Google. Oracle needs to prove two things to win a meaningful victory. 1) APIs are copyrightable. 2) You can enforce those copyrights (not fair use). The judge basically told the jury to assume number 1 (presumably so he can rule that as a matter of law APIs are not copyrightable). The jury was deadlocked on 2. Oracle needed the jury to rule that at least APIs are not fair use so they could then start the fight to overturn decades of precedent around 1. They didn't get 2 and it is highly unlikely they will get 1.
Reply  |  Post Message  |  Messages List  |  Start a Board

If it is all based on that small section, imagine how many other procedures/routines may be open in future cases. Are there websites, such as those for plagerism, that programmers can go to verify their code against after they finish writing a section?
Reply  |  Post Message  |  Messages List  |  Start a Board
Page 1 / 2   >   >>
Editors' Choice
Hot Topics