Garage Band, Keynote, Numbers, iPhoto and others for Android were all apparently for sale in the Google Play store, but it was not to be. The programs were fake and have been removed by Google.

Security vendor Sophos is reporting in their NakedSecurity Blog that fake apps by "Apple Inc" were available in the Google Play store for Android apps. Google has removed the apps.

Garage Band, Keynote, Numbers and iPhoto are shown in the graphic (see below) in the Sophos posting. The apps were listed for sale at prices between $4.98 and $9.97. The contact e-mail address for the apps was listed as [email protected]

It's not clear whether the apps were just innocuous, bogus software, or if they were themselves malicious.

The Google Play store has a shady reputation compared to Apple's App Store. There have been many other examples of malicious or fake software that made it through the vetting process. 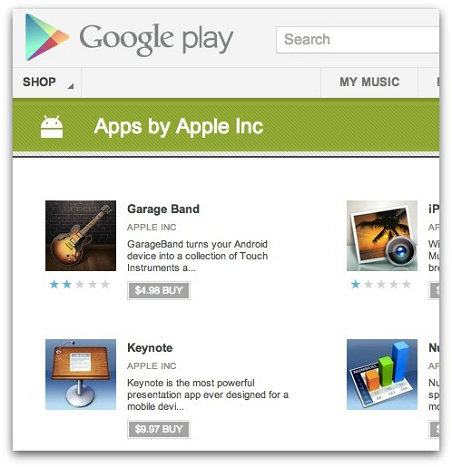