When Wi-Fi loses steam, iOS 6 can switch iPhone and iPad connections over to the cellular data network. Designed as a backup to Wi-Fi, is this new iOS feature all it's cracked up to be? Some users could end up with bigger cellular bills than they anticipated.

The new iOS 6 feature, Wi-Fi Plus Cellular, sounds like a good idea--but is it in the best interest of consumers? We at BYTE have been debating this a bit. Let's take a quick look and see exactly what the feature is designed to do.

Wi-Fi Plus Cellular is a new feature in iOS 6 that, when turned on, causes your iPhone or iPad to monitor the Wi-Fi connection for performance and, if the connection slows sufficiently, to drop it in favor of an EDGE, 3G, or 4G cellular connection. The idea is to ensure that data requests go to the intended network target and don't get stuck in limbo because the Wi-Fi network your device is connected to degrades. 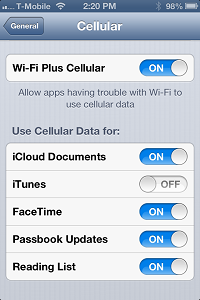 Most smartphones and tablets that have their Wi-Fi radios turned on will automatically switch from cellular to Wi-Fi when an active, approved Wi-Fi network is detected.

It's a great idea providing it is well-implemented. My data requests always get through to their network target as long as some kind of Internet connection is available. It's not hard to imagine potential problems, though:

How is the Wi-Fi Plus Cellular feature activated?
No, I'm not talking about the on-off switch. You can clearly see that in the Cellular section of General Settings. You get a simple on-off switch, and then the ability to determine which features revert to cellular data when Wi-Fi data craps out. I'm more concerned with the trigger--how does iPhone realize there's a dirty bit in the way, kill the active Wi-Fi connection, ignore the active Wi-Fi network it has credentials stored for in its keychain, and switch to its cellular connection?

How is Wi-Fi Plus Cellular deactivated?
On the other end of the equation, how is Wi-Fi reengaged when whatever conditions were preventing reliable communications through the radio have been resolved? This is especially important, as I can see where it would be a huge drain on your data plan if cellular data got stuck and the device couldn't switch back to Wi-Fi. If something goes wrong and Wi-Fi doesn't switch back, or things don't work like you would expect, your only recourse is to turn off Wi-Fi Plus Cellular or to forget a specific Wi-Fi network entirely.

Where are the notifications?
From what I have been able to see in iOS 6 Beta 4 so far, the device doesn't notify you in any way if and when it switches from Wi-Fi to cellular data. There's no new icon on the device's status bar. Nothing flashes on the screen to tell you that it's making the switch from one radio to the other. You also don't know when it drops IP addresses, or how long it will take to acquire a new one on the new connection. I understand this is supposed to be one of those "it just works" features, but there's a lot that can go wrong. It's not easy troubleshooting borked IP connectivity.

Apple needs to test the living daylights out of Wi-Fi Plus Cellular. Having a feature like this can be a big help, especially when you need to get out a critical communication such as a report or a presentation and you're having trouble connecting to the Internet. But it also undoubtedly will result in more people using the cellular network at a time in economic history when they might not want to run up a big phone bill, especially without their permission. In fact, iOS 6 could help the carriers' move to shared data plans when users find their cellular use spiking. Of course, this will give carriers even more reason to eliminate low-end data plans.

We welcome your comments on this topic on our social media channels, or [contact us directly] with questions about the site.
Comment  |
Email This  |
Print  |
RSS
More Insights
Webcasts
Hybrid Cloud: The Great Balancing Act
Nip Ransomware in the FUD: Detecting Attacks Pre-Encryption
More Webcasts
White Papers
iPaaS Intrigue: A Faster Path to Digital Transformation
How Secure Are Your Endpoints?
More White Papers
Reports
The Malware Threat Landscape
Special Report: Edge Computing: An IT Platform for the New Enterprise
More Reports