50%
Tweet
If you're lucky to be where they have signal then Karma, an $80 LTE hotspot, is a great deal. Karma provides free LTE hotspot bandwidth on the Clearwire network. Bandwidth costs $14/GB and you can earn 100MB by signing up friends.

Karma is a Wi-Fi hotspot with a twist – the hotspot is always open and the more people who connect, the more free data I get – 100MB for me and 100MB for each new person who signs on.

For dense urban environments it's a useful device, but stray far outside major population centers and you'll likely run into trouble getting service. Karma runs on the Clearwire network. You can find their coverage map here.

Karma costs $79.99, and at present it's only possible to order it online. Once it arrived, the setup was easy. I turned the hotspot power on, connected my laptop to the Karma Wi-Fi signal, and set up an account using my Facebook account to authenticate — that was it. In about five minutes I was browsing via Karma's hotspot.

The small, light, hotspot fits into the palm of my hand, and easily into pants and bag pockets. There are three indicator lights on one of the side panels – power, Wi-Fi and 4G. Each light changes color to indicate, for example, battery level or 4G connection status. I was a bit frustrated by the fact that there are only three indicators for power: green, yellow, and red; fancier hotspots have displays with battery levels as a group of bars, like the ones on phones. But, if I wanted to get a more precise reading on the battery level I could log into the Karma dashboard. 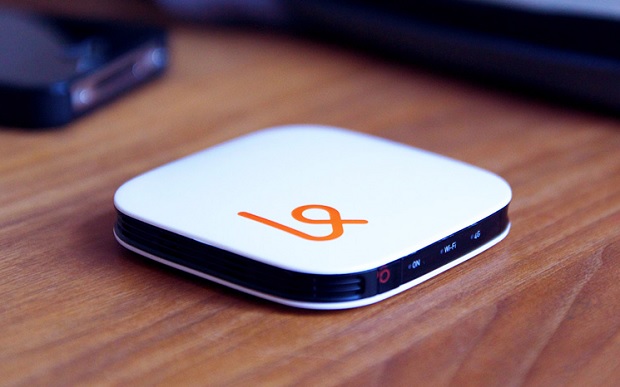 The dashboard is a clean interface that indicates the number of people currently connected to the hotspot – each additional new user gets 100MB, as does the hotspot's owner. One complaint about the dashboard and logging into the hotspot in general was that the connection via Facebook often didn't work, which was exceedingly frustrating. I wish that I originally created an account with an email address and password, instead of trying to use my Facebook account.

Without the free share megabytes, data costs $14 per gigabyte, with a $14 discount if you buy five gigabytes. It's a pay-as-you-go system with the added bonus that the data never expires, which I thought was interesting. The pricing is competitive – even with other low-cost carriers like FreedomPop, which BYTE wrote about a few months ago.

Before test-driving the social functions, I wanted to change its name from the default “Max's Karma," to something I thought would be more likely to attract people — to gain more free megabytes, of course. The dashboard presented three pre-typed choices, so I settled on “Max's Free Karma," hoping to tout the main benefit of the hotspot.

Once that was done I headed out into the wild to give Karma a real test. The coverage in San Francisco was decent, but there were some noticeable gaps. For example, while driving and getting directions from Google Maps on my Nexus 10, Karma dropped the signal a few times over about an hour of running errands.

There are some odd holes in the coverage. If you're familiar with San Francisco, there is almost no coverage in the Marina district, and you're pretty much out of luck if you work at Lucasfilm in the Presidio or live in Pacific Heights. There are some other weird holes – like a half block between 5th and 6th avenues, and another small uncovered patch nearby. It wasn't a deal breaker for me, but if you're thinking about getting one of these, it's a good idea to check carefully what is and isn't covered in your area.

When I was connected, the LTE network performed well – in some cases reaching speeds that were close to my home DSL network's speed for downloads, and most of the time beat my DSL connection on the upstream side.

The social component was something of a disappointment. After testing the device for about a week, I didn't receive any free megabytes while using the hotspot from my office or the various coffee shops I visited. I think that's because most coffee shops in San Francisco have free Wi-Fi – according to Yelp, there are only two paid Wi-Fi coffee shops within city limits. One is in the Marina district – and not covered by Karma. And when I ventured to the other, I couldn't get a LTE signal on the Karma. I tried inside and outside but eventually gave up and returned to my office to file this review.

I thought of trying the Karma on MUNI, the public transportation system in San Francisco, but with smartphone and tablet theft being a serious problem, I didn't want to risk it. Caltrain, on the other hand, the commuter train that services Silicon Valley, doesn't have Wi-Fi, or the same problems with device theft. But Caltrain does have plenty of tech workers and the corridor also looks to be covered all the way down the peninsula to San Jose — aside from a small patch right around the station in San Francisco. So while I didn't test it out there, I think that's a likely spot where Karma would get a lot of extra megabytes. 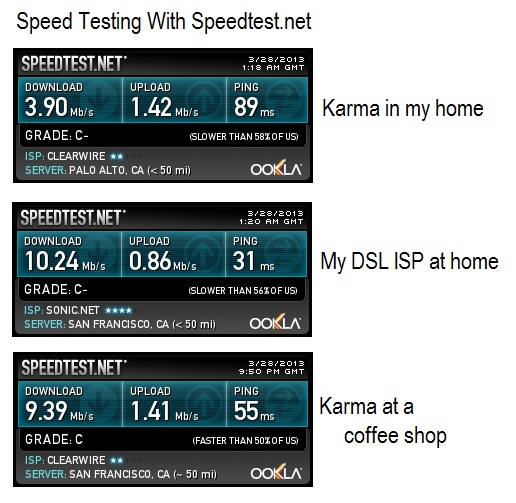 Much like FreedomPop, Karma is an inexpensive way to get LTE service — if there's a signal available. Since coverage is limited, and service is spotty even in areas where the company claims to provide coverage I recommending trying Karma out for a few days before keeping the hotspot (the company has a generous return and refund policy). The pay-as-you-go data plan is an intriguing way to buy data, so long as it's not a primary source, it would get expensive. But, if Wi-Fi is as common as it is in San Francisco — since it's available in places like public libraries, coffee shops and other public accommodations — it will be hard to rack up many free megabytes with Wi-Fi shares.

If you're lucky to be where they have signal then Karma, an $80 LTE hotspot, is a great deal. Karma bandwidth costs $14/GB and you can earn 100MB by signing up friends.

Price: $79.99 for the hotspot; $14/GB of data; $70 for 5GB
Pros: Cons:
We welcome your comments on this topic on our social media channels, or [contact us directly] with questions about the site.
Comment  |
Email This  |
Print  |
RSS
More Insights
Webcasts
Enterprise Database Strategies for 2020
Securing Active Directory the Way it Deserves
More Webcasts
White Papers
Wired vs. Wireless LAN Solution
2020 State of Malware Report
More White Papers
Reports
Online Threats -- and What Your Org Can Do About Them
[Special Report] Remote Network Management
More Reports