Windows Fits in on the Mac With Parallels 8 - InformationWeek

Parallels Desktop 8 for Mac is the best way to turn your Mac into a Windows machine. The new version lets Windows running in a virtual machine, including Windows 8, take advantage of Mountain Lion features such as dictation.

For many generations now, Macs have been more than powerful enough to run Windows effectively in a virtual machine. I bought my first Mac to run Windows, although at the time I used Apple's dual-booting Boot Camp. Then I switched to Parallels Desktop 7 and things got a lot easier.

Now Parallels is better than ever. The latest version, Parallels Desktop 8, lets Microsoft's Windows 8 run side-by-side with OS X 10.8 (Mountain Lion). Let's take a look at this popular virtualization environment and see if it's right for you.

Minimum requirements for Parallels Desktop 8 are the Mac OS X 10.6.8 (Snow Leopard) or later, an Intel Core 2 Duo processor, 4 GB of RAM, and 15 GB of disk space for each virtual machine.

Installing Parallels Desktop 8 is easy enough; it runs like any other Mac installation routine. There are a couple of things you need to be aware of, though.

The software does not technically upgrade. Software upgrades usually copy new, updated components on top of existing, installed components. If you are upgrading from any other version of Parallels Desktop for Mac, the installation routine for Parallels Desktop 8 for Mac removes any previously installed version, registered or not. It should retain all of your configuration and VM preferences and the VMs themselves once the installation of the new version is completed.

Installing the Parallels Tools update is tricky. After the software is installed and you run a VM for the first time under Parallels Desktop 8, it wants to install an updated version of Parallels Tools. Parallels Tools lets you share your Mac's hardware such as USB ports, wired and wireless network adapters, and sound card with Windows. The utilities also map specific Windows libraries and drives with your Mac equivalents.

Parallels also enables Coherence Mode, which is what lets you run Windows apps side-by-side with Mac apps. You can share the clipboard between OS X and Windows and the Mac keyboard shortcuts will work in either OS. Although you could do all of these things in Parallels Desktop 7, it feels really solid and more natural in Parallels Desktop 8. 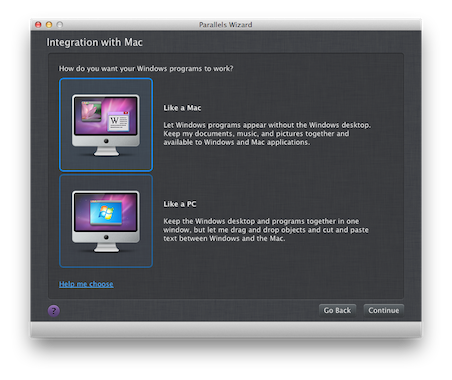 Now for the tricky part. Installing the utilities sends an "unmounts" notification to the Notification Center in Mountain Lion indicating that your VM's C drive has been unmounted. It seems it doesn't actually unmount, as Windows and the install routine continue to run. It also finds "new" hardware components and installs some drivers that appear to interrupt the installation of Parallels Tools. Then it tells you to restart Windows.

Whatever you do, don't restart Windows.

Here's what you do instead. When presented with Restart Now and Restart Later buttons, click Restart Later. The installation of Parallels Tools is still running, despite the fact that the installation dialog and progress bar have disappeared. If you wait a few minutes, it will reappear, and continue where it left off.

What has happened is that the Windows video drivers are busy updating, and the screen flashes while all of this is going on. You are led to believe that you need to restart, but you don't have to. If you do restart, you'll run into some very serious problems.

So this time, when the new device drivers are installed while Parallels Tools installs comes up, click Restart Later.

Whatever is behind the problems I had, they might not affect you, or by the time you read this, Parallels might have fixed them. But be alert.

Setting Up A New VM 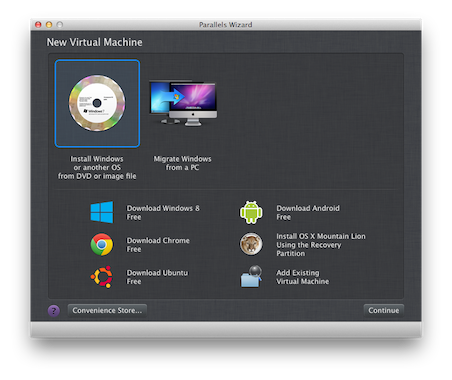 Comment  |
Email This  |
Print  |
RSS
More Insights
Webcasts
Detecting and Preventing Insider Data Leaks
Cybersecurity's Next Wave: What You Should Know
More Webcasts
White Papers
Why Add Security to Your Skill Set and How to Do It
The Hidden Security Risks of APIs: How to Protect Your Brand, Business, and Data
More White Papers
Reports
The Infoblox Q4 2020 Cyberthreat Intelligence Report
The State of Threat Detection and Response
More Reports