50%
Tweet
Microsoft Windows has hit more than a few bumps in its 27-year history. As Windows 8 launches, let's review some of the low points. 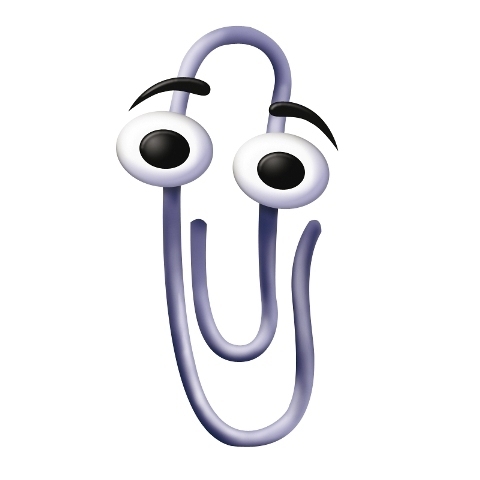 Even now, who can forget (or forgive) Clippy, the animated paperclip? The "office assistant" could serve as the poster child for Microsoft's questionable choices since releasing Windows Version 1.0 on November 20, 1985.

Initially released with Office 97, Clippy was supposed to help users with routine tasks, such as formatting a letter in Microsoft Word. The paperclip was the default character, but others were available, including The Genius (a caricature of Albert Einstein), Power Pup (a dog), and Will (a caricature of William Shakespeare).

Alas, Clippy was despised by users almost immediately for its obtrusiveness. Even so, Microsoft kept pieces of the always-cheerful helper for years. Finally bowing to public opinion, Microsoft made fun of its own creation in a Web campaign in 2001, in the runup to Office XP.

"Office XP works so easily that it's made Office Assistants like me useless. Obsolete. And, I'm told, hideously unattractive," Clippy said on the Microsoft site.

The feature was removed altogether in Office 2007 and Microsoft Office 2008 for Mac.

While not on par with the Windows Vista upgrade fiasco, Clippy reminds us of two elemental truths: First, even a small interface problem can turn happy, content users into a snarky, exasperated mob; second, new features, no matter how innovative or well-intentioned, will alienate users if the tweaks get in the way of getting things done.

Animated paperclips aside, the stakes are much higher for Microsoft these days. In July, the company reported its first-ever quarterly loss. And the company, which has a rocky history selling hardware--remember the Origami?--has now embarked on its first-ever foray into the PC hardware market with its Surface tablet.

In fact, Microsoft has been preparing for the shift away from PCs for at least two years. The question is, can the world's biggest software company make this critical transition smoothly, without a critical misstep?

Can the Windows 8 transition avoid a big blunder? One thing's certain: The Windows 8 critics are already lined up, as InformationWeek's Paul McDougall recently wrote.

Dig into our slideshow for a brief history of memorable Windows goofs and gaffes.

So they should have stayed with Symbian? Or WebOS (nee PalmOS, recently sold by HP to LG to run their Washers)? Windows CE (Windows Phone pre 8) has a smaller memory footprint and better hardware response than Linux (e.g. Android) (Toyota's unintended acceleration was Linux). (Symbian usually included JME, q.v. Android's Java presentation interface, and it looks like Java is going to be a non-starter under Oracle.) The Nokia-Microsoft partnership also includes wireless/ARM(cpu) giant Qualcomm
Reply  |  Post Message  |  Messages List  |  Start a Board

Moronic slide show. Reflects ignorant journalism masquerading as IT knowledge. "Clippy", Microsoft Agent implementation of Office Help was crippled by inadequately designed help documentation; never provided help for real problems. Liked by average user, hated by professionals. MS Agent was the "Siri" interface of its time, limited by technology (inadequate hardware speed). Bob was a generic implementation of Packard Bell Navigator, well liked by novice users not familiar with computer GUIs. (Packard Bell was hated by the build-it-yourself types, derided as "proprietary". Compaq, HP, IBM, NEC, and rest of top manufacturers used proprietary designs also and Intel actually built PB computers as well as mail-order-PB Gateway's computers.) Bob 2.0, unreleased, was awesome but limited to top speed systems of the time. Vista was designed for administration by Enterprise Domain Administrators, but did not allow power users to administer their own machine (unless they Group Policy). Most average users from company executives to bank tellers to mom'n'pop liked Vista, lazy power user types did not. HTML rendering issues? Do I really want to see email marketing fill up my inbox, perhaps I didn't see the problem because I deleted them without reading. MS had Pen Windows available before the Apple Newton (makes Apple a Tablet failure?) and MS has consistently supported touch based industrial computers. I had a Nokia Tabet with REAL Linux OS in 2007 (not Google's crippled Android OS) which came out before telco subsidized smartphones opened the tablet market. And messaging on Google has only grown a fraction of Facebook, Twitter, et al. Does anyone actually use Google+?
Aero, Ribbons? Many of the Vista visual interface changes were adopted, for better or worse, by open source (e.g. X windows) systems. RPCs were derived from Rashid et al from their (network centric) BSD Unix experience.
Remember that Microsoft does extensive Usability testing as well as incorporating "alpha" and early round and "community preview" (250,000+ users) beta testing. (note: average users not journalists are not the target audience for testing.)
Reply  |  Post Message  |  Messages List  |  Start a Board

Wow, I felt like I had opened a time capsule when I clicked through to slide 2 and saw the screenshot of Bob. I was 10 when this was released, and I remember disliking Bob even then, despite its child-friendly appearance.
Reply  |  Post Message  |  Messages List  |  Start a Board

but that ain't the worst of the worst. the stuff mentioned here is mostly just a pita

the biggest errors are in security or rather the total lack thereof until Aug. 2004 and finally the addition of UAC in Vista

Personally I liked Clippy. Maybe I just needed friends. But hey - you could turn him off.
Reply  |  Post Message  |  Messages List  |  Start a Board

Leave Clippy out of this; Clippy rocked! Ah, I miss Clippy.
Reply  |  Post Message  |  Messages List  |  Start a Board

It's other way around, Microsoft was Nokia's greatest mistake ever. New Nokia phones are technologically superior to any of its rivals but they wont sell as long as they are using windows.
Reply  |  Post Message  |  Messages List  |  Start a Board

Dark Side of AI: How to Make Artificial Intelligence Trustworthy Guest Commentary, Guest Commentary,  9/15/2020
White Papers
2020 Gartner Market Guide for Network Detection & Response
How You Can Evaluate Your Org's Cybersecurity Readiness
Unit 42 Cloud Threat Report: Spring 2020
Forrester: The Rise of the Business-Aligned Security Executive
Focus on the Vulnerabilities that Pose the Greatest Risk