50%
Tweet
Windows 8.1 does a lot more than bring back the Start button. These 10 features may give it a much-needed popularity boost with enterprise users. 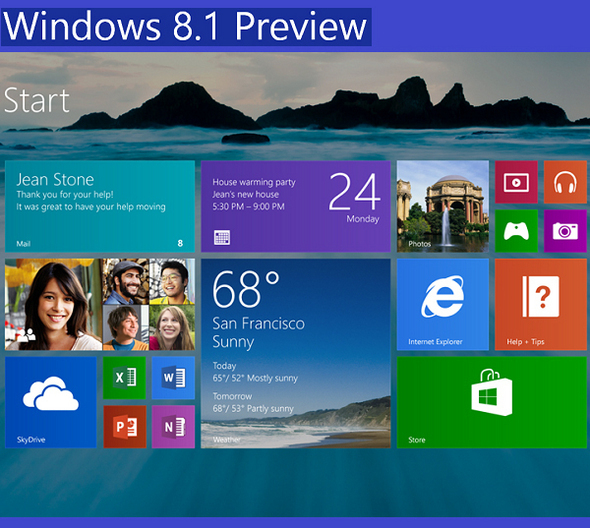 Hey, Windows 8, who loves ya, baby? Not many, it seems. Microsoft claims the new OS is a blockbuster, of course, and has the numbers to (sort of) prove it.

"Now, we've had Windows 8 out for eight months so far. We've been getting lots of feedback. We've sold over 100 million copies, a few more than that, but we'll announce some numbers later this month. We've got over 70,000 apps in the store, and we know we've got hundreds of millions of downloads of those apps. And are we happy with it? Yeah, we're happy with it."

Exhibit B: Antoine Leblond, corporate VP of Windows Program Management, in a May 30 blog post.

"The response to Windows 8 has been substantial -- from new devices to strong app growth to key enhancements to the OS and apps. We've learned from customers on how they are using the product and have received a lot of feedback."

Replace "feedback" with "criticism" in both quotes, and you've got a more accurate take on the state of Windows 8. Adoption has been weak thus far, and studies have shown that consumers aren't thrilled with Windows 8's touch-oriented Modern UI and mobile-style apps.

It's no wonder that Microsoft is working feverishly on Windows 8.1, a soon-to-ship upgrade that addresses many Windows 8 gripes. Most notably, the desktop Start button -- but not the Start menu -- that was cruelly stripped from Windows 8 will be restored in version 8.1, albeit with some changes. And traditionalists who want to bypass the Modern UI entirely will have a boot-to-desktop option.

There's a lot more to Windows 8.1 than a few interface tweaks, however. Microsoft is adding numerous under-the-hood enhancements for its corporate customers, many of whom aren't thrilled with retraining costs associated with a Windows 8.x upgrade.

For Windows 8 and RT users, the Windows 8.1 upgrade will be free when it ships later this year. Microsoft is expected to release a preview version by the end of June.

Click through the slideshow to see 10 lesser-known features that may boost Windows 8.1's popularity, particularly in the enterprise. One unanswered question: How will longtime Windows users -- no doubt the fiercest critics of the Modern UI -- react to Windows 8.1's changes?

What do you think? Let us know in the comments section.

Microsoft company claims that Windows 8.1 is a blockbuster has numerous new features. The Windows 8.1 has been relatively well received. Windows 8 introduced a modern experience for touch-centric, mobile app experiences, With access to the classic desktop as well as a new Start screen.
Reply  |  Post Message  |  Messages List  |  Start a Board

Is it me? I don't see these as benefits. To be fair, my neighbor's children like Win8 because its like their phones and its Facebook friendly. I think Microsoft wanted to help Google by making a competing OS just as bad as Chrome OS, to keep the Justice Department off their backs. I have to connect to the Internet to use Chrome and I need access to my Microsoft account for Win8.
Reply  |  Post Message  |  Messages List  |  Start a Board

There's always Linux. I hear that Chrome works on Linux and that Google Docs and Google Drive works too. Since Microsoft chose to put a tablet OS on the desktop I'm surprised that Google isn't selling Android for the desktop. (No not Chrome OS.)
Reply  |  Post Message  |  Messages List  |  Start a Board

M$'s Win8 Start button will just take you to the Applications pane not the true Win7 application list. The "other" crap makes M$ more money so M$ thinks, expect to continue to see it.
Reply  |  Post Message  |  Messages List  |  Start a Board

Get your fun exciting, easy, logical way for work and play from Apple. Apple got there first so anything simple and easy is a copy right infringement thus the screwed up way from M$.
Reply  |  Post Message  |  Messages List  |  Start a Board

The only reason Win8 has had any traction is because M$ removed Win7 from the channel. Went to Best Buy to get a copy of Win7 and all had been removed. If Win7 was still on the selves Win8 would barely get a million.
Reply  |  Post Message  |  Messages List  |  Start a Board

Let's give Win8 a break for once and pretend you're using it on a touch screen, since it's unusable with the mouse.

I got a touch screen as a novelty. It's always 8" in front of me, so close that I wear reading glasses. That way, I get the effect of a 12' screen a few feet away (which really works, BTW; try it!)

Even though my screen is probably easier for me to reach than for anyone else, I STILL never use touch because it's about 4,096 times easier to slightly move the mouse (that my hand is already on), and click the button (that my finger is already on).

I soon grew physically tired of reaching out to the screen every time I had to click an "OK" button. The only other time I ever stare at my computer screen and move my hand that much is when I watch certain movie clips.

True, and Win7 has the way better desktop. There is zero benefit from Win8 unless one uses touch and touch on a desktop for desktop apps is utterly useless. Leaves the still way too expensive tablets that run a full version of Win8. Folks can get laptops for less money with better performance or tablets for way less money with way more performance and options. There is absolutely no value in Win8.
Reply  |  Post Message  |  Messages List  |  Start a Board
Page 1 / 2   >   >>
Editors' Choice
Hot Topics

More Informa Tech Live Events
Now That Ransomware Has Gone Nuclear, How Can You Avoid Becoming the Next Victim?The Changing Face of Threat IntelligenceDon't Miss this Event Featuring Rob Carter - CIO of FedEx