These free Windows 8 apps will help you and your business bootstrap your way to using Microsoft's new OS productively. 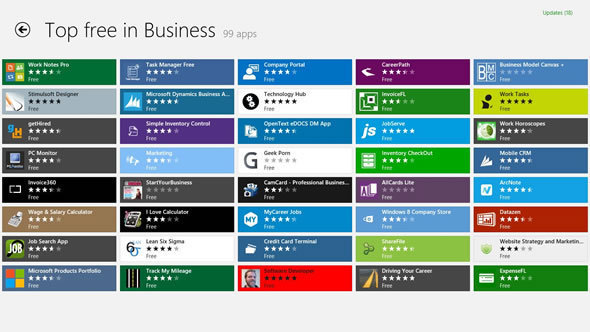 Microsoft recently bragged about the fast growth of its relatively new Windows Store for Windows 8 and Windows RT apps. The store has served up 250 million downloads since launch, according to the company, and 90% of the current catalog is downloaded at least once every month. "Apps momentum has been steady as the number of apps in the Windows Store has increased 6x since launch," said Microsoft chief marketing officer and CFO Tami Reller in a blog post. "Comparatively, that's already passed what iOS had in store, in its first year of app development."

It's safe to say the majority of the growth that Microsoft is touting is driven by free apps. There are more than 70,000 apps in the Windows Store, according to AppCounter; nearly 47,000 of them are free. (AppCounter itself is a free Windows 8 app that tracks Windows Store data.) In a recent two-week period, developers published roughly 450 apps per day.

"Free" sometimes comes with hidden costs. You could end up with unnecessary privacy or security risks. Overly intrusive adware is another concern with free downloads. You probably shouldn't bank on high levels of support and service from free apps. And if you get a little too app-happy because of the $0.00 price tag, you could end up with a cluttered device full of stuff you never use.

Note, too, that there are "free" apps that won't do you much good unless you have a paid account with the underlying platform. Citrix's ShareFile was quick to roll out a Windows 8 app, for instance, but if you're not a ShareFile user you won't get very far with the app.

Similarly, there are plenty of compelling "free" Windows 8 apps that are really just free trials for paid software, a distinction that's often glossed over. A website monitoring tool such as Appfail could be a good fit for Windows 8 users, but the "free" app in the store is a 30-day trial.

From a budget standpoint, though, genuinely free apps are tough to argue with. If you account for the potential downsides, it's okay to act on the temptation. I bought some Windows 8 apps while reviewing Lenovo's ThinkPad X1 Carbon Touch Ultrabook, but I downloaded more free apps, because -- well, they're free.

For this review I went in search of free apps that I could either use myself or see as potential fits in corporate contexts, especially for small businesses and individuals procuring their own apps. Although free often feels easy -- it's just a click, after all -- I did run into the occasional headache in addition to the ones already mentioned.

A prime example: Apps for services I already used seemed like no-brainers, but in some instances I struggled to find a good reason to use the Windows 8 app instead of the desktop or Web interface. Exhibit A: Dropbox. Like many others, I use it regularly, usually in folder mode on my old Windows 7 laptop or via a native smartphone app. I've got no issues with the Windows 8 app -- I just found myself not needing it all that much, so you won't see it here. (This could be partly a function of my hardware; although the X1 Carbon is equipped with a touchscreen, it bears much more in common with a traditional laptop than a tablet or smartphone.)

I did include Microsoft's own SkyDrive service. I'm more likely to use this app in folder mode, too, but I like the Windows 8 app's design. I'm also a fan of SkyDrive's default integration in Office 2013.

The general goal here was to keep the list manageable, and eight's a fitting number when discussing Windows 8. Are these the only useful free apps? Of course not. Tell us about your own favorites -- or rejects, for that matter -- in the comments section below.

For productivity you can try Linpus Gesture2Launch. It makes launching applications and actions like Restart quicker and easier through touch gestures.

The most popular Windows 8 apps of all, by an order-of-magnitude, are the ones that get rid of Windows 8 so that it looks more like Windows 7. Sad.
Reply  |  Post Message  |  Messages List  |  Start a Board