In this mini-tour of Windows 8, the second in a two-part series, we look at hot corners and the OS's new bundled apps, including Finance, Mail, Maps, People, Photos, and Weather.

The Windows 8 operating system is a big switch in look and tools for users. In our first mini-tour of features we looked at the new login, lock, and Start screens. In this second of our mini-tours we'll be delving more deeply into the new Metro user interface and some of the OS's key bundled Metro apps, a.k.a. Windows Live Essentials.

The OS, although very stable and quite likely able to handle its own in a production desktop setting, isn't complete, and there are issues still left to resolve. For instance, not every app ran for me on my Asus Eee PC T101MT netbook. Once released, however, I would expect them to run on any Windows 8-capable PC.

As part of Windows 8's touch-centric motif, Microsoft has replaced the familiar Start button with a "hot corner." All four corners of the screen provide some level of new functionality when you hover the cursor over them. The only annoyance: you really have to bury the cursor in the corner to make menus display. 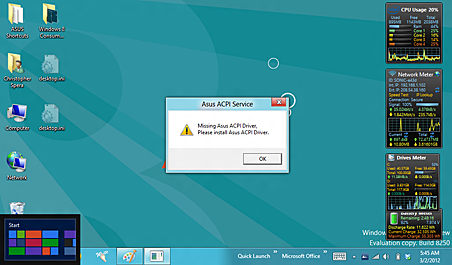 Windows 8's new task switcher is for Metro apps only. Moving the cursor to the upper left corner makes the most recent app appear. Sliding the cursor down the left edge reveals other Metro apps that are currently running. Legacy as well as Metro apps can still be switched to with an ALT-Tab key press, however, so you don't lose the ability to switch through running legacy applications.

Like their smartphone equivalents, Metro Apps never leave memory. They stay resident (or leave behind a stub) and reactivate as needed when called upon. If too much time has passed, they will auto-quit on their own. Pressing Alt-F4 also closes Metro apps. 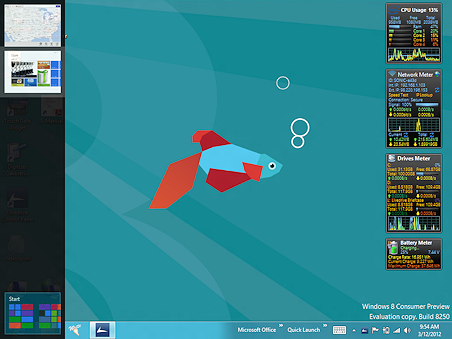 When you're not in the Start menu and would like to see your computer's settings, you can hover the cursor in the top right corner of the screen. This brings up Windows 8's universal toolbar, a.k.a. charms, including the Search, Share, Start, Devices, and Settings options. They first appear as a transparent bar; slide the cursor down to fully activate the bar, then click on an option to launch it. 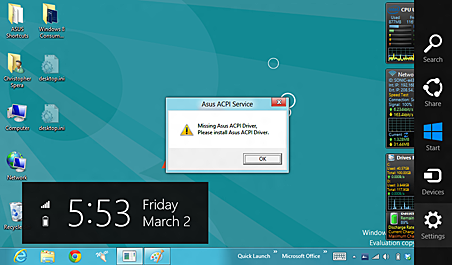