Windows 8 Consumer Preview offers a lot, but is it for you and your legacy PC? Chris Spera reviews.

I am declaring 2012 The Year Of The OS Update. Apple is on track to deliver Mountain Lion OS X 10.8 to its Mac users by early fall, and Microsoft should have Windows 8 out by the end of the year.

Microsoft released a "consumer preview"--what everyone else calls a beta--of Windows 8 on Feb. 29. Although Microsoft's technical testing team (those that have specifically been invited by Redmond to be part of Microsoft's formal, external testing and release cycle) will likely have access to more frequent releases and updates, this will likely be the last release that is made available to the general public before the software is released to manufacturing and made available for purchase at retail. Users of the Windows 8 Consumer Preview should be able to use the software until January 2013.

Tablets, smartphones, mobility: These are the devices Microsoft is attempting to address with the latest version of its flagship operating system. With the release of Windows 8, Microsoft is clearly taking aim at Apple and its iPad and Google and its tablet manufacturers. The big question is: has it made the impact it was hoping for, and will Windows 8 draw people away from iOS and Android and put Microsoft back on top? 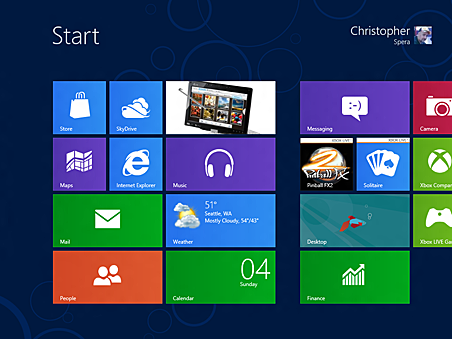 Touch-centric operating system
Few people using Windows 7 will be tempted to upgrade to Windows 8. The reason? Windows 8 is clearly targeted at tablets and touch-enabled PCs. It will be sold mainly on new tablets, new touch-enabled PCs, or new conventional laptops or desktop PCs.

After using Windows 8 for several days, it became clear that it's not meant for a traditional desktop or laptop computers. It's touch-centric--you can use a mouse and a keyboard, but the Metro user interface is really made for touch.

For example, Windows 8 replaces the Start button and Start Panel with Windows 8 hot corners, Charms, and Live Tiles. Moving your mouse to the lower-left hot corner and clicking will bring up the new Metro Start Menu and its Live Tiles--but it's easier to do this with your finger or a stylus than with a mouse. It's just easier to move horizontally through the Start Menu and Live Tiles with a finger slide or a flick than with a mouse click and drag. Without touch, Windows 8 is functional--but frustrating.

Microsoft has made the download of this new beta-class operating system available in both executable and ISO forms, the latter for those that would like to have the software on a bootable DVD. Those that choose the ISO route will initially need to have an extra 2.5GB of bandwidth available to them.

Microsoft's severs have been pretty busy lately, and at first I had a lot of trouble grabbing the software. But patience and regular (not mobile) broadband won out, and I was able to successfully download the software late one night. I chose the 5MB executable installation. After installing the install stub, the server downloaded the complete installation of Windows 8 and placed it in my C:\ drive in a folder called WindowsESD.

I installed Windows 8 Consumer Preview on an Asus Eee PC T101MT netbook, which doubles as a traditional tablet PC with swivel screen. Below are the specs.

The netbook came with 1GB of RAM, which I upgraded to 2GB using an extra RAM stick I had lying around. I doubled my memory for free. But RAM is the only easy upgrade available. I had intended to swap out the hard drive for a 128GB SSD, but as with most netbooks, you literally have to take apart the entire machine to get to the hard drive. I didn't want to break anything so I passed on that upgrade.

My netbook's default resolution is 1024 x 600 but can also display 1024 x 768. That was good, because the display is crucial. Windows 8 will function at resolutions below 1024x768, but Metro apps need 1024 x 768 to run. When I couldn't get my netbook to use 1024 X 768 with the Windows 8 upgrade, I thought it was a driver-related problem and went back to the device's download page, pulled down the Windows 7 drivers, and reinstalled them in Windows 8. No luck.

Turns out BYTE's Todd Ogasawara had had a similar issue with his Asus Eee PC T91MT, an earlier version of the same Asus netbook. Unfortunately, that didn't work for me, either.

I finally decided to search on "forcing 1024x768 resolution on a netbook" and bumped into an article for Windows 7 that was said to have some success with Windows 8. Thankfully, the registry modifications that were described in the article worked for me, too, with one caveat--that's the only resolution available (the resolution dropdown in the Display Control Panel applet is unselectable). Getting all this to work right took most of a day.