When one of the top execs of VMware starts singing "Let It Go" everyone pays attention. That is what Sanjay Poonen, VMware VP for end-user computing, did during his presentation at VMWorld Europe 2015 for the few BlackBerry users in the audience.

When one of the top execs of VMware starts singing "Let It Go" (from the movie Frozen) everyone pays attention. That is what Sanjay Poonen, VMware VP for End User Computing, did during his presentation at VMWorld Europe 2015 for the few BlackBerry users in the audience.

Poonen was addressing more than 10,000 VMWorld Europe attendees last month at Fira de Barcelona, when he asked the audience how many of them still used a BlackBerry smartphone. He saw two hands go up. Then he said, "I've got two words for you. In the words of my daughter's great movie 'Frozen': Let it go! Or if you want me to sing it …"

Poonen also reinforced the concept that mobile is the new desktop, and announced VMware's acquisition of Boxer. He described Boxer as a company that has developed "a mature Personal Information Management solution for enterprises that offers a container approach to mobile application management and security."

According to the VMware blog, "The combination of Boxer and AirWatch by VMware will create a world-class suite of services that will enable businesses to provide their employees with secure access to their email, content and apps." 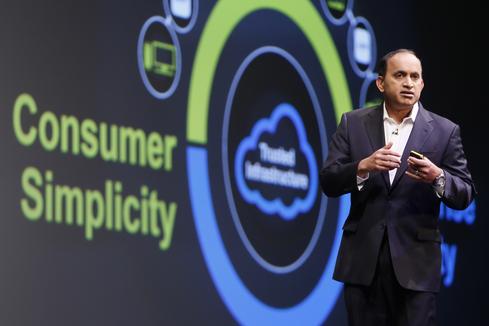 Why is it important for VMware to "kill" BlackBerry? Probably for two reasons:

BlackBerry is now focusing its efforts on MDM and services, rather than handsets. Although it recently announced the introduction the BlackBerry Priv, its smartphone business is basically gone. With the Good Technologies acquisition, BlackBerry has an opportunity to challenge AirWatch in its core market. Previously, BlackBerry was only able to support a few platforms with its BlackBerry Enterprise Server (BES) system.

While the combination of BlackBerry BES and Good Technologies could create serious competition for AirWatch, VMware is still clearly the leader in MDM.

Another possible disruption of the market is the Dell-EMC deal. It is difficult to know how Dell (which after the deal is completed will own about 80% of VMware) will incorporate the AirWatch product portfolio in its offerings. VMware's CEO stated that it would remain public and independent.

Time will tell. But the message from VMware is clear: Let BlackBerry go!

Pablo Valerio has been in the IT industry for 25+ years, mostly working for American companies in Europe. Over the years he has developed channels, established operations, and served as European general manager for several companies. While primarily based in Spain, he has ... View Full Bio
We welcome your comments on this topic on our social media channels, or [contact us directly] with questions about the site.
Comment  |
Email This  |
Print  |
RSS
More Insights
Webcasts
Unifying Your Endpoint Security Strategy
An Enterprise Guide to Web Security
More Webcasts
White Papers
Gorilla Guide Extended Detection and Response
Proven Success Factors for Endpoint Security
More White Papers
Reports
Forrester Total Economic Impact Study: Team Cymru Pure Signal Recon
SANS Institute Survey: The State of Cloud Security
More Reports