IT Pros Get Meager Raises As Median Pay Hits $80,000, Our Survey Finds - InformationWeek 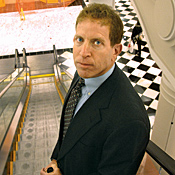 Beller's courting retailers, now as a consultant
Photo by Sacha Lecca
It's long been true that there isn't one monolithic IT job market, but this recession is causing more fragmentation than usual, our annual U.S. IT Salary Survey shows. Skills have always separated the highest paid from the lowest. This year, salaries and raises reveal sharper shifts based on the industries and regions in which IT pros work.

Around Detroit, Los Angeles, and New York, the typical IT staffer didn't get any raise, while in Washington the median increase was a solid 2.9%. In investment banking, the typical IT manager in our survey makes $12,000 less this year, as bonuses shrink. In biotech, IT pay is growing.

Such disparities are among the most dramatic findings of our survey, which is based on responses from 12,410 IT professionals in the United States. Across the country, IT staffers report a median increase in total compensation--salary and cash bonuses--of just 0.7%, with IT managers receiving a 1.6% increase. Last year, raises were almost 3% and 4%, respectively. Median compensation reported by IT staffers is $80,000; for IT managers, it's $105,000.

IT pros are less secure about their jobs--understandably, with IT unemployment at its highest level since 2004. Thirteen percent of IT managers characterize their jobs as "insecure," compared with only 8% last year. Only 37% consider their positions to be very secure, compared with more than half last year.

Those struggling to find work can relate to Mike Beller, who was CIO at clothing retailer Steve & Barry's until the once fast-growing chain went out of business in January, eliminating about 130 IT jobs. Beller wants to stay around New York City for family reasons, and he was six interviews into landing a job--a new position that an apparel company was creating to combine the CIO and COO roles. Then the company abruptly halted all hiring, including the new executive role. "The company froze with indecision, not knowing what's happening in the market and where the economy is going," Beller says.

Beller's next move is typical of how paramount industry knowledge has become in addition to IT skills. With the job market stalled, Beller and other retail executives started a consulting business, Lightship Partners, that focuses on quick-return projects such as analyzing data to help retailers improve merchandising or finding savings through business process outsourcing (see story, "How Retailer Steve & Barry's Failure Rippled Through IT Careers").

DIG DEEPER
Free In-Depth Salary Survey Report Online
Our downloadable report delves deeper into IT salaries and careers, including 54 charts exploring salaries by skill and title; benefits and perks; and IT professionals' attitudes about their jobs, outsourcing, and more.
Download this free
InformationWeek Analytics Report
See all our InformationWeek
Analytics Reports
It might not feel like it to Beller and others out of work or worried about their jobs, but the reality is that, even with stingy raises and rising unemployment, things could be worse. Just ask someone in another profession. "There's no absolute safe place, but IT is a good place to be--perhaps the best place to be right now," says David Van De Voort, a principal at human resources consulting firm Mercer.

Strong tech skills still can pull a good paycheck. The top-paying staff functions include data mining, integration, security, ERP, and Web infrastructure, all of which have median compensation of more than $90,000. By title, IT architects top the list again this year, the only staff job with median pay above $100,000.

Experts can say IT is a safer profession than most, but the economy is again testing IT pros' faith in this career path. A year ago, fewer than half of respondents to our survey described the IT career path as less promising than it was five years ago. Today, 60% of staff and 56% of managers take that dim view. Even so, about nine out of 10 regard their own career paths as being as secure or more secure than most other professions.

In the last recession, many tech pros were forced to retrain away from programming and support tasks to ones tied more closely to business functions and industry knowledge. That approach presents its own challenges in this downturn, as people feel more tightly tied to industries that are getting clobbered. IT pros are again having to prove their resilience.