Yahoo this week became the latest company to disclose workplace diversity stats, and its numbers reflect a troubling issue: Yahoo, like other Silicon Valley tech companies, has a diversity problem.

About 37% of Yahoo's 12,000 global workers are women, Yahoo said in a blog post, and just 23% of leadership -- defined as vice presidents and above -- are women. Yahoo did not provide commentary on its breakdowns, saying only that it is committed to attracting, developing, and retaining a diverse workforce.

"We're in the business of building products for hundreds of millions of users worldwide and that starts with having the best possible talent -- a Yahoo team that understands and reflects our diverse user base," said Jackie Reses, Yahoo's chief development officer. "These statistics are only part of the story -- Yahoo works to ensure that our existing employees feel welcome and supported during their time at the company." 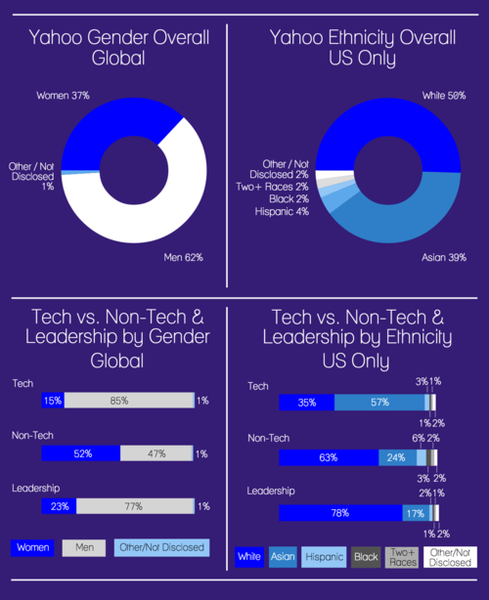 In addition to the male-female breakdown, Yahoo provided data on the ethnicity of its workforce. Globally, 50% of Yahoo's workers are white, 39% are Asian, with the remainder identifying as Hispanic (4%), Black (2%), mixed race (2%), and other (2%).

Diversity at Google
Yahoo's workplace diversity disclosure followed ones from Google and LinkedIn in the last several weeks. Google was the first company to release statistics, acknowledging in a blog post that it was not pleased with its progress.

"We've always been reluctant to publish numbers about the diversity of our workforce at Google. We now realize we were wrong, and that it's time to be candid about the issues," said Laszlo Bock, Google's SVP of people operations. "Put simply, Google is not where we want to be when it comes to diversity, and it's hard to address these kinds of challenges if you're not prepared to discuss them openly, and with the facts." 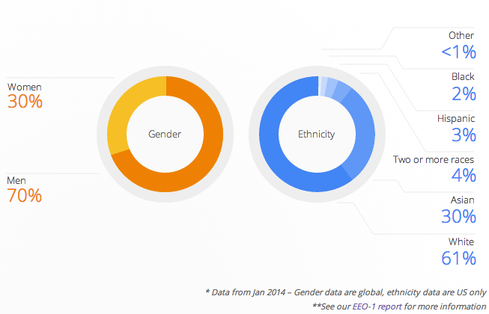 Seventy percent of all Google workers are male, the company said. Looking specifically at the tech roles at Google, women represent just 17% of the workforce. Leadership roles at Google tell the same tale: 21% are held by women while 79% are held by men.

Google said that one reason for its skewed diversity statistics is because there are fewer women and minorities pursuing computer science degrees.

"For example, women earn roughly 18% of all computer science degrees in the United States. Blacks and Hispanics each make up under 10% of US college grads and each collect fewer than 10% of degrees in CS majors," Bock said. "But we're first to admit that Google is miles from where we want to be -- and that being totally clear about the extent of the problem is a really important part of the solution."

Diversity at LinkedIn
Last week, LinkedIn released details about its workforce diversity, acknowledging that it, too, has work to do. 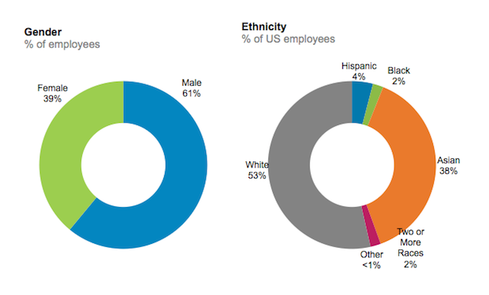 LinkedIn's head of talent, Pat Wadors, said while LinkedIn has grown over the past few years to become a global company, it needs to improve overall diversity.

"True inclusion is something that can only be achieved through a workforce that reflects the rich diversity of our member base, and this is something we strive to do in all of our hiring efforts," she said. "While it's easy for tech companies to form partnerships with organizations that can promote a more balanced workplace diversity, there is a cycle of responsibility associated with transparency."

The companies themselves are saying they want to create a more diverse workforce. We are reporting that issue, so let's discuss this in a balanced way. Smart IT leaders will tell you a diverse group -- ages, backgrounds, gender, etc. -- benefits a company. The last thing you want is to be listening to people who are just like you, all the time. I have heard this from IT leaders of many ages, genders, and ethnicities, throughout the years. But the advice goes far beyond IT.
Reply  |  Post Message  |  Messages List  |  Start a Board
InformationWeek Is Getting an Upgrade!