Microsoft employs more women and minorities than ever, but other large tech companies still have more women in senior positions.

Women now make up 29% of Microsoft's worldwide workforce, up from 24% last year, according to new data the company recently released. The increase puts Microsoft roughly on par with other large technology companies, many of which have recently released employee demographics data in response to concerns over workforce diversity.

In an email to employees, Microsoft executive vice president of human resources Lisa Brummel said diversity "is not a finite goal that can be simply achieved, then 'checked off' a list." She said she was proud of Microsoft's progress, but "much work remains to be done."

The stats reflect Brummel's caution that diversity efforts are still works in progress. Though Microsoft is employing more women than ever before, female employees aren't making equal gains across the company. Among Microsoft's tech workers, women comprise only 17.1% of the workforce. Similarly, women fill only 17.3% of Microsoft's leadership roles. The stats reflect Microsoft's employee demographics as of Sept. 30 and include employees absorbed in its acquisition of Nokia's device business.

In her email, Brummel said Microsoft is just beginning to share its diversity plans with the public. In the coming weeks, the company will share more information about new and ongoing efforts to "advance diversity and inclusion at Microsoft and in the tech industry."

In addition to gender breakdowns, Microsoft released its workforce's racial demographics. Just over three-fifths of employees are white, and nearly 30% are Asian. Hispanic and Latino employees comprise 5.1% of the company's workforce, followed by African-American and African black employees at 3.5%, multi-racial employees at 1.2%, American Indians and Alaskan Native employees at 0.5%, and Native Hawaiian and Pacific Islander employees at 0.3%. 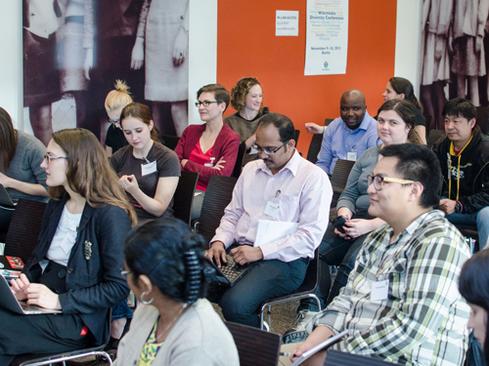 Within tech positions, Asian employees account for 35.3% of Microsoft workers. All other racial groups account for smaller shares relative to the companywide numbers. Among nontech employees, 44.5% are women. Nearly 70% of nontech employees are white, but compared to the rest of the company, these employees include higher percentages of Hispanics and blacks -- 7.9% and 6.2%, respectively. Caucasians hold more than 70% of Microsoft's leadership positions.

Noting the relatively low numbers of minority and female workers at top tech companies, many outsiders have called on these companies to re-examine their diversity programs. Microsoft has released demographics data for several years, but as the issue has gained more mainstream attention in recent years, other large tech companies have begun to share their employee breakdowns.

Microsoft is roughly on par with industry peers such as Google, Apple, and Facebook. Based on each company's most recent demographics disclosures, Facebook's workforce has the highest percentage of female workers, at 31%. But Apple has the highest percentage of women working in technical positions, with 20%. Women also hold a higher percentage of senior and leadership roles at Apple -- 28%. Women make up 30% of Google's employees and 17% of its tech workers, roughly the same demographics as Microsoft. But Google's female employees hold a greater percentage of leadership roles, with 21% compared with Microsoft's 17.3%.

Michael Endler joined InformationWeek as an associate editor in 2012. He previously worked in talent representation in the entertainment industry, as a freelance copywriter and photojournalist, and as a teacher. Michael earned a BA in English from Stanford University in 2005 ... View Full Bio
We welcome your comments on this topic on our social media channels, or [contact us directly] with questions about the site.
Comment  |
Email This  |
Print  |
RSS
More Insights
Webcasts
Take DevOps to the Next Level
Using MS Teams as Your Phone System - FREE Event 4/14
More Webcasts
White Papers
2020 SANS Enterprise Cloud Incident Response Survey
The Top 5 Mistakes Everyone is Making in Vulnerability Remediation
More White Papers
Reports
The State of CCPA 2021
Trustwave Global Security Report
More Reports