PayPal's Path To Independence: A Tale Of Cloud Innovation - InformationWeek

PayPal navigated its separation and independence from eBay in a seven-month accelerated transition. On the big day, all systems were go. Learn how the creative use of cloud technologies, and a remarkable degree of employee collaboration, earned the company a 2016 Elite 100 Award in the category of Best Use Of Cloud Services.

By the best-informed estimates, it would be a two-year task: Separate all PayPal and eBay information processing systems as the two firms consciously uncoupled after 10 years together. And the IT employees of both companies would have seven months to do it.

EBay announced on Sept. 30, 2014, that PayPal would be spun out as its own public company on July 17, 2015. "Everything had to be separated in a legally defensible way," said CTO Sri Shivananda in an interview with InformationWeek. The two companies, which generated $17.9 billion in combined revenues in 2014, had to cease any form of joint operations, he noted.

At the same time, PayPal was developing its One Touch payment system, which would allow a consumer to go from site to site on the Web without needing to repeatedly fill in his or her billing information. The cross-device system needed to go live in mid-2015, coinciding with the cutover to independent operations.

One thing was in the companies' favor: They had established an OpenStack private cloud with a heavily virtualized VMware environment. PayPal's development and operations were occurring in a single cloud environment.

It wouldn't be easy, but PayPal built a new OpenStack infrastructure, then copied business systems and migrated them to its own machines. "Clone and go" became the watchword, said Shivananda.

The target deadline for the cutover was set at June 15, and the actual deadline was pushed up to June 1 to give the two companies a window in which to troubleshoot any problems that might arise.

No large separation staff was hired. Instead, an 800-employee separation team was formed within the company consisting of some 600 IT staff -- the remaining number hailing from various segments of the business. The team members were responsible for preparing for the move while continuing in their day-to-day roles. Up front, everyone agreed there must be no compromise of security, no interruption of the business, and no discernible change imposed on the 173 million-member customer base.

"I've been in this business for 20 years," said Shivananda, who also serves as PayPal's senior VP of corporate platform. "This was the most intensive project I have ever had to participate in and execute."

Did he panic? No. "Was I nervous? Absolutely."

Kirsten Wolberg, former CIO of Salesforce, had been with PayPal for two years as VP for technology before being named as the executive to head up the overall separation. In an interview with InformationWeek, Wolberg said splitting PayPal from eBay was described as a "divorce" in the external world. Inside the company, though, the view was more positive. PayPal and eBay thought of themselves as siblings "who were successful enough that we each could go off on our own," she said.

Wolberg said the team did much more than execute a move to independence. In the process, it had adopted agile programming methods and cloud computing to allow rapid changes to its business. The world of payments systems began to change in the 2012-2013 time frame. Agile and the disciplines that go with it proved highly useful when a number of migration changes, such as the interface redeployment, were necessary.

Everything had to be disentangled to such an extent that the IT staff of one unit couldn't physically access the equipment of the other. Considering that in 2014 the companies shared a corporate network and occupied four data centers together, this was no mean feat. PayPal took over one large and one small data center, both holding the servers for what would become its C3 cloud, while eBay inherited a third. Both companies continued to occupy the fourth, a colocation site where they maintained separate equipment. 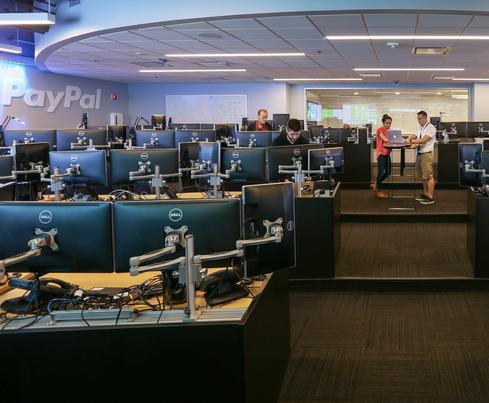 PayPal CIO Brad Strock was a key leader in the transition, and supervised the migration of 9,000 servers, which were either physically or virtually moved, while another 5,000 new servers were added to the mix. Another 30,000 end-user devices -- computers and phones -- needed to be migrated as well.

There were various trouble spots along the way in which a PayPal team member could have complained about efforts from counterparts at eBay, or vice versa. But to a surprising degree, such friction was almost nonexistent. "There was unbelievable cooperation across the company," said Wolberg. Top management understood there would be bumps in the process, and authorized the separation team to work through them as quickly as possible.

Get It Right the First Time

"The greatest obstacle was the time frame," Wolberg added. There was "no slack" in the schedule, she said, no going back to do things a second time. The teams were going to have to get it right on the first try.

As planning ended and the process got underway, Wolberg discovered, "We didn't know what we didn't know." When it came to applications, "much of the technology was not documented. We would find things out, like places in the code base where we would share data," which would not be allowed for an independent public company. All in all, the transition team discovered 350 spots where a data-sharing interface existed, all of which had to be redone.

PayPal's previous adoption of agile programming methods was a boon to the process. It allowed the establishment of clear goals and the accomplishment of a set of them in two-week sprints, with a high degree of visibility.

EBay happened to possess one of the largest data warehouses in existence. PayPal ended up with its own 1.1 petabyte data warehouse on a 74-node cluster. It was a challenge, said Shivananda, "to get it loaded and synched without disrupting any business processes."

Part of the "clone and go" approach was intended to keep the team from getting bogged down in major changes, but the security staff said it saw places where it could make improvements. Wolberg and Shivananda gave the go-ahead. Despite the looming "going public" deadline, the security staff installed improved monitoring and protective systems. "We did a ton of upgrades in security," said Shivananda. "We stayed smart about the opportunities." 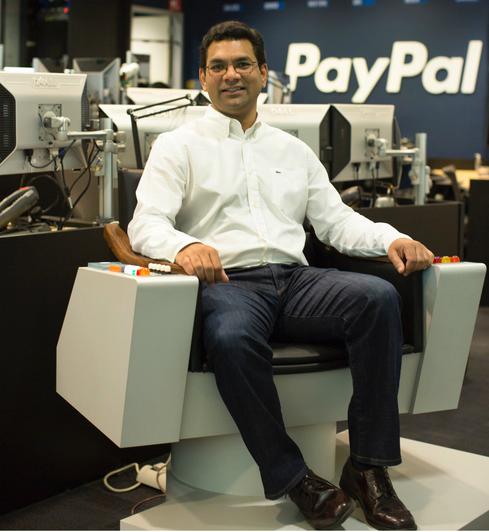 PayPal CTO Sri Shivananda may look like he's sitting on the bridge of the USS Enterprise, but it is, in fact, the company's C3 Cloud command center.

PayPal email switched from Exchange Servers in-house to email via Office 365 in the Microsoft Azure cloud. Soon, use of Office 365 expanded beyond email to other desktop applications, although on-premises Office remains a staple of PayPal's day-to-day business.

As June 15 rolled around for the separation to go live, the changeover was "seamless," said Wolberg, with different observers throughout the company repeatedly reporting that systems were functioning smoothly.

Another positive outcome: Wolberg has moved from VP Technology and chief separation executive into the role of VP of talent in order to implement a transformation in how PayPal hires, trains, and retains employees. That's partially a lesson learned in the spin-out transition: "We could clone our technology, but we couldn't clone our people," said Wolberg. "When you already have the muscle, you can use it."

Charles Babcock is an editor-at-large for InformationWeek and author of Management Strategies for the Cloud Revolution, a McGraw-Hill book. He is the former editor-in-chief of Digital News, former software editor of Computerworld and former technology editor of Interactive ... View Full Bio
We welcome your comments on this topic on our social media channels, or [contact us directly] with questions about the site.
Comment  |
Email This  |
Print  |
RSS
More Insights
Webcasts
Building Asset Management into Your Enterprise Security Strategy
Managing a Hybrid Cloud Infrastructure
More Webcasts
White Papers
Simplify Your Application Security
ITSM for the Enterprise - What Makes it Work?
More White Papers
Reports
Immuta Data Engineering Survey: 2021 Impact Report
Assessing Cybersecurity Risk in Todays Enterprises
More Reports