MIT's Andrew McAfee looks at all those things we said computers could never do, but they did. And, he warns of the HiPPO.

You and your peers in the tech field might be a little surprised and more than a bit overwhelmed by the speed with which machine intelligence is outperforming humans. Don't feel bad, even the experts who write the books are feeling stunned by the rate and scale of tech change.

Andrew McAfee, principal research scientist at MIT and author of four books on smart machines, told an Interop ITX audience today that he keeps getting it wrong in predicting how quickly machine learning is advancing. Plus, he doesn't feel so bad either, because so many other experts who write books have been just as wrong.

"We're still underestimating how big the change is," he told about 1,000 attendees during an Interop ITX keynote address.

McAfee highlighted the pace of change by tracing through four primary examples of where machines unexpectedly have outperformed humans in recent years: Wine, data center management, poker, and a 3,000 year old game.

His keynote was titled Machine, Platform, Crowd: Harnessing the Digital Revolution, which is the same title of his new book, coming in June, which he co-authored with Erik Brynjolfsson, director of the MIT Center for Digital Business.

Wine: Algorithms are giving human wine tasters a run for their grapes in rating the long-term value young wines based on factors such as rainfall and temperature in their harvest years.

Energy: Google DeepMind's AlphaGo manages the energy use in a Google data center. The machine returned dramatically better energy use results, averaging a 15% improvement in energy use.

That 3,000 year old game: As recently as 2014 experts predicted that computers would never be able to beat human masters in the strategy game Go. Those experts were proven wrong when AlphaGo beat the best in the world as soon as 2015.

"It keeps feeling to me that we are in very, very new territory," said McAfee. He discussed what could go wrong as machines become smarter, and concluded that the greatest problem is with HiPPOs. Not the bulbous beasts but relying on the "Highest Paid Person's Opinion." That would be the boss of the highly experienced professional who takes in data from a geek and says that he or she will consider the data and also consider their personal experience and gut feel before "pronouncing" what the company should do.

They are "chronically second guessing the geek," McAfee said.

Using "geek" in a complimentary way, he said "geeky leadership" can disrupt industries, pursuing bold mission statements and taking on challenges such as disrupting the auto industry and targeting a trip to Mars. He said geeky leaders are bold, rational, iterative, transparent, and experimental (testing their hypothoses and data using scientific method).

In an interview after his presentation, McAfee said he and Brynjolfsson set the theme for their upcoming book based on the feedback on their 2014 book The Second Machine Age: Work, Progress, and Prosperity in a Time of Brilliant Technologies. 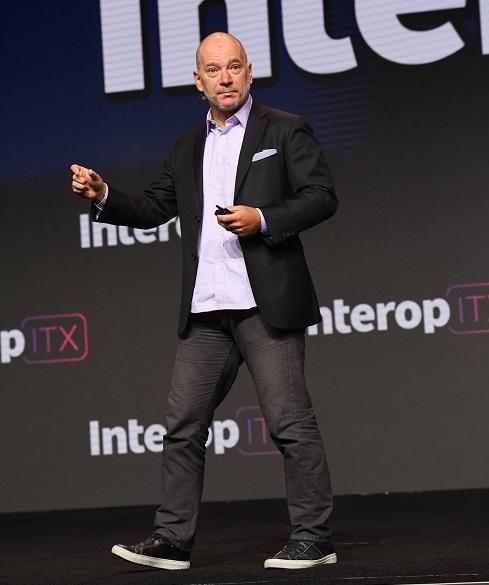 "As soon as we wrote that last book people who run companies of all sizes and types came up to us and asked, 'What does this mean for my company, and how I run it?' "

He discussed how much has changed in those three years, how drones have become a "big deal," how the platform economy has emerged, and how machine learning has accelerated as more proof points combined with technology advances have encouraged more companies to venture into machine learning initiatives.

The upcoming book is intended to help companies understand how the evolving machine/human relationship means new approaches to running a company and providing products and services to customers.

He called on companies to experiment with advanced technology concepts. "If an organization isn't ramping up the successful experiments they aren't doing their job," he said.

Jim Connolly is a versatile and experienced technology journalist who has reported on IT trends for more than two decades. As editorial director of InformationWeek and Network Computing, he oversees the day-to-day planning and editing on the site. Most recently he was editor ... View Full Bio
We welcome your comments on this topic on our social media channels, or [contact us directly] with questions about the site.
Comment  |
Email This  |
Print  |
RSS
More Insights
Webcasts
Building Asset Management into Your Enterprise Security Strategy
SASE: The Right Framework for Today's Distributed Enterprises
More Webcasts
White Papers
Zero Trust Evaluation Guide
2021 Application Security Statistics Report Vol.1
More White Papers
Reports
Gartner Market Guide for Insider Risk Management Solutions
How Data Breaches Affect the Enterprise (2020)
More Reports
Copyright © 2021 UBM Electronics, A UBM company, All rights reserved. Privacy Policy | Terms of Service