First-generation 802.11ac -- Wave 1 -- access points and devices are already in the field providing up to 1.3 Gbps speeds to devices. Wave 2 access points will deliver up to 2.34 Gbps speeds and they'll do something even more important for network administrators: They'll deliver those speeds to more than one device at a time.

Wave 1 access points are only able to connect at highest speed to one client at a time. SU-MIMO (Single-user Multiple Input/Multiple Output) uses multiple channels and frequencies at once in order to gain throughput speeds greater than that allowed over any single channel -- but to only one attached device at a time.

All the other devices connected to the access point will do so at reduced speeds comparable to 802.11n (433 Mbps or less). Wave 2 allows multiple clients to attach at the highest speeds through MU-MIMO (Multi-user MIMO) though the number of high-speed clients at any one time isn't infinite. Even so, network administrators at colleges and universities are beginning to plan for the expansion. 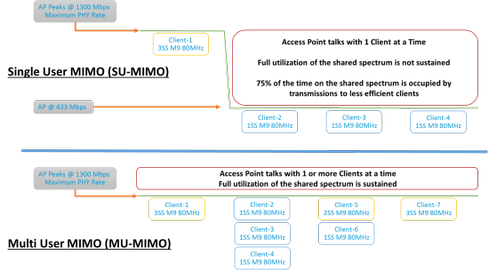 HCC serves about 115,000 students each year and has about 6,500 faculty and staff scattered across the Houston area in 26 campuses. In an interview with InformationWeek, he talked about why HCC is planning a Wave 2 deployment.

"Wireless is still reaching the catalyst moment where the promises that Wave 2 can bring will make the Achilles' heels of wireless less an issue," Cooper said. "In peak time the common areas and high-density areas receive so much traffic that the multi-user MIMO of Wave 2 lets us not over-provision the common areas quite so much."

As in so many organizations, one type of data is driving much of the demand for greater bandwidth at HCC. "In the classroom environment, the faculty has the need for more pervasive video use. This opens up the possibility to do more video interaction between student and faculty," Cooper said.

Renee Patton, Director of Education at Cisco, spoke with InformationWeek and said that Houston Community College's experience is not unique.

"Video is the big driver for bandwidth. When we talk to customers they're astounded by the video streams coming over their networks," Patton said during a telephone interview. "We're talking about lectures on the Web, but Netflix and gaming devices are driving huge bandwidth as well," Patton explained, saying, "They're often surprised because they plan on the educational stuff, but they're seeing students with their own requirements as well. They want the quality to be at least as good as what they're bringing from home."

One of the points made by both Cooper and Patton is that the number of attached devices, and the demand each places on the network, has grown much faster than the number of people in the user population.

"Students can be bringing seven or more devices from home and trying to connect each of them to the network. The sheer demand on the network can be huge," Patton said.

Cooper agreed with that analysis, adding, "When you talk about a collaborative classroom environment and you have 30 to 40 people in the classroom, all of them trying to stream video, it has a huge impact on the bandwidth to the room."

The advances in wireless networking do have implications for the rest of the networking infrastructure.

"We're standardizing so every AP location has two CAT6a cable drops," Cooper said. "We're planning on every Wave 2 AP needing 10 gig interconnects." Those cables will be carrying both data and power to many devices -- electrical power at a higher wattage than many other PoE devices and 10 Gigabits per second of data at distances of up to 100 meters. Patton acknowledged that, saying, "Wave 2 does have increased power requirements, but we're dealing with that and it can use the same cables."

Education is far from the only market to be waiting for Wave 2 082.11ac.

It is, however, the market that may sit most precisely at the intersection of high user density and consistent quality requirements. Kyle Cooper succinctly explained why it's important for network architects like him to get that intersection right. "We really need to get to a place where students and staff can use the network as a tool without it becoming an obstacle."

Curtis Franklin Jr. is Senior Editor at Dark Reading. In this role he focuses on product and technology coverage for the publication. In addition he works on audio and video programming for Dark Reading and contributes to activities at Interop ITX, Black Hat, INsecurity, and ... View Full Bio
We welcome your comments on this topic on our social media channels, or [contact us directly] with questions about the site.
Comment  |
Email This  |
Print  |
RSS
More Insights
Webcasts
Zero Trust for a Work-From Home World
Cybersecurity's Next Wave: What You Should Know
More Webcasts
White Papers
Why Add Security to Your Skill Set and How to Do It
Sunburst: Impact and Timeline
More White Papers
Reports
Accelerate Threat Resolutions with DNS
Key Strategies for Managing New Risks in Cybersecurity
More Reports

He's not referrng to watching videos....I think he's referring to the interaction and emersion of video teleconferencing between campuses.....we have successfully done this previously and it works if the network allows for it...
Reply  |  Post Message  |  Messages List  |  Start a Board

I'm also having a tough time figuring out where the 7 device estimate came from... phone, laptop, tablet, kindle... iPod? desktop PC? printer? I can't imagine why a student would bring all that (especially the desktop) but I guess it's possible.
Reply  |  Post Message  |  Messages List  |  Start a Board

College campuses are indeed the best possible place to test sometihng like this. If it can succeed there, it can go anywhere. Which devices make up the 7 students bring. I'm having issues figuring out what they might have. A phone, a laptop, a tablet, and maybe a separate Kindle, other than that what wireless devices would they be using? Speakers?
Reply  |  Post Message  |  Messages List  |  Start a Board

Ariella I am not sure that it's as big of an issue in K-12 because many students are still not allowed to bring multiple devices in to school as they would be on college campuses where students both reside and go to school . While the use of technology in classrooms is certainly growing for the better of all students I don't know the K-12 classes are placing quite the strain that thousands of students on the university to campus would place on the infrastructure. I think this is a great enhancement for all college campuses to increase faculty and student efficiency day to day.
Reply  |  Post Message  |  Messages List  |  Start a Board

@zerox203 What you say is also an issue in K-12 schools. Many now set up smart boards in the classrooms. Younger teachers tend to use them (though what they do with it is very much like what teachers did with projectors back in the day). Many of the older teaachers just stick with the low tech board and handouts, though.
Reply  |  Post Message  |  Messages List  |  Start a Board

I would love to see the data on this. I could see 3 devices (phone, tablet, laptop) being common, but even if you count 3 gaming devices (xbox, ps, wii), that's only 6 for students living in a dorm, which could be handled with a wired network.
Reply  |  Post Message  |  Messages List  |  Start a Board

For something that appears on the surface to be a subdvision (Wave 2) of a subdivision (802.11ac) of a standard (802.11), 802.11ac Wave 2 seems poised to make an awful big splash. I've heard about the MU-MIMO support before, as well as specific technologies tied to 802.11ac to help minimize interference and ensure continuous connection between a client and an AP once established. They're called Transmit Beam Forming (TBF) and Low Density Parity Check (LDPC), respectively, and I've heard them described as basically boosting the 'clarity' of the signal so it's easier for the client so to receive it consistently. Though these are available in Wave 1 already, it seems alongside the MU-MIMO support for Wave 2, they'll offer a nice boost for networks supporting large and varying numbers of client devices - like university campuses. I wonder if that's a conscious consideration at HCC.

As for the issue of video and oversaturation of schools, I think Ariellia has a good point. I was expecting to hear a little more about an overarching plan HCC had for integrating video into their curriculum in a meaningful way that went along with the Wave 2 deployment. Now, maybe they do, and it's just outside Mr. Cooper's job duties, but there are lots of great solutions out there for this, and throwing more bandwidth at the teachers is only one part of the equation. On that note, I think the Cisco exec may even have been downplaying the extent to which student entertainment is responsible for this bandwidth. There are plenty of tech-savvy professors, but there are far more students. I can hardly blame them for being demanding with the rising cost of living at school, but that's definitely a difficult balancing act that few professionals can claim to handle. Respect to the logistics there.
Reply  |  Post Message  |  Messages List  |  Start a Board

He said, ""In the classroom environment, the faculty has the need for more pervasive video use. This opens up the possibility to do more video interaction between student and faculty," Cooper said."

Back in my undergrad days some of the classrooms were specially designed for video with built in projectors, screens, and stadium seating. I suppose that a lot more instructors want to show video without requiring the whole getup. The thing to remember, though, is not to overuse video just because it is so availble. Even back in the day I thought that one instructor relied way too much on videos, which were not all that exciting for the students.
Reply  |  Post Message  |  Messages List  |  Start a Board
Editors' Choice
Hot Topics