Here's a yearend toast to the top headlines in cloud, mobile, integrated marketing, embedded analytics, and software license management in 2014.

OK, a few other topics did matter in 2014, like mobile apps, integrated marketing, embedded analytics, and a fresh look at software licensing. But all these trends are closely intertwined with the cloud movement. Mobile apps interface with cloud-based services. Marketing apps, now mashed up with sales and service, are invariably delivered via the cloud. Cloud-based calls to data and analytic services will bring contextual intelligence to apps. And the movement to per-user subscriptions in the cloud is triggering many companies to consider what on-premises applications they have installed, which ones they're actually using, and which ones they can retire as part of a software spend analysis.

Here, then, is a closer look at the enterprise application trends and headlines that grabbed our attention in 2014.

1. Cloud rules
Forget the old "core versus edge" cloud hedging by SAP and the "applications unlimited" (on-premises app) yarn from Oracle. Both of these enterprise applications giants saw the handwriting on the wall in 2013 and went all in on the cloud in 2014.

In SAP's case, it's a private, Hana-powered cloud for core apps like ERP (which isn't the kind of cloud most people expect), but the company also spent more than $9 billion in 2014 to add Fieldglass and Concur to its SaaS-based e-commerce business network. Oracle, meanwhile, is laser-focused on its clouds, and it only mentions the likes of Salesforce and Workday as competitors.

The reality, of course, is that the vast majority of enterprise apps are deployed on premises. But at user conferences this year -- such as Sapphire, Oracle OpenWorld, Microsoft Convergence, and others -- the discussions were heavily focused on new or expanded cloud apps and cloud-deployment options. Here are a few of the headlines that captured reader attention:

2. Marketing tech meets sales, service
The big marketing tech buys -- ExactTarget to Salesforce, Marketing Pilot to Microsoft, Eloqua and Responsys to Oracle, SeeWhy to SAP -- all went down in 2012 and 2013, but the integration work took time to bear fruit. In 2014, we saw marketing capabilities exposed in the context of sales and service, and sales and service transactions records and insights brought back into the campaign planning and execution mix. Consider these leading examples of integration:

3. Mobile-first gets real
Many applications vendors launched new or updated mobile apps -- embracing HTML5; introducing "consumer-grade" user interfaces; and letting users take actions, not just look up information. Others, notably Salesforce, went the extra mile and actually made it easier for companies to build and deploy their own mobile apps. Here's a taste of notable mobile announcements from 2014:

4. Analytics everywhere
Analytic apps (think Siebel) and application-embedded analytics have been around for a long time. The idea is to expose the business intelligence within the context of the business process, rather than forcing workers to open up separate BI apps. An internal banking application supporting various customer services, for example, might feature embedded dashboards or metrics showing the satisfaction level, loyalty, share of wallet, and risk tied to specific customers, so bank personnel cloud serve them accordingly. Sales apps featuring cross-sell and upsell recommendations are another example. 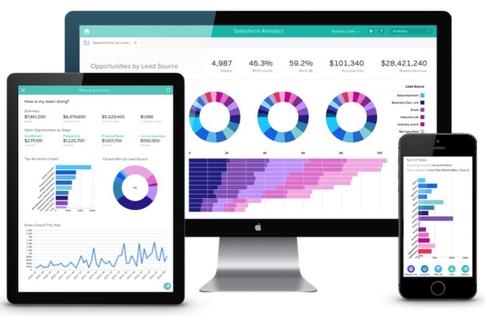 Salesforce's Wave Analytics Cloud ranks among the most important enterprise applications announcements of 2014.

The biggest news in this vein in 2014 was the introduction of Salesforce's Wave Analytics Cloud. If Salesforce and others can deliver key insights and metrics within the context of mobile sales and service apps -- pulling in data from backend apps in the process -- it's going to have a big impact on the use of third-party BI systems and cloud add-on apps.

As SAP co-founder Hasso Plattner has observed, the separation of transactional and analytical apps is unnatural. The practice became entrenched decades ago only because the technologies available at the time couldn't handle both at once. Cloud, mobile, and in-memory capabilities are putting these worlds back together. Here's a sampling of notable analytic app, embedded analytic, and in-memory acceleration announcements in 2014:

5. Software licensing reexamined
Plenty of companies have had enough of spiraling software costs, so they're trying to figure out what they own and what they use with IT asset management systems and software license optimization software. Software audits are one big sore point. Complicated rules and gotcha terms are another. Organizations like the Campaign for Clear Licensing have also emerged to raise awareness of licensing issues and champion customer rights.

Rather than wait for audits and billing surprises, companies are increasingly using these management systems to bring license entitlements, installs, and actual software usage into sync. Customers, analysts, and vendors with experience share this advice on how to take control:

Our best advice for 2015? Take control of the legacy environment, envision a cloud- and mobile-enabled future, move out of maintenance mode, and embrace innovation. Happy New Year.

Doug Henschen is Executive Editor of InformationWeek, where he covers the intersection of enterprise applications with information management, business intelligence, big data and analytics. He previously served as editor in chief of Intelligent Enterprise, editor in chief of ... View Full Bio
We welcome your comments on this topic on our social media channels, or [contact us directly] with questions about the site.
Comment  |
Email This  |
Print  |
RSS
More Insights
Webcasts
Key technology trends in 2021 - Making these technologies work for your business
Detecting and Preventing Insider Data Leaks
More Webcasts
White Papers
Why Add Security to Your Skill Set and How to Do It
Data Orchestration: Critical Elements for Data Strategy and Infrastructure
More White Papers
Reports
2021 Top Enterprise IT Trends - Network Computing
Are Unprotected Cloud Databases Leaking Your Data?
More Reports

Kenandy, Microsoft (with AX on Azure) NetSuite, Oracle (with Fusion), SAP (with Business ByDesign and "Simple" apps), and Workday are all showing that ERP is next. Are you calling that "low hanging fruit," or were you thinking about CRM and HR apps?

In my book, most custom apps and many really big deployments will stay put on premises. But any broadly popular packaged app will increasingly go SaaS.
Reply  |  Post Message  |  Messages List  |  Start a Board

While many custom apps for the enterprise are likely to be built in the cloud, it's not clear to me how much of the existing application base will shift to SaaS or cloud infrastructure. Much of it in the long run, which might be 20 years of effort. Salesforce.com, NetSuite, Intuit, Workday, ServiceNow and Intaact have all picked some of the most promising fruit. What's the next round of applications to move into SaaS?
Reply  |  Post Message  |  Messages List  |  Start a Board

One of my (rejected) themes was in-memory enablement. Microsoft and Oracle followed SAP into mainstream in-memory database support in 2014. Oracle had TimesTen previously, but that's a niche product used for industry apps in telco. The 12c In-Memory Option is for any app -- the biggest performance gain is for analytic apps (claimed to be 10x to 100x) while transactional gains are more modest ("at least 2X," according to Oracle). Microsoft's SQL Server In-Memory OLTP option is, as the name suggests, all about transactional app performance improvement.

If you have apps the require the crunching of lots of data (dunning, production planning, forecasting, etc.), these in-memory opitions let you store specific tables in memory for much faster performance. SAP Hana is all-in-memory, but it has interestingly introduced an option to put selected information that is NOT important or hot on disk for lower cost. Bottom line is enterprise apps are no longer constrained by data and I/O bottlenecks.
Reply  |  Post Message  |  Messages List  |  Start a Board
Editors' Choice
Hot Topics