even midsize companies invariably manage hundreds of software titles. "You'll get one version of the truth out of each tool, but companies have to bridge the gaps between those tools," Konary says.

Most companies try to bridge those gaps using spreadsheets and paper, but IT organizations are warming to third-party license management and license-optimization software as audit activity increases. The license management systems start with discovery tools that promise to spot all installed software, and with inventory tools for compiling and tracking all licenses. They also compile usage information so that companies can begin to assess licensing levels. Vendors in this camp include 1E, Express Metrix, and Snow Software.

Sophisticated license-optimization systems analyze exact license terms and entitlements, relying on libraries of vendor-specific SKUs (stock-keeping units) and usage rights. By knowing how employees are using software versus the various usage rights, companies might be able to downgrade or eliminate some licenses. Vendors in this camp include Aspera Technologies and Flexera Software.

License management and license-optimization software vendors aren't always as transparent about their own prices, however. Aspera and Flexera declined to disclose pricing. Express Metrix puts the price of its license management software at $5 to $15 per seat, depending on volumes. If a $50 million company can buy 500 seats at $15 per seat, that's just $7,500. And if a $4 billion company can buy 20,000 seats at $5 per seat, that's $100,000. That's not even close to those $263,000 and $1.6 million true-up fines that companies of this size typically face. Keep in mind, though, that more sophisticated optimization software costs more. 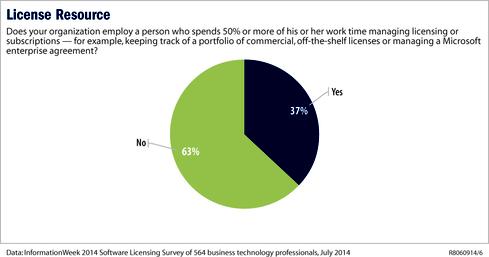 Software alone can't solve your licensing challenges, so you should also consider the cost of training a current employee or hiring an experienced full-time employee to focus on managing software licenses. According to our 2014 Software Licensing Survey, which had 564 respondents, 37% of companies employ a person who spends half or more of his or her work time managing licensing and subscriptions.

Whether these managers are part time or full time, they should be among the leaders of a company-wide effort to develop processes, policies, and training programs around software licensing. Our survey finds that lines of collaboration already exist, with more than half of respondents reporting that C-level executives and purchasing departments (each at 52%) are involved in decisions about software contracts, licenses, and subscriptions. Line-of-business executives also get involved in licensing, but this happens mostly when software purchases exceed certain dollar thresholds (72%) or involve enterprise software (66%).

How To Get A Grip
Eighteen months ago, Hearst Corp. hired Shawn Bennett for the full-time position of executive director, IT procurement, to take control of software spending. He had played a similar role at Liberty Mutual, a $38 billion insurance company. His goal is simple: "purchasing more software for less money." Bennett looks to do that by not just tracking software purchases and installations, but also by analyzing usage and entitlements to optimize software spending and get better deals by leveraging Hearst's purchasing power.

Hearst, a company with 20,000 employees and $4 billion in revenue, had master purchasing agreements for popular Microsoft and Adobe products. But with offices for 20 newspapers and more than 20 TV and radio stations, Hearst suspected that employees were buying locally without tracking installs and usage and without taking advantage of or contributing to corporate discounts.

"Everybody knows, somewhere in filing cabinets, what was purchased, but the first thing you need to do is find out what you actually have out there," says Bennett, who went through a formal RFP process before subscribing to Flexera's cloud-based software license-optimization applications about a year ago. "To bring all that together in one system was a huge value to us."

Flexera's FlexNet application took install data from Hearst's IT asset management tools, including Microsoft's SCCM and Symantec's Altiris client management suite. For software not tracked by vendor-specific or third-party tools, Flexera also has a discovery application that identifies what's installed on desktops and servers. "Within a few weeks I was able to plug existing tooling into the system, and I had clear visibility into what we have installed," Bennett says.

Answering a seemingly simple question like, "How much Microsoft Office do we have installed?" would previously have taken weeks, Bennett says, because the information had to be pulled from 20 places and aggregated. "Now I can push a button and I'm able to answer that question with confidence," he says.

Like other IT asset management tools, Microsoft's SCCM discovers what's installed on each machine, but these details are buried in complex reports that aren't geared to quickly answering the big questions in audit scenarios, Bennett says. FlexNet delivers an aggregated view formatted for license compliance and software optimization.

Go On Offense
Getting a handle on software installs is just a first step. Next, Hearst uploaded all of its software purchasing information into FlexNet so it could compare licenses to installs and get a sense of the company's compliance position for each software title. "It sounds simple, but it was a pretty monumental task pulling together all the historical purchase records from various filing cabinets and locations throughout the company," Bennett says. 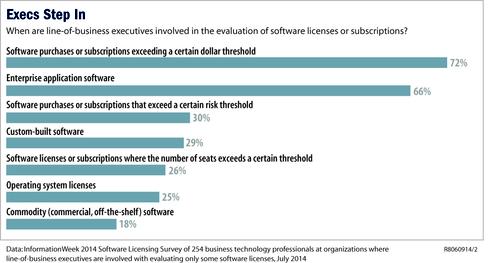 Hearst chose Flexera in large part because it has vendor SKU and product-use rights libraries, covering more than 14,000 vendors. "The software reads the SKU information, and with that it knows how that product is licensed, including whether there are upgrade or downgrade rights," he says.

The final step, comparing software usage to licenses and usage rights, combats shelfware. If a company finds that software allocated to

Thanks for your comments. I did mention that the audit-in-the-last-two-years figure is even higher, 40%, for companies with more than 500 employees. I've seen studies from Flexera and Express Metrix with even higher figures for larger companies, but we didn't break out a higher split in our study.
Reply  |  Post Message  |  Messages List  |  Start a Board

What a long-overdue topic for a second look at many organizations. It's refreshing to see an an article so comprehensive on a topic that's so oft-overlooked, especially in a world of quick blogs, vague blurbs, and buzzword-laden tweets. Instead, these points are made here with plenty of numbers to back them up, insights from real people in the industry, and, most importantly, specific tips and best practices for how to do it better at your organization.You can't blame people for wanting to ignore licensing for as long as they can - it's complicated and, frankly, boring. This article makes a great case for not only why you should worry about it, but how to do so without losing sleep.

The numbers themselves do offer a bit of a mixed picture though, don't they? 1/3rd of organizations were audited in the last two years - and that doesn't say anything for the size or industry of those companies, or how those audits turned out. That still makes it sound like an okay bet to stick your head in the sand and pretend like you're not going to be audited. The cost savings and license management benefits are the real kickers to me. There are headaches other than just audits to worry about  when it comes to licensing - and how great if you can get one service that takes care of all of them!
Reply  |  Post Message  |  Messages List  |  Start a Board

Thanks for catching that stray "IBM." Beaupoil's quote addressed a prominent IBM licensing product, but his company, Aspera, is not affiliated with IBM. The reference was corrected accordingly.
Reply  |  Post Message  |  Messages List  |  Start a Board

You say all in 3 pages! This war is not going to stop. Great post.

Remark: I guess it is not true to say "Christof Beaupoil, co-founder and president of IBM's Aspera Technologies", Aspera is not linked to IBM at all. There a couple of organizations named Aspera, the one involved in SAM space is not belonging to IBM.
Reply  |  Post Message  |  Messages List  |  Start a Board

Yes, the best defense is a good offense, especially for the mid-sized companies that don't have large IT staffs. I am surprised that 37% of companies surveyed have been audited in the last 24 months. The software vendors are investing heavily in auditing customers.
Reply  |  Post Message  |  Messages List  |  Start a Board

Great post. I can't stress enough the hidden benefits of finding spare software. Talk about getting kudos, when you can circulate an email that says "hey, we have 15 spare unused copies of Photoshop, anyone have a use for them?"

p.s. Microsofts SCCM is not free as is implied. In fact the licensing for it is very complex with client and server licensing and has an entire pdf devoted to trying to figure out how much it will cost you.
Reply  |  Post Message  |  Messages List  |  Start a Board

Midsize and larger companies deal with hundreds of software titles, and between different locations and business units, there's no way you can keep track of it all with spreadsheets and paper files. License-management and sofware-license-optimization software can help, but you'll also need policies and procedures to ensure that you're licensing only the sofware that you need and that you're getting every discount you deserve.
Reply  |  Post Message  |  Messages List  |  Start a Board

I cannot agree more with the points raised in this post. As IT manager, you cannot simply be reactive for software licensing to fulfil audit requirements. You need to take full responsbility for proper software licensing. It means to become on top of the issue and fully understand/manage the proper licensing fulfilling your enterprise needs.
Reply  |  Post Message  |  Messages List  |  Start a Board
Editors' Choice
Hot Topics