What is it about the net neutrality debate that inspires so many uninformed opinions and misguided comparisons?

Everyone's got an opinion on net neutrality. Unfortunately, informed opinions on this matter are scarcer than scintillating conversations on The Maury Povich Show. As the late, great US Sen. Daniel Patrick Moynihan once said, "Everyone is entitled to his own opinion, but not his own set of facts."

I'm of a mixed mind on net neutrality. I'm sympathetic to the argument that without some sort of regulation keeping network operators from favoring one content provider's traffic over a competitor's, the Internet could become something of a protection racket, with ISPs slowing the traffic of providers that don't pay up for "fast lane" treatment. But I also think we underestimate the power of consumer backlash to keep rogue ISPs in line. When Comcast blocked BitTorrent file sharing intermittently back in 2007, a public outcry forced Comcast to stop. I'm also sympathetic to letting network owners and operators charge bandwidth hogs such as Netflix, YouTube, and Hulu a premium.

Although the net neutrality issue is far from black and white, I do believe the crux of the matter is competition, not regulation. In markets that can commercially support more than two ISPs, we need to figure out the right mix of regulation and incentive to encourage new last-mile competitors, whether they deliver service via landlines, airwaves, satellites, or some other means. Vigorous ISP competition will cure a lot of ills.

Meantime, in arguing the pros and cons of net neutrality we need to address the facts straight on, rather than drift into metaphorical tangents, non sequiturs, and bluster. Here are several recent arguments, on both sides of the issue, that miss the point and lead to more confusion:

Do it for the children
In a Nov. 11 letter to President Obama thanking him for his support of net neutrality, Jaci Clement, CEO of media watchdog Fair Media Council, calls net neutrality a "gift to America's children" -- ostensibly because it helps develop their critical thinking and deductive reasoning skills and sort fact from opinion. "Mr. President," she writes, "keeping the Internet neutral is vital, but it's also the foundation for something greater: Media savvy kids will grow up to be world-class citizens." 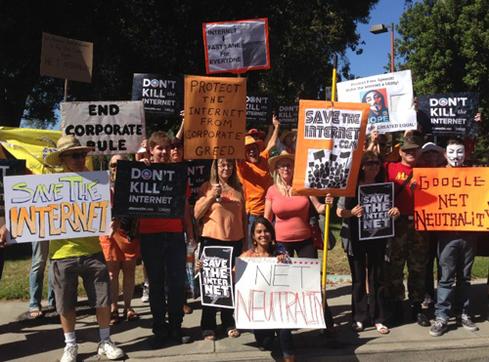 Isn't that special: Net neutrality rules are for "the children." Problem is, being "media savvy" and understanding the difference between fact and opinion have absolutely nothing to do with net neutrality. It's as if Clement read "net" and "neutrality" and formed her own conclusions without doing any research.

The evil opposition
In a blog on Engadget, author Daniel Cooper starts out by saying, "Far as we can tell, the only people against net neutrality are the ones who want to keep holding Netflix to [sic] ransom." So why, in the very next sentence, does he proceed to report on a whole bunch of other folks who oppose net neutrality? Namely, the CEOs of 60 technology companies, including Cisco, IBM, Intel, and Qualcomm, who have signed a letter opposing reclassifying broadband service under Title II of the Communications Act of 1936 because doing so, they say, could stall broadband investment. Confusing.

Odd collusion
In a piece titled "The hypocrisy of Republican opposition to net neutrality," Pando Daily editor David Holmes blasts free marketers for making half-baked arguments against net neutrality regulation. Fair enough. But then his conclusion is a head-scratcher:

"And while Obama's proposal may technically constitute government interference, the alternative -- wherein incumbents can keep newcomers out through exorbitant broadband prices -- is hardly a recipe for entrepreneurship and innovation." The "incumbents" would have to be the ISPs, so which types of "newcomers" are they keeping out through exorbitant broadband prices? Small Netflix and YouTube competitors? If so, why exactly would it be in the interests of the ISPs to collude with Netflix and YouTube to keep those newcomers out?

The Ma Bell card
In a recent Wall Street Journal op ed piece, writer and investor Andy Kessler, a onetime AT&T employee, worries that an Internet governed by Title II regulations will bring it back to the Ma Bell telecom era, during which time AT&T sat on its transistor, touch-tone dialing, cellphone, and other innovations to protect existing revenue streams.

But AT&T was able to withhold those innovations not because it was Title II-regulated, but because it was a government-mandated monopoly. It's not even clear which of Title II's more than 100 pages of common carrier regulations would come into force under net neutrality -- or even if Title II would in fact be the governing authority. (It's the reason AT&T said recently that it would hold off on some of its broadband investments: The future regulatory picture is still unclear.) And just because a set of regulations is decades old doesn't necessarily mean that all of them are outdated. Show us specifically which ones are outdated, and why, and then let's get down to the business of creating proper ones, where they're needed, and clearing away the dross.

Rocky road to nowhere
Writer Jeffrey Dorfman, in a piece on Forbes.com titled "Net Neutrality Is A Bad Idea Supported By Poor Analogies," offers up a poor analogy or two of his own.

He writes: "Net neutrality seems like a simple concept: the company that links your computer/tablet/smartphone to the Internet should not be able to discriminate among users and providers in the level of connectivity service provided. That is, we should all be able to send and receive the same number of bits of data per second. This is a bad idea for the same reason that only having vanilla ice cream for sale is a bad idea: some people want, and are willing to pay for, something different." Dorfman goes on to say: "The fact that some businesses or consumers may choose to pay for better access to the Internet is not a bad thing."

But ISPs already charge business and consumer customers different prices for different levels of connectivity. Those customers already have their multiple flavors. That's not in question here. Net neutrality isn't about what ISPs can charge consumers and businesses for Internet access; it's about what ISPs can charge content providers for prioritized delivery of their traffic to those consumers and businesses.

What is it about the net neutrality issue that brings out the caps-locked-commenting extremists complaining about the greedy billionaires and their master plot to destroy the Internet, or the end of capitalism and freedom? Let's move away from the bluster (please) and instead have a thoughtful debate based on the facts.

Rob Preston currently serves as VP and editor in chief of InformationWeek, where he oversees the editorial content and direction of its various website, digital magazine, Webcast, live and virtual event, and other products. Rob has 25 years of experience in high-tech ... View Full Bio
We welcome your comments on this topic on our social media channels, or [contact us directly] with questions about the site.
Comment  |
Email This  |
Print  |
RSS
More Insights
Webcasts
Take DevOps to the Next Level
How the Rapid Shift to Remote Work Impacted IT Complexity and Post-Pandemic Security Priorities
More Webcasts
White Papers
2020 SANS Enterprise Cloud Incident Response Survey
The Need for Speed: Second Generation EDR
More White Papers
Reports
Dark Reading Report: Battle for the Endpoint
The State of CCPA 2021
More Reports

"The fact that some businesses or consumers may choose to pay for better access to the Internet is not a bad thing."

But this isn't the issue. You can have speed correspond to payment amount under net neutrality. But net neutrality rules would prohibit, say, paying for 100Mbps and then being told that for you'll need to pay again to get that. Or just not being provided with that speed, because you run a service that competes with an ISP-affiliated business.
Reply  |  Post Message  |  Messages List  |  Start a Board

I realize that competition is far from a given. That's why regulators and legislators need to focus on ways to foster it. Everything else is a side issue. As i indicated in the piece, vibrant competition cures a lot of ills -- it keeps bad supplier behavior in check.
Reply  |  Post Message  |  Messages List  |  Start a Board
InformationWeek Is Getting an Upgrade!