50%
Tweet
With a suite of services to help companies deploy and manage Apple computers, IBM is adapting to a shift in enterprise IT.

IBM on Wednesday introduced cloud-based IT services to ease the integration of Apple Mac computers into enterprise environments.

IBM MobileFirst Managed Mobility Services represent an expansion of a partnership that has evolved over the years, most recently with IBM's commitment last year to develop iOS software for businesses and to promote Apple mobile hardware to its customers. IBM presently offers about 35 MobileFirst for iOS apps and plans to have 100 by the end of the year.

In the 1980s, Apple computers were seldom adopted by businesses because they were not "IBM compatible." In the 1990s, Apple, IBM, and Motorola formed the AIM alliance to develop the PowerPC chip architecture as a way to challenge Intel and Microsoft, often referred to as "Wintel." That didn't work out and Apple switched to Intel silicon in 2006. Then, in 2007, Apple launched the iPhone and within a few years, with the help of Google and Android, the Wintel alliance became an anachronism. But IBM faced problems, too, as the server business shifted to the cloud.

Having spent well over $100 billion since 2000 to sustain its stock price by buying its own shares, IBM reimagined itself as a cloud computing company in 2013 with its acquisition of SoftLayer, a shift supported by its $1.2 billion data center investment in 2014. By becoming "Apple compatible" and focusing on cloud services and analytics (as well as workforce reduction), IBM aims to reverse 13 consecutive quarters of declining revenue. 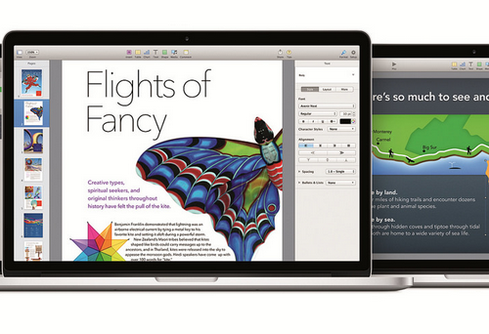 Macs represent a rising requirement in enterprises, through direct adoption as well as corporate tolerance for employees using Macs, according to IBM. Mac sales growth has outpaced PC sales growth every year for the past decade. As measured by IDC, Mac sales increased 16.1% year-over-year in the quarter ended June 30, while PC sales declined 11.8%.

The growing popularity of Macs in businesses can be attributed, in part, to the popularity of iOS devices in the workplace. With iPhones and iPads being embraced by organizations around the globe, Macs have become an easier sell in the enterprise. For IBM, that's an opportunity to make Macs easier to install and manage.

IBM is providing OS and image management, app installation and update management, automatic compliance and security updates, inventory and reporting for hardware and software, and an enterprise app catalog. In addition, it is offering self-help resources through which users can reset passwords, interact via chat or forums, and access help desk services.

IBM's Mac services rely on JAMF Software's Casper Suite, management software developed specifically for Apple products. Last year, JAMF Software paid Dimension Research to conduct a survey of more than 300 IT professionals. The survey found – fortunately enough for JAMF Software – that 98% of respondents expect Apple device growth in enterprises will increase by 25% over the next three years. It also found that more than 90% of businesses use Apple products and that 60% support Macs, to some extent at least.

VMware engaged Dimension Research for a similar study last year involving some 376 IT professionals. That study indicates 66% of businesses are using Macs in the workplace. In a blog post, Erik Frieberg, VP of marketing at VMware, goes so far as to declare: "Perhaps the biggest takeaway from the results is that Windows is no longer the platform of choice in the enterprise with users overwhelmingly preferring Macs."

Macs may be the platform of choice, but in many companies, platform choice isn't an option. Windows is often the only item on the menu. Forrester last year said Apple desktop computers represent only 2% of the desktop computers used in enterprises, while Apple MacBooks represent 6% of enterprise laptops. In Q2 2015, roughly 13 PCs were sold worldwide for every Mac, according to IDC, which counts Chrome OS devices as PCs. While that appears to be a better ratio than Apple has seen since the mid-1990s, it shouldn't be mistaken for market dominance. Some day, perhaps, but not yet.

Still, Macs sales continue to rise, and that's where IBM wants to go too.

Thomas Claburn has been writing about business and technology since 1996, for publications such as New Architect, PC Computing, InformationWeek, Salon, Wired, and Ziff Davis Smart Business. Before that, he worked in film and television, having earned a not particularly useful ... View Full Bio
We welcome your comments on this topic on our social media channels, or [contact us directly] with questions about the site.
Comment  |
Email This  |
Print  |
RSS
More Insights
Webcasts
Automating Security Functions in Your Enterprise
Edge Computing: An IT Platform for the New Enterprise
More Webcasts
White Papers
2020 Gartner Market Guide for Network Detection & Response
How You Can Evaluate Your Org's Cybersecurity Readiness
More White Papers
Reports
The AI and Human Element Security Sentiment Study
Collective Offense Calls for Collective Defense
More Reports

Interesting idea to grab onto the coat tails of Apple by providing an easy way to incorporate Mac's into the enterprise. It looks like IBM needs to do something innovative based on their numbers.
Reply  |  Post Message  |  Messages List  |  Start a Board

I think on this aspect IBM is trying to be adaptive to the trend. First of all, why IBM should treat Apple as an enemy? These two giants have more chance to cooperate than to compete.
Reply  |  Post Message  |  Messages List  |  Start a Board

Is this a "know thy enemy" kind of tactic?
Reply  |  Post Message  |  Messages List  |  Start a Board
Editors' Choice
Hot Topics