How To Be An Office Hero: 3 Myths, Busted - InformationWeek

You rely on a set of social assumptions to get ahead at work, but some of those assumptions don't match with science.

No matter where you are on the org chart, you've always got someone to impress. The new help desk hire has to impress everyone. The CIO has to impress the CEO. Even the CEO has to impress the board and the shareholders. To do that, we all employ a series of social strategies that we hope will help us go up the corporate ladder. With each promotion we assume that we're doing the right thing, but once in a while science throws us a curve ball and teaches us what we've been doing all along might not be the best strategy. Here are three recent findings that have shown you might not being doing everything necessary to be an office hero.

Myth No. 1: Under-promising and over-delivering is the best way to impress
It turns out this might be wrong, and it might be costing you valuable time and effort that you could be using on other tasks. New research (subscription required) from the University of Chicago's Booth School of Business shows that people are very grateful when you keep a promise, but there are few additional returns on exceeding that promise.

In fact, on occasion, exceeding the promise is looked on in a negative light. This is not only true for people but for businesses dealing with customers. For instance, the team asked undergrads to purchase concert tickets from a mock website. The purchased tickets were for row 10. But people in the study were sent tickets that were better, worse, or exactly what was ordered. Not surprisingly, those receiving tickets worse than row 10 were annoyed. But more surprisingly, those who received better tickets reported that they were less happy than those who get the tickets they bought.

[Experienced? Be proud. Read IT Leaders, You're The Cavemen Who Survived.]

So the next time your boss asks for something on Friday and you burn the midnight oil to get it to him on Wednesday, reconsider what you are doing. She's going to be exactly as grateful as if she got it on Friday. Meanwhile, your ability to make and keep other promises is negatively affected. Better to make and keep a whole bunch of promises than to exceed just one.

Myth No. 2: I know exactly what people think of me
Chances are really good you don't. A shockingly large number of people have no idea when they have "crossed a line" socially or in business settings. Columbia Business School doctoral candidate Abbie Wazlawek studied MBA students in mock negotiations. Wazlawek asked the participants to rate their partner as either too assertive, not assertive enough, or just right. 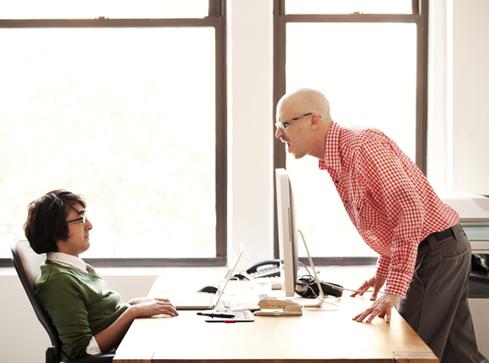 Another finding in the study was that many people who were actually "just right" with their assertiveness felt that they had "crossed a line" and felt too assertive.

This makes for a fun paradox. The findings show that people who are "just right" or under-assertive are leaving "money on the table" in negotiations

@Joe - I capisce.  I grew up the same way.  I also had an IT boss which apparently did as well.  He would promise the moon and stars to our users and dump it on us to figure it out.

Sometimes, I surprised myself how much I could really do when I had no other choice.

Sometimes though, it put us in the awkward position of having to explain to the user that we really couldn't do what we were asked, either because of limited knowledge, resources (human or capital) or time.  Many times the answer came down to this: we can't do what you want unless you are willing to spend X amount more money.

Budget constraints proved to be our savior on multiple occasions.
Reply  |  Post Message  |  Messages List  |  Start a Board

@Technocrati - hahahaha. Yes...note to self: all women want to look good in their engagement pictures...not like they just rolled out of bed.
Reply  |  Post Message  |  Messages List  |  Start a Board

That's a great point, in most cases finishing a project earlier than promised doesn't earn you extra points.
Reply  |  Post Message  |  Messages List  |  Start a Board

re: middle of the pack

That's certainly one prevailing philosophy -- not just where office politics and CRM is concerned, but also with life in general.  The A students are stressed out, built up for failure, and disappointed/embittered.  The F students are obvious failures.  It's the B and C students who excel in the long run.
Reply  |  Post Message  |  Messages List  |  Start a Board

1) Not to the client... I'm using the word "overpromise" in a different sense, obviously.

2) If you're really delivering top-notch service/widgets/whatever, not only will your clients see and appreciate that, but it will make you a better competitor overall in terms of your capacity/infrastructure/what-have-you for attracting and retaining new clients in the future.
Reply  |  Post Message  |  Messages List  |  Start a Board


Lesson: People are much happier when you manage their expectations PROPERLY.

@vnewman2   Thanks for passing along your account of this principle, one I surly won't forget.  : )


Some really good thoughts on over promising along this tread.   I agree it will set an artificial bar which over time will lead to burn out.   And let's face it - bosses don't really care if it is done earlier than planned, just as long as it get done by the deadline.


Thanks David for a really good look at some Office Hero Myths.   I am looking within to see how these myths apply to me, it is very interesting to be guilty of many of the misconceptions.   Two positve things (at least ) have come of this.


1. I have even more awareness of areas of personal improvement and ...


Just stay right in the middle of the pack & try NOT to get noticed.

@ pcharles: Very well said. I believe this is the right way to stay for the time being at a place where performance doesn't matters a lot and promotions aren't expected or encouraged.