Flying drones are coming to the enterprise: Will CIOs and the FAA be ready?

CES 2015: 11 Peeks Into The Future
(Click image for larger view and slideshow.)

Drones. They haunt the nightmares of FAA commissioners, add to the worries of pilots, and give wing to the flying dreams of thousands upon thousands of hobbyists. And they might just be a key to solving a critical business need for your company. Are you ready?

At CES 2015, it seemed that drones were featured every 30 feet along the aisles. From ones with wings to others with rotors, palm-sized to craft that look like they could lift a Holstein, drones were available in just about every configuration and size imaginable. While most were aimed squarely at the consumer market, when I spoke with representatives from manufacturers it became obvious that many were fielding questions (and participating in trials) with a wide variety of enterprise customers.

Before we dive into that, let's clear up some terminology. "Drone" is a generic term for an unmanned vehicle, and many in the industry hate it. Some dislike it because of associations with military vehicles, while others don't appreciate the imprecision of the word. Industry insiders tend to prefer language that gives insight into the configuration of the aircraft: quadcopter (four rotors), hexcopter (six rotors), and octocopter (eight rotors) are the most common. As a rule, more rotors means more lifting capacity, but the field is sufficiently new to render rules more like broad suggestions at this point.

So what are companies doing with all of these unmanned copters? The shortest, catch-all answer is that they're putting cameras (and other sensors) in places where human beings have trouble putting themselves. What are some examples? Let's start with the visual inspection possibilities. In agriculture, large companies are already exploring using quadcopters to inspect fields (or groves) from angles or in spans of time that are difficult to achieve for humans on foot or in ground-based vehicles.

In this footage, the bananas can be rapidly inspected at close range, from the top, in rapid fashion. In other notable examples, drones have been used to inspect large powerplant cooling towers, study lava flows, and explore the limits of a Corvette-swallowing sinkhole.

Things seem even more promising when we look at copters that carry more than simple optical instruments. Amazon and local pizza shops have taken the press spotlight with the possibility of dropping food and electronics into your living room, but more likely (and much more immediate) scenarios include carrying non-optical sensors into difficult locations and delivering specific payloads (think agricultural chemicals) with less cost and more precision than is possible with manned vehicles.

With all of these business cases, the biggest question is about regulation. Where does the industry stand in terms of the legality of doing any of this in US airspace? The answer is that everything is illegal, except those things that aren't. Feel better now?

That's a bit trite, but only a bit. It seems that the FAA, in an attempt to bring some order to the small-scale skies, has claimed authority for every flying thing down to paper airplanes and Andrew Luck's post patterns. While that's a nice thing for it to do for a consistent, legal framework, it creates some unwieldy regulations, as the FAA and general public are finding out. 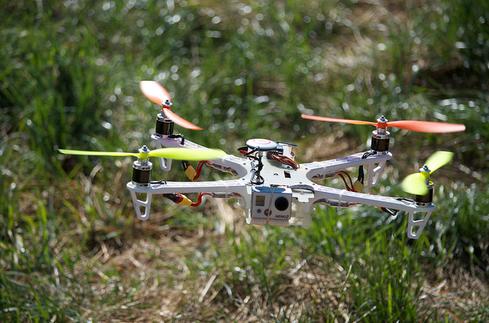 The FAA has given itself until September 2015 to come up with real regulations for commercial use of quadcopters in the US. In certain draft documents, it has indicated that it's on the path to doing so, but that path includes some strange provisions -- like requiring a pilot's license (as in, a license to fly real airplanes) in order to take video from a three-pound consumer quadcopter. In December 2014, the FAA began granting experimental licenses to quadcopter and octocopter pilots, virtually all with ties to the motion picture industry. Until the final regulations are published and adopted... well, I suppose "crop dusting" is as good a hobby as any.

Do you have drones in your enterprise plans? Have you begun to experiment (in a totally non-commercial, entirely legal fashion, of course) with any sort of remote-controlled copter? I'd love to hear what you're doing -- and I'll even share some of the footage I've taken with my quadcopter in the comments.

Curtis Franklin Jr. is Senior Editor at Dark Reading. In this role he focuses on product and technology coverage for the publication. In addition he works on audio and video programming for Dark Reading and contributes to activities at Interop ITX, Black Hat, INsecurity, and ... View Full Bio
We welcome your comments on this topic on our social media channels, or [contact us directly] with questions about the site.
Comment  |
Email This  |
Print  |
RSS
More Insights
Webcasts
SASE: The Right Framework for Today's Distributed Enterprises
Advancing the Hybrid Cloud & App Modernization Journey with IBM
More Webcasts
White Papers
Zero Trust Evaluation Guide
ITSM for the Enterprise - What Makes it Work?
More White Papers
Reports
The Need for Speed: Second Generation EDR
The State of Endpoint Security
More Reports

@Charlie, you absolutely nail the point of the conundrum, here. On the other hand, I hope I'll be excused if I express limited enthusiasm for Yet Another Federal Department.
Reply  |  Post Message  |  Messages List  |  Start a Board

@D Lowery, thanks for adding that to the conversation! I had no idea that the information recorded on a drone's on-board camera might be considered a CCTV system -- though I suppose it would get even more confusing if you separated the video captured to the on-board camera from the video streamed to an FPV monitor in the operator's hands. Hmmmmmm...

This is, indeed, one of many areas in which the weight of our bureaucracy works against innovation in the US. At this point, I'm just hoping that the FAA releases a reasonable set of regulations later this year, though I'm not going to hold my breath.
Reply  |  Post Message  |  Messages List  |  Start a Board

@Tom, the liability issues are already looking interesting. When I talk with the major drone vendors about how they can display their products at trade shows (like CES), guidance from their insurance carrier (and quite often, their legal department) comes up very quickly.

I would almost quibble, though, with the use of "AI" to describe what's going on in the flight control systems. Yes, they're taking input from sensors and responding more quickly than most humans can. Anyone who doesn't believe that should just try flying a quad-copter with the stabilization system disengaged to see how the difficulty goes up. In general, though, they aren't making decisions on where the craft goes or what it does in its flight. Those parameters are given to the system by the "pilot."

Of course, even stabilization systems fail -- I've seen more than one quad-copter head for the horizon despite input from the operator and its own safety systems. Where the liability lies if one of those run-away drones lands on someone's head has yet to be determined in court.
Reply  |  Post Message  |  Messages List  |  Start a Board

@Chris, you're right that was the first approval and it's part of the problem for current drone regulations. The BP drone project uses a fixed-wing drone with a 9.2 foot wingspan. The FAA currently assumes that 18-inch, 2 pound quadcopters should be regulated in exactly the same way. If the final regs don't make a distinction (many countries draw the line at around 5 pounds of total craft weight) then there are going to be enormous problems down the line.
Reply  |  Post Message  |  Messages List  |  Start a Board

Drones actually call for regulation and supervision somewhere between the airborne FAA and land-based Department of Motor Vehicles. Perhaps a federal Department of Hovering Vehicles, covering airspace up to 400 feet?
Reply  |  Post Message  |  Messages List  |  Start a Board

This liability issues for these drones will be interesting, particularly once it becomes apparent there's lots of AI involved in automatic stabilization. Sooner or later one of these things is going to kill someone (unintentionally) or cause an accident.
Reply  |  Post Message  |  Messages List  |  Start a Board

BP has the first FAA approved commercial drone use, for use in the Alaskan oil fields: