0%
Tweet
Handshakes make us feel comfortable in business settings -- and spread germs that make us sick. Perhaps it's time for a new custom.

Consider this an early warning for the flu season: Stop shaking hands! In a little more than two months, your co-workers will be facing a germy gauntlet of doorknobs, subway poles, bathroom stalls, and even family members. If you want to help your colleagues stay healthy, spend the next eight weeks eliminating handshakes and hugs, learn to limit the high fives, and try your best to switch to all fist bumps.

Why am I sharing these tips now? Well, partially to give you time to break habits, but mostly because a new study says that you spread 20 times more germs by handshake than by fist bump. You need to make changes not only with your team, but also in the way that you do business, because the handshake is surprisingly valuable.

The study, conducted at the Institute of Biological, Environmental, and Rural Sciences at Aberystwyth University in Wales, asked volunteers to wear rubber gloves dunked in a solution of e coli. The volunteers then gave each other a handshake, a high five, or a fist bump. The fist bump was found to be 20 times more hygienic than the handshake and 10 times more hygienic than a high five.

The study didn't test this handshake, but I'm guessing it was 100 times worse than all the others.

All kidding aside, there are two competing sides to this issue. One estimate places the cost of sick workers to the US economy at $576 billion. Thirty-nine percent of that figure applies to workers who are sick but still show up and are less productive. Doing anything you can to keep your team healthy can save your company money and improve productivity while keeping key folks at their desks.

[Keep your team healthy and become an office hero. Read How To Be An Office Hero: 3 Myths, Busted.]

On the other hand, the handshake is a valuable business tool. There's a reason we greet colleagues and partners with handshakes and conclude business deals with them. The handshake is hardwired into our brains. Shaking someone's hand doesn't just make you trust someone more (it has actually been known to lower perception of risk in aggressive business deals); it literally triggers happy feelings in your brain. 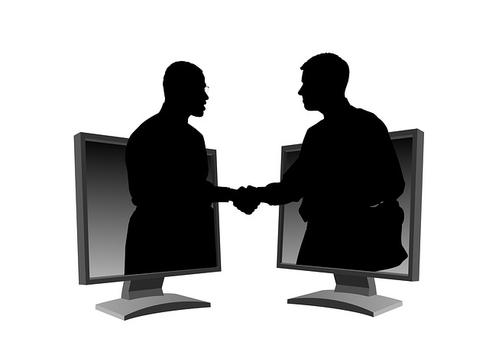 A study published in the Journal of Cognitive Neuroscience studied the value of the handshake in a business setting by showing people animated clips of mock business meetings. Handshakes were included in some of those clips, but not in others. The researchers used a functional MRI, among other equipment, to measure how participants' brains responded to the transactions. When a clip involved a handshake, areas of the brain associated with finding people competent and trustworthy were stimulated.

In other words, the handshake is a major part of business success. We have no idea if a fist bump carries the same value. Perhaps it's just simple human touch of any kind that does it. Perhaps the closer contact of the handshake provides that feeling of trust.

Business is better with handshakes, but is it some subset of $576 billion better? If we all agreed on the new norm of the fist bump, would it even itself out?

There's no ready answer to any of these questions, which is why I'm giving you the rest of the summer to think about it. One thought might be to eliminate handshakes on your team but keep them for customers. But trust within your team is important, too. Another thought is simply to keep a polite distance and not initiate any contact. Let's face it; you aren't going to greet new business contacts with a fist bump. They'll think you're crazy.

What do you think? Shake hands and face/spread an onslaught of germs? Avoid contact? Fist bump? Wave? What would you do?

David has been writing on business and technology for over 10 years and was most recently Managing Editor at Enterpriseefficiency.com. Before that he was an Assistant Editor at MIT Sloan Management Review, where he covered a wide range of business topics including IT, ... View Full Bio
We welcome your comments on this topic on our social media channels, or [contact us directly] with questions about the site.
Comment  |
Email This  |
Print  |
RSS
More Insights
Webcasts
5 Steps to Integrate SAST into the DevSecOps Pipeline
Cloud Security Threats Enterprises Need to Watch
More Webcasts
White Papers
Let's Talk: Why Language Matters in Cybersecurity
6 Emerging Cyber Threats That Enterprises Face in 2020
More White Papers
Reports
Apex Report: Global Cyber Infection
eSentire Annual Threat Intelligence Report: 2019 Perspectives and 2020 Predictions
More Reports

interesting point, as everything changing in time... approach of doing things changing to... how I see it
Reply  |  Post Message  |  Messages List  |  Start a Board

Don't you think a fist bump is too casual for business encounters? I still think we could just nod or bow like the Japanese do. It's respectful, and you don't have to dash off to apply hand sanitizer.


@Glenbren- Well, the interesting thing is that something is as formal and respectful as society decides it is. If we as a group we started heading towards the fist bump in a decade or two it would be so normal people would forget that we used to shake hands. The first time I got hugged in a business setting it blew my mind. I've noticed it occuring more regularly. I'm *almost* used to it.
Reply  |  Post Message  |  Messages List  |  Start a Board

Thank you David for providing some figures to support what I would call the "Howie Mandel Syndrome". The handshake is so baked into societal norms - you look past the fact that you could be getting a major amount of germs during this 5 sec ritual.

I am all for the fist bump, and so far you will only see this in hipster business matters.    Interesting stuff no doubt.

I agree about mutual trust/respect if the cultures recognize it.

Don't you think a fist bump is too casual for business encounters? I still think we could just nod or bow like the Japanese do. It's respectful, and you don't have to dash off to apply hand sanitizer.
Reply  |  Post Message  |  Messages List  |  Start a Board

Two cheeks could be a double source of germ spreading--maybe a double fist bump will  keep everyone healthy in the winter!
Reply  |  Post Message  |  Messages List  |  Start a Board


Dave I once worked for someone who would only fist bump. It was his standard greeting I have never personally initiated a fist bump in a professional setting but it's worth thinking about. I would be concerned about offending a client or associate. I think you need a certain level of familiarity with the person to initiate the fist bump. Sanitizer may be the other answer!
Reply  |  Post Message  |  Messages List  |  Start a Board

Here in Quebec we do the kiss on both cheeks thing once you're familiar.
Reply  |  Post Message  |  Messages List  |  Start a Board

@Glenbren: My guess is that it has something to do with the nonverbal communication that happens in a handshake, from the posture to the contact. Touch is a powerful communicator. Funny thing is, I've found that it's not unusual here in California for hugs to be exchanged in lieu of handshakes once you've reached a certain level of familiarity with a person. (Not in a creepy way).
Reply  |  Post Message  |  Messages List  |  Start a Board

@Susan - Exactly. Now, should this Ebola virus thing start taking on the likes of the movie Outbreak, then sure, we might scale back on the physcial handshake for a season and take on the bow of the Japanese.
Reply  |  Post Message  |  Messages List  |  Start a Board
Page 1 / 4   >   >>
Editors' Choice
Hot Topics