Dell Turns 30: Where To Next? - InformationWeek

Dell celebrates its 30th birthday while working to reinvent itself for the cloud era. What do you want most from Dell now?

Marking its 30th year in business over the weekend, Dell faces a future that doesn't look much like its past.

On May 3, 1984, Michael Dell founded PCs Limited in his dorm room at the University of Texas in Austin. Four years later, he would change the company's name to his own and take the company public.

Dell soared for two decades, making its founder a billionaire and earning a reputation for affordable, reliable computers delivered through efficient manufacturing and logistics.

But personal computer sales slowed for Dell in 2006 and the iPhone arrived in 2007, marking the beginning of the mobile revolution. That was the year Michael Dell resumed leadership of his company in an effort to reduce dependence on revenue from sales of personal computers.

Acquisitions to pave the way to greener pastures such as storage, security, and cloud computing followed: EqualLogic, Perot Systems, Compellent, and SecureWorks were a few of the most noteworthy deals.

Last October, Michael Dell succeeded in his bid to take his public company private, to insulate it from the pressures of quarterly reporting as he reorients his namesake.

In a letter to employees celebrating his company's 30th birthday, Dell said that six months after going private, the results are promising. "Our PC share is up worldwide for the fifth consecutive quarter," said Dell. "We’re leading the industry in enterprise flash deployments, and leading with our security and cloud integration solutions. Our Services business is rapidly acquiring new customers and huge deals in key verticals like healthcare and finance." 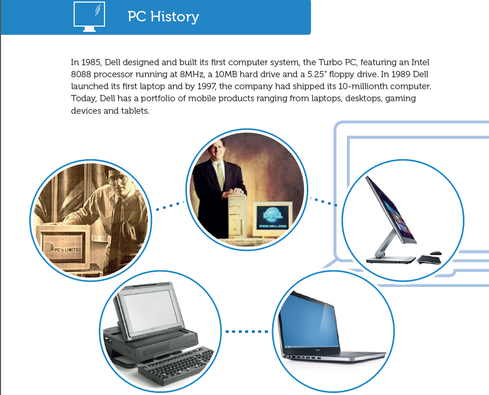 Citing other successes, such as the company's medical image service, Unified Clinical Cloud Archive, and its efforts to deliver enterprise datacenter services, Dell urged his employees not to dwell on the past because "the future is full of promise."

But is Dell's future full of revenue?

Forrester Research analyst David Johnson said in a phone interview that although it has been a long road for Dell to shift from PCs to services and infrastructure, he thinks it's getting there.

To succeed, however, he said Dell needs to help companies deal with the increasing complexity of IT systems. Dell needs to deliver "a molecule and not a collection of atoms," he said. That means working with other IT service partners. Dell has a history of making technology easier to buy, which isn't quite the same as making it easier to use and manage.

The complexity of modern IT might prove difficult to banish. The Wintel monoculture is gone. In its place, there's a lot more complexity. Platforms don't matter nearly as much today as apps and cloud services. Connecting systems through software APIs tends to require more effort than connecting standardized components with wires and cables.

"The days of platforms for servers and end-users are at an end," said Johnson. "The cloud and mobile shakes that up."

How does Dell proceed from here? You tell us. What would you like to see Michael Dell do in his next act? A breakthrough mobile device? A particular kind of cloud service? Share your opinion in the comments section below.

Thomas Claburn has been writing about business and technology since 1996, for publications such as New Architect, PC Computing, InformationWeek, Salon, Wired, and Ziff Davis Smart Business. Before that, he worked in film and television, having earned a not particularly useful ... View Full Bio
We welcome your comments on this topic on our social media channels, or [contact us directly] with questions about the site.
Comment  |
Email This  |
Print  |
RSS
More Insights
Webcasts
What We Can Learn from Sports Analytics
Building the SOC of the Future: Next-Generation Security Operations
More Webcasts
White Papers
The Network for Whatever's Next; A CxO Guide
Zero Trust Evaluation Guide
More White Papers
Reports
2021 Top Enterprise IT Trends
The State of Cloud Computing - Fall 2020
More Reports

What I want from Dell is quality product. Most of my time is wasted on fixing Dell PCs because their failure rate is out of this world. Build quality product, Dell! You are charging more than enough for it.
Reply  |  Post Message  |  Messages List  |  Start a Board

It is very interesting to know that Dell is celebrating their 30th birthday. Dell is a great company with great reputation, and I congratulate them on how they handle their customers, they have perfect services. I know it has not been an easy road to reach this far, but it is encouraging to see Dell still doing well and promising. I would urge Dell to continue to major on what they are good at, that is purely Hardware. I agree with you @TechYogJosh. Happy birthday Dell.
Reply  |  Post Message  |  Messages List  |  Start a Board

Prior to rejoining UBM a couple of years ago, I did a lot of contract work for Dell and was amazed at the number of restructurings I saw within the company. I'd start on a project with one team (as a freelance writer for 12 years), only to see the team and/or its goals change time after time. The people were always dedicated and terrific at their jobs; it was frustrating as a contractor, so I can only imagine how aggravating it must have been as a full-time employee! By comparison, I did similar work for other large integrators and developers, often working with the same people time and again over many years. Often the only changes were that the individuals had been promoted and their spheres of management expanded. Much more satisfying and productive for employees, customers, and the business.
Reply  |  Post Message  |  Messages List  |  Start a Board

This is an excellent point.  I was a Dell customer when they were the barebones hardware vendor without all of the ancillary services and products.  I remember their first attempts to branch out into things like mobile computing (Axiom) and their printer line that IIRC were rebranded Lexmarks.  When this shift away from what brought people like me to their door they lost my attention for the most part.  Now their sales teams are playing catchup trying to figure out how to get customers back.  The problem though is they aren't content with selling you good products at fair prices every talk with them comes with a pitch for extended services, consulting or some gadget that is not quite as good as the competition.
Reply  |  Post Message  |  Messages List  |  Start a Board

Dell should keep on going and somehow survive than try something drastically different that may jeopardise its fundamental existence. There are companies who are struggling such as IBM and HP, but they are known for technology, expertise, and some sort of vision. DELL is known as a pure hardware vendor irrespective of the noise around its software or services. Therefore, my suggestion for Michael Dell will be to sit quiet, continue the company the way it is and if he has to sell out, sell out.
Reply  |  Post Message  |  Messages List  |  Start a Board

Google seems to have the right idea for low-margin high-volume businesses: leave them to partners, like Dell. At least Dell's move into the cloud suggests it may yet improve its margins.
Reply  |  Post Message  |  Messages List  |  Start a Board

Dell has had a strong appetite for acquisitions, as a way to have more to offer the mid-market CIO. Talent is also a factor in acquisitions. Just think: What if Michael Dell bought Nest instead of Google?
Reply  |  Post Message  |  Messages List  |  Start a Board

I'm not sure how a mobile device would help. Dell doesn't have the brand reputation to charge a premium for hardware (unlike Apple), so it would just be opening another low-margin/high-volume business front. I guess Dell does all right at that kind of business, but the mobile market seems so saturated, I'm not sure they could get the volume to make it worthwhile.
Reply  |  Post Message  |  Messages List  |  Start a Board

As the entire idea behind going private (other than to ensure that no one could take the company away from Dell's not quite competent leadership), was to hide their successes, and particularly their failures, from public scrutiny, we have no idea how Dell is doing. They've been criticized for making large software purchases which have added no value to the company. Are they adding value now that we have no idea what Dell is doing? It's doubtful. Dell's marketshare has risen, not because of wonderful sales results, but rather because their sales have fallen more slowly than it has for some others. Not exactly an encouraging result. Right now, any talk about Dell is simply speculation, not backed by facts.
Reply  |  Post Message  |  Messages List  |  Start a Board
Editors' Choice
Hot Topics