New technologies keep on coming, but which are better to invest in now versus later? CompTIA's recently released a prioritized list of top 10 emerging technologies. We compared it with CompTIA's latest State of the Channel Report.

CompTIA's newly-formed Emerging Technology Community recently announced a Top 10 list of emerging technologies it believes will have the greatest near-term impact on vendors' bottom lines, channel opportunities, and end users' ability to drive business value. The purpose of the list is to help separate hype from reality.

Shortly thereafter, CompTIA released its 7th State of the Channel Report which reveals the emerging technologies channel companies are experimenting with or currently offering. While the technologies identified in the channel report and the Top 10 list are almost identical, the priorities reflected differ somewhat.

The following table presents the committee's top 10 picks compared to the channel implementations covered in CompTIA's channel report. As the table reflects, the top three priorities track and the greatest divergence occurs around blockchain. Channel companies appear to be implementing blockchain more aggressively than is reflected in the Emerging Technology Community's priorities. Then again, the Top 10 list does is not limited to channel activity.

InformationWeek inquired about the differences, also asking where or whether Robotics Processing Automation fits. Steven Ostrowski, director of corporate communications at CompTIA said the difference is likely attributable to different work products produced by different groups.

While a Top 10 list is interesting, it isn't always practical. However, the list was only the beginning for CompTIA's Emerging Technology Community. The group is now developing guidelines organizations can use that include factors to consider when contemplating which emerging technologies best suit their needs, whether they're selling the technologies or using them. Specifically, the recommendations will include the competencies and dependencies organizations must understand before they can properly engage with emerging technologies. 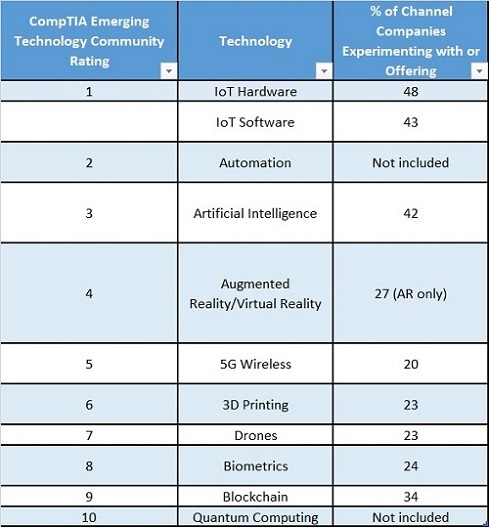