Compare your salary to the median pay for 12 popular IT job titles, from the help desk to the C-suite.

Good news for IT professionals: Salaries are on the rise.

The survey polled 1,900 technology professionals employed in the United States. Half of the respondents worked in management roles, and half held staff positions. Forty-five percent were from enterprises with more than 1,000 employees, and they represented a wide range of industries.

And, when asked what matters to them most about their jobs, respondents said it really is the money. Among participants, 54% selected base pay and 47% said benefits were among the most important aspects of their jobs (up to seven responses were allowed).

The following slides dive into the salary data in more detail and include median total compensation for 12 of the most popular job titles in IT, from the CIO all the way down to the help desk. You can download the full report here.

1. CIO/CTO or Other IT Executive

Not surprisingly, C-level executives are the most highly compensated group in IT. Chief information offers, chief technology officers and other executives said they are earning around $185,000 for 2018. That’s a $15,000 increase over the $170,000 they earned in 2017, and that was the biggest pay raise experienced by any group in the survey.

Among the people who participated in the survey, 9% identified themselves as CIOs, CTOs or other tech executives.

Two job titles tied for second place in this year’s IT salary survey. One of them was vice president of IT, which earned a median total compensation of $155,000. That was a $5,000 increase over the $150,000 they earned in 2017, which was the average salary increase for participants in the survey.

Among respondents, 4% identified themselves as vice presidents of IT.

Security is a hot field within IT. In fact, respondents were most likely to select IT security as the skill they were learning or planning to learn, and identify it as the skill that would be most valuable in their careers. With all that demand, it’s not surprising that chief security offices and those in security management tied for second place among the highest-paying job titles at $155,000. Like several other job titles, the CSO title saw a $5,000 increase in median pay between 2017 and 2018.

Among those surveyed, 3% identified themselves as CSOs or security management.

IT workers with “architect” in their job titles are also among the most highly compensated in the field. These can include network architects, application architects and data architects, among others. This role saw a $5,000 increase in median pay between 2017 and 2018, from $135,000 to $140,000.

Among those surveyed, 4% identified themselves as architects.

Fifth place on the salary list was also a tie. Program managers and project managers have a median total compensation of $115,000 for 2018, up from $110,000 for 2017. As DevOps approaches take hold in the enterprise, PMs are seeing their responsibilities change, but some are also seeing the role become more important within IT teams, which make account for some of the salary increase.

Among those surveyed, 7% identified themselves as program managers or project managers.

Over the past several years, developers have been among some of the most highly compensated people in IT, and that isn’t changing. In fact, the software/Web developer role tied for fifth place on the salary list, placing it ahead of some leadership roles. Median total compensation for developers came in at $115,000 for 2018, $5,000 more than the $110,000 they made in 2017.

Among those surveyed, 4% identified themselves as Web or software developers.

7. Director/Manager, IT, Networking or Infrastructure 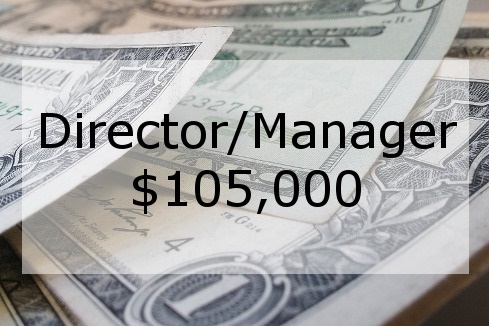 They may be paid less than some of the developers who work for them, but directors and managers are still very well compensated. Median salaries and bonuses totaled $105,000 for this group, up from $100,000 in 2017. It’s also worth noting that that this was a large and diverse group of respondents, and those with a title like “director of IT” likely earn considerably more than those with a title like “networking manager.”

This was the most common job title among survey respondents; 24% identified themselves as directors or managers of IT, networking or infrastructure. 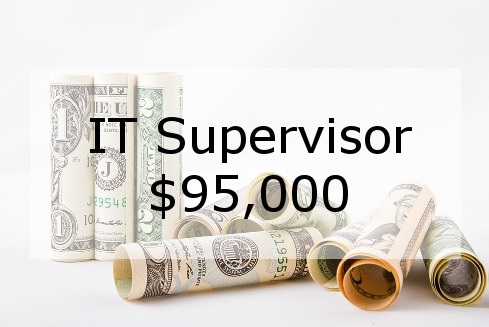 Among those surveyed, 5% identified themselves as IT supervisors.

Interestingly, those with a programmer or analyst job title did not see an increase in pay over the past year. Instead, median total compensation remained flat at $85,000. This is somewhat surprising as the programmer category has some overlap with developers, but it may be that pay for this group has risen so quickly over the past few years that supply and demand are finally evening out.

Among those surveyed, 3% identified themselves as programmers or analysts.

Among those surveyed, 5% identified themselves as systems analysts.

This was the second most common job title among respondents to the survey; 13% identified themselves as IT staff.

The help desk has long been an entry-level position for people interested in working in IT, and it continues to be the lowest-paying on this list, by a wide margin. Median total 2018 compensation for help desk workers was just $55,000, exactly the same as last year.

Among those surveyed, 2% identified themselves as help desk workers.

[Learn more about IT salary trends in the full report.]

Cynthia Harvey is a freelance writer and editor based in the Detroit area. She has been covering the technology industry for more than fifteen years. View Full Bio
We welcome your comments on this topic on our social media channels, or [contact us directly] with questions about the site.
Comment  |
Email This  |
Print  |
RSS
More Insights
Webcasts
Architecting Security for the Internet of Things
Defense and Response Against Insider Threats & User Errors
More Webcasts
White Papers
5 Key Steps for Assessing Your Security Effectiveness
Top 10 Security Technology Trends to Watch, 2020
More White Papers
Reports
SANS Report: Measuring and Improving Cyber Defense Using the MITRE ATT&CK Framework
2020 State of Cybersecurity Operations and Incident Response
More Reports
Copyright © 2020 UBM Electronics, A UBM company, All rights reserved. Privacy Policy | Terms of Service