50%
Tweet
There was no shortage of expert advice and sage predictions as takeaways from last week's Interop ITX conference. Here are some examples.

DevOps Evolving, Seemingly by the Day 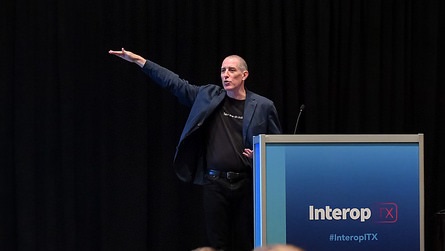 DevOps is no longer just about teaming up developers and operations professionals to generate a stream of code updates that is exponentially greater than what could be done with waterfall development.

In the session DevOps Today: What Does It Mean to You, Rosalind Radcliffe, distinguished engineer at IBM, said DevOps extends beyond the IT group. "It fundamentally changes the way you do business," involving roles from top executives to everyday end users. She said the data produced offers a "single source of truth".

In highlighting how many variations of DevOps exist -- for example, DevSecOps, SecDevOps, DataDevOps, and SciDevOps -- Radcliffe noted that it's all still DevOps. One reason she says to stick with "DevOps" is that it fits nicely on Twitter.

Andi Mann, chief technology advocate for Splunk outlined eight steps in the typical DevOps process, the software development lifecycle (SDLC) that runs from "idea" through "build" up to "deploy" and "monitor".  At each of those stages, he listed three or four commonly used tools.

"Each tool is giving off data, like which developers are doing how much work on which system," he said. The tools also provide data on things like the quality of the application and where issues and delays may crop up. "That data adds value across the software development lifecycle," he noted.

In Modern Skills for IT Professionals, Jayne Groll, CEO of the DevOps Institute, said that Site Reliability Engineer (SRE) will be the next big job in IT.

Jim Connolly is a versatile and experienced technology journalist who has reported on IT trends for more than two decades. As editorial director of InformationWeek and Network Computing, he oversees the day-to-day planning and editing on the site. Most recently he was editor ... View Full Bio
We welcome your comments on this topic on our social media channels, or [contact us directly] with questions about the site.

More Informa Tech Live Events
Staffing & Training a Cyber Incident Response TeamNow That Ransomware Has Gone Nuclear, How Can You Avoid Becoming the Next Victim?Securing Active Directory the Way it Deserves