Marissa Mayer and other tech employers should focus less on an aggressive acqui-hire strategy and more on moonshot engineering goals, current and former Yahoo employees say.

Still here? It's probably because you're too busy to read the above link. Here's what the story, on business news site Quartz, says. Yahoo CFO Ken Goldman credits Mayer -- and the 37 acquisitions Yahoo has made since she joined the company as CEO in July 2012 -- with "changing the attitude and morale and the desire, if you will, to … attract new folks as well as to retain folks we have," he reportedly told a Morgan Stanley investor conference in San Francisco earlier this month. Goldman continued: "So I think -- I'm very confident. If you talk to anybody at Yahoo today you would find them, whether they've been here for a year or five years, they're very, very pleased with what they see in working at Yahoo. I'm absolutely, very confident in that relative to attrition, and our ability to hire all points to that."

Lucky for Goldman, I had a free afternoon last week, so I took his suggestion and called a bunch of current and former Yahoo employees. And sure enough, they all agreed with him. Yay! End of column.

No wait. They didn't agree.

In fact, based on those chats, I'd divide Yahoo employees into four camps:

1. The old-timers. Referred to by the next two camps as the "legacy employee problem" (as in "they're why we can't work from home anymore" and "they failed at managing their own products so now they're managing us"). When this group isn't napping or chewing their cud, they seem overly concerned with how much all the young bulls are getting, um, paid.

2. The acqui-preneurs. These are the aforementioned bulls. They're founders, usually of small, Series B companies, who were smart enough to understand that they couldn't get past their next stage of funding and saw Yahoo as a lucrative inflection point. They understand the importance of failing fast and were savvy enough to leverage their relationships to cash out while the gettin' was good. The people in this camp seem to be dreaming about leaving the day after they vest, what I affectionately call V+1 Day. And by serial entrepreneurship standards, they're the "left-behinds," the ones who didn't quit three months in to start another company.

3. The acqui-gineers. These are the most talented people by my estimation and, not surprisingly, the saddest of the bunch. They're sheep, really, having finally realized that the founders of their companies didn't actually sell a product or a technology or even users to Yahoo -- but rather, them. "Soylent Green is people!!!" Or more accurately, engineers. And remember, after all the venture capitalists take their portion of the spoils, the founders usually get 90% of the remaining proceeds. So the engineers get slightly less than squat.

[Here is another big question Meshing wants you to consider: Build Vs. Buy: A Dangerous Lie.]

Compounding that pain is the fact that most folks from this camp were recruited to the startup lifestyle from someplace Big and are horrified that their lives have come full circle. I imagine that their new corporate cubes each have a little red stapler and a Costco-sized vat of Zoloft. 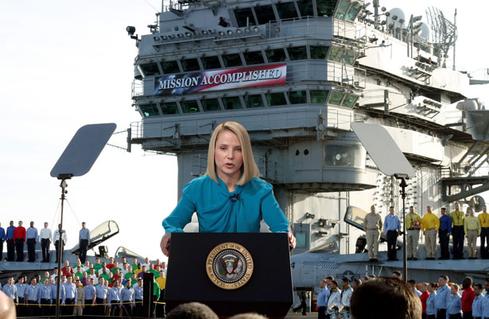 4. The new new. These are employees who signed on during Mayer's tenure via conventional recruiting channels. I didn't chat with any of these folks, but my guess is that they're misadvised frenemies of existing employees. The exploratory phone call that they all made to get "inside info" probably played out like this:

Prospective employee: "Hey, I hear Yahoo is the third-highest-paying employer in the Valley. Anything I should worry about if I end up there?" Friend on the Inside: "Look, it's not Facebook or Google here, but at least they, um ... Hey, look -- a deer!"

Let me cut to the chase: If the people with whom I spoke shared any common thoughts -- any common culture -- it was 1) the near-universal questioning of Yahoo's acqui-hire strategy and 2) the desire for Yahoo to take on more substantive, moonshot engineering challenges. So to CFO Goldman's credit, my conversations "absolutely, very confidently" proved his point: They do hire a lot of smart people at Yahoo.

What's lost in the CFO's uber-positive spin is that Yahoo's biggest problem was never a lack of talent. It was, and perhaps still is, the lack of the kind of culture that retains great talent. And therein lies the problem with the company's metrics for evaluating success: Yahoo's 2013 annual report states that the number of people applying for jobs at the company doubled year over year, to more than 340,000. A better metric would be how many of Mayer's aqui-hires will have a tenure longer than V+1 or V+160. And given that Mayer's first acquisition, a company called Stamped, came aboard in October 2012, no one should

be able to evaluate that success until 18 months have passed.

Where are they now?

Stamped is the right test case. At the seven-minute mark of this Fortune interview with Mayer about her three biggest decisions as Yahoo CEO, she goes into the history of the deal. "Stamped was our first acquisition. A group of 10 people. Someone I'd known previously ... was running a great company. They were doing … 'Foursquare for things,' where you checked in and punched the things that you liked. Had a great run of it … a fair number of users but just really hadn't hit the tipping point that they wanted it to hit. And I said, 'You're a great group of 10 people. You know how to design mobile apps. You know how to build mobile apps.' Their app was beautifully designed. And I said, 'Would you mind ... you know, abandoning your app and coming here and working on something different?'"

Note that right after the words "abandoning your app" -- which is a profoundly sad statement -- Mayer flashes this quick smile that you should observe for yourself.

Mayer continued: "And you know that was a really hard decision for that team, but they ultimately decided that they would do it. They were like, 'We like working together. It is true that our application hasn't gone where it was supposed to go … but we're not going to be Facebook, Twitter, or Foursquare.' So they decided to stop what they were doing and came to Yahoo and built the mobile version of Yahoo Screen."

That last line blows me away. Yahoo took 10 creative, energized, super-talented risk-takers and asked them to port an online offering to mobile. And they paid through the nose for it: a damned port! It's the kind of coding and design that you can teach a kid out of school. That shouldn't just piss off the acqui-gineers. That should wake up the old-timers. And make the new new question their decision.

Talk about lacking imagination. It makes you wonder what Yahoo's version of the self-driving car would be. The self-conducting train? Or maybe the self-walking dog -- what the rest of us call "a dog."

Mockery aside, where is the Stamped team today? I found only three people on LinkedIn with Stamped in their profiles:

-- Robby Stein, co-founder and CEO of Stamped, is now the director of product management, Yahoo Mobile and Emerging Products.

-- Bart Stein, co-founder of Stamped, is now the co-founder and CEO of a stealth mode startup.

-- Paul Eastlund, VP of engineering at Stamped, left Yahoo in December and is working on something new.

Would Mayer or Goldman consider examples like those the solving of Yahoo's talent problem? Probably not.

Look, I get that most of what Goldman said was just him waving his pom-poms in a public forum. But with pom-poms that big, he might just as well have claimed that Mayer solved the P = NP problem.

Goldman and every Yahoo shareholder should be monitoring how long the talent from Mayer's 37 acquisitions remains at the company. Retention -- not just for her acqui-hires but for also every single Yahoo -- will be the strongest signal of the effectiveness of Mayer's ongoing (and incredibly difficult) cultural transformation. And the ultimate indicator of her success will be when, if ever, Yahoo lands on the Best Places to Work lists.

I doubt that Yahoo or any of the Big technology shops will ever stop acqui-hiring. That's fine, I suppose, not because of what it does for Yahoo shareholders but because of the signal it sends to the startup community. I'm not sure the entrepreneurial DNA cares about safety nets, but it's nice for the more-risk-averse engineers to know that one exists. Even if the process does cast and recast them as Bill Murray's character in Groundhog Day.

If the acqui-hire trend continues, though, we should create a new metric to replace the oft-used "cost per user" -- something like "cost per engineer." And companies should weight that cost by how hands-on the person is and then adjust it over time to reflect retention rates.

Mayer might also consider rethinking her moonshots to focus more on engineering goals. She has mentioned that she wants Yahoo "on every smartphone, every tablet, every day, for every Internet user." I don't know of any engineers who would get excited by that goal. Business people, yes. Analysts, absolutely. But engineers? Meh.

To quote one of the Yahoo employees I talked with -- and this sentiment came up over and over again: "They're hiring great people but not giving them projects that great people want to do." Mayer and every large tech employer need to light that fire. Because solving any big company's talent problem is only slightly less difficult than solving the P = NP problem.

For technology shops that care about attracting and retaining the best engineering talent, there's a direct correlation between those two challenges: Try to solve the impossible engineering problem and your top talent thanks you by staying.

The author, a senior IT executive at one of the nation's largest banks, shares his experiences under the pseudonym Coverlet Meshing. He has spent the last two decades in the financial services sector, picking a fight with anyone who doesn't understand that banks are actually ... View Full Bio
We welcome your comments on this topic on our social media channels, or [contact us directly] with questions about the site.
Comment  |
Email This  |
Print  |
RSS
More Insights
Webcasts
Making XDR Work in Your Enterprise - May 12
Multi-Cloud Data Management for Modern Applications
More Webcasts
White Papers
Global software company contracts with CBTS for Virtual CISO
Cisco Threat Response
More White Papers
Reports
The InformationWeek 2021 State of ITOps and SecOps Report
Dark Reading Report: Battle for the Endpoint
More Reports
Copyright © 2021 UBM Electronics, A UBM company, All rights reserved. Privacy Policy | Terms of Service