Karenann Terrell talks risk, job hopping, sponsors, and more. Are you developing the traits it takes to succeed?

Karenann Terrell has a passion for developing female IT leaders and encouraging young women to study science and math. As executive VP and CIO for Wal-Mart, she speaks to this topic from a high-profile position, but with a level of candor and practicality that's unusual among C-suite executives, male or female. When I moderated a panel she was on earlier this year at the Michigan Council of Women in Technology, Terrell looked out at the room of 500 people and delivered this message: I am a woman. That will never change.

For women who have been told for years to downplay their gender, it's invigorating to hear Terrell say that.

She's not all talk. At Wal-Mart, Terrell leads circles of 20 or so women who get together regularly to learn from each other and achieve better results for the business as they find new mentors and allies. She encourages young women to study the STEM subjects. And behind the scenes, she sponsors rising IT leaders in her own organization. Developing female IT leaders isn't just the right thing to do, it's also the commercially prudent thing to do given today's tight IT labor market, she says.

Terrell spoke with me recently about the IT career lessons she has learned, the traits she looks for in rising IT leaders, and what her organization has learned about developing and retaining those leaders.

InformationWeek: What do you wish you had learned earlier in your career as an IT leader?

Terrell: To take more risk. Practice taking risk as early as possible: The stakes are much lower, but you don’t realize it. It teaches you to fail gracefully and develop an instinct, an intuition.

I learned later to take risks in terms of moving, projects, and innovation, but probably not until the 20-year mark in my career.

InformationWeek: What are the most important traits you see in women climbing the IT career ladder, possibly to CIO positions?

Terrell: There is a directness and candor in their communications, which usually comes out of being able to be succinct. They're not brutal, not overly direct. They have a way of being candid yet disarming. Sometimes, it's combined with humor.

They always have had a significant diversity of experience. That makes them more nimble. This allows them to be more effective when unknown things come at them. [That diversity includes having served in multiple job functions, such as engineering and finance, or in various geographies, Terrell added.]

They have a depth of experience in something vertically, in an area of technology, that they can reach into…. I've never seen fast-moving women who were jacks of all trades and masters of none.

InformationWeek: Do some women take too long to decide to pursue a fresh role?

Terrell: In general, yes. But if they are well counseled and mentored, someone else is saying, "Of course you're ready." Women want to have that impact of value in the current role… and prove it. I have to push women a lot more frequently when I'm talking to them about the next role.

I was exactly like that. It was "one more year in this and I'm going to get another gold star for my experience vest."

InformationWeek: How important is it to have not just a mentor, but a sponsor, and why?

Terrell: A mentor is somebody who stays with you over a long time. You have that trusting investment in each other.

The sponsor is key for any talent to have. They will speak on your behalf in a compelling way. There's no messiness. A sponsor doesn’t worry about being second-guessed. Their credibility in their peer group is a really powerful counter-effect on subliminal bias in an organization. The sponsor can say "Why can’t she?"

[A mentor may be assigned to you, Terrell added, but you want a sponsor to volunteer. The sponsor puts you forward for a new responsibility because it will be good for the business, without the personal strings that a mentor would carry.] 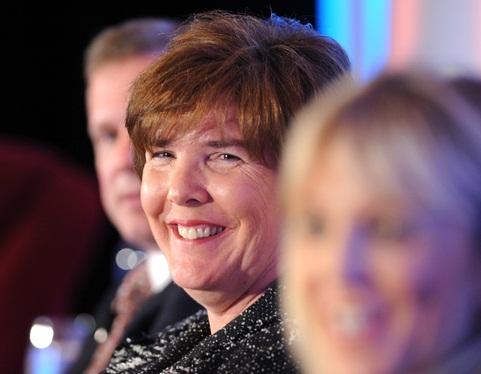 InformationWeek: How do you develop female IT leaders in your organization? What is value of the "mentoring circle" approach?

Terrell: In our culture, with the grass roots of being able to speak out on any topic, a mentoring circle lets people come together. I select them to come together. What I find is in 90 minutes, I am speaking for 10, maybe 15 minutes. It's so much about them speaking to each other.

I'm not sure that group would ever come together. A vast majority of them would say they don’t know each other.

[So how do the women land in the circles?] They wanted mentoring from me, Terrell said.

InformationWeek: Have you had any eureka! moments come out of the mentoring circles?

Terrell: Because of the diversity, our "eureka" was a discussion about women of color… and how if white women won’t speak up for women of color, the likelihood of things getting better is low.

The second is, if we're all going to persist here. It's going to take us all being able to lean in and lean on each other.

[In other words, Terrell said, the women learned to call each other and ask for help. They became a real cohort.]

InformationWeek: You've said there are two times when the numbers of young women studying science and math drop dramatically: around the eighth grade, when bullying kicks in, and then from freshman year through senior year of college. What can universities do to encourage female IT students to stick with STEM?

Terrell: The data shows that women don't drop out of university; they drop out of STEM. The underlying reasons have to do with curriculums that weed people out as soon as possible.

Either there must be much more focus on support instead of "they want me out, I'll get out," or there must be some type of a rethink on this weed-out system. That's pretty institutional, but it's scaring people out of the curriculum.

What we have realized here [at Wal-Mart] is to establish, as early as possible, these network-based cohorts of women. Sometimes you find it in sororities. But sororities aren't all women in STEM. Universities could do that along STEM lines.

Here, we all hang together. If you could repeat that in the university, there might be some magic there.