We're improving the odds that you'll meet peers who are dealing with the same problems you face.

We're borrowing from the speed dating idea to try something new at this year's InformationWeek Conference: speed networking for CIOs and other IT leaders.

Unlike speed dating, the goal isn't romance. It's helping you meet professional peers who have the same problems you do, and hopefully some better answers.

We've set aside one hour for speed networking on the first day of our Conference, which is April 27 and 28 in Las Vegas. Here's how it will work:

2. We'll match you up with a CIO, a VP of IT, or a similar peer executive with the same interest. You have about eight minutes to discuss your problems or initiatives and how you're tackling them. You can swap contact information to follow up later, or to connect members of your respective teams.

3. When time's up, our facilitators (we've hired pros to make this run smoothly) will guide you to your next networking connection. You'll have the chance to connect with up to six of your peers in an hour.

4. After the speed networking hour ends, we have an informal social hour (yes, the bar's open) where you can catch up with the people with whom you wanted to dig deeper. Plus, you'll have all day Tuesday at the Conference to talk more, at our breakfast, lunch, and multiple informal networking breaks.

I was discussing our speed networking plan with Toromont Industries CIO Michael Cuddy, a frequent Conference attendee and a member of the InformationWeek editorial advisory board. He mentioned how networking at a past Conference led to his current mobile application security architecture. At one of our informal networking sessions, others talked about having the same mobile app security issue. They explored options and ideas, and that led to his investing in a platform that is proving very effective.

We want more of that -- and since you're all results-oriented folks, we want to make these interactions a bit less serendipitous, and a bit more dependable. And that led to speed networking this year. 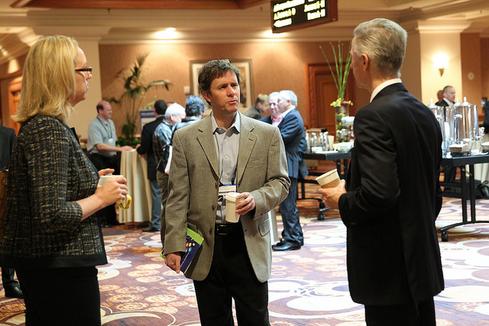 Plenty of informal networking, too.

The InformationWeek Conference is 100% about executive-level peer learning. Some of that learning happens on the main stage. We'll have Walmart CIO Karenann Terrell and AstraZeneca CIO David Smoley, for example, discussing how they're transforming IT in different ways for their very different organizations. We'll have a session where leaders from Pinterest and Allstate discuss software development strategy, exploring how both born-on-the-Web and established companies can and must innovate in software.

But we know some of the best learning at our Conference happens when a healthcare CIO talks with a manufacturing VP, and they realize they're trying to solve a very similar analytics problem.

This year, we're raising the odds on getting those sparks to fly. We hope you'll join us at the Conference.

Are you an IT leader considering attending the InformationWeek Conference? You can Email Me with questions, or register now and save $200 off  InformationWeek Conference passes with discount code CMBLOG. Other speakers include the CIOs of the NBA, ConocoPhillips, Royal Caribbean, and more, along with 3D Robotics CEO Chris Anderson, discussing drones and the future of automation.

Chris Murphy is editor of InformationWeek and co-chair of the InformationWeek Conference. He has been covering technology leadership and CIO strategy issues for InformationWeek since 1999. Before that, he was editor of the Budapest Business Journal, a business newspaper in ... View Full Bio
We welcome your comments on this topic on our social media channels, or [contact us directly] with questions about the site.
Comment  |
Email This  |
Print  |
RSS
More Insights
Webcasts
Nip Ransomware in the FUD: Detecting Attacks Pre-Encryption
Cybersecurity's Next Wave: What You Should Know
More Webcasts
White Papers
Why Add Security to Your Skill Set and How to Do It
Enabling Enterprise Resiliency Through Cyberthreat Detection
More White Papers
Reports
The Malware Threat Landscape
How IT Security Organizations are Attacking the Cybersecurity Problem
More Reports

All charge. Looking forward to the speed networking. Get. Set. Network.
Reply  |  Post Message  |  Messages List  |  Start a Board

Great idea! The part I've disliked most about networking is starting that conversation during those informal times because sometimes you find you don't have anything to talk about. Setting up 'speed date' sytle networking opportunites can help those of us that don't thrive in the networking arena and need a little bit of help getting it off the ground.
Reply  |  Post Message  |  Messages List  |  Start a Board

This is a great concept.  I'm on the East coast so this doesn't work for me but I can see the value in getting some people together how would otherwise be unlikely to cross paths and let them talk tech.  I think the most powerful part would be the after session communication, this should be a valuable asset to anyone in a CIO or IT leadership role.
Reply  |  Post Message  |  Messages List  |  Start a Board
Editors' Choice
Hot Topics