Satya Nadella has the brains and experience to become Microsoft's CEO -- but does he have the sharp tongue of Gates or Ballmer? Match these Microsoft CEO quotes to their outspoken owners.

Microsoft's new CEO Satya Nadella has some big shoes to fill. He faces great expectations when it comes to innovation and profit, his predecessors set the bar very high, yada yada yada... But that's not what I'm talking about.

Microsoft's new leader will play follow-up to two of the most prolifically quotable CEOs in history. Nadella, displaying a fondness for cricket, a formidable intellect, and a borderline-hipster wardrobe, is already carving out an identity. But he has nothing on the cult of personality that formed around Gates. When a satirical website claimed the Microsoft founder told a reporter, "I give you a million bucks, and I get to sever your arm right here," and "Let's face it, the average computer user has the brain of a spider monkey," many perceived the statements as fact -- in fact, some wounded PC users were still lamenting the faux comments years later.

Nadella's public persona can't compare to Ballmer's, either -- at least not until the new boss has had a chance, as Ballmer did on several occasions, to spit on an Apple product that subsequently goes on to redefine the industry. No, in terms of headline-grabbing outlandishness, Nadella is still a rookie among wizards. 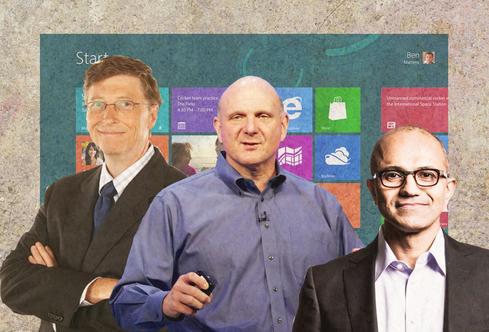 Need a refresher on Gates's and Ballmer's most outrageous and insightful statements? Take our quiz, which features 12 zingers from not only Microsoft's first two CEOs, but also Nadella, who's already offered a few noteworthy statements as he's risen through the ranks. The answers are on the next page (no peeking.)

When you're done, use the comments section to write in your vote for the wackiest tech CEO quote of all time. It might be one of these -- or one from an even more colorful character. We will report back on the write-in winner. Do bring your sense of humor; just keep it safe for work.

Now put your Microsoft cred on the line. Which Microsoft CEO said:

1. "Your most unhappy customers are your greatest source of learning."

2. "Our industry does not respect tradition -- it only respects innovation."

3. "Linux is a cancer that attaches itself in an intellectual property sense to everything it touches. That's the way that the license works."

4. "You might hear me say 'That's the dumbest idea I have ever heard' many times during a meeting."

6. "About three million computers get sold every year in China, but people don't pay for the software. Someday they will, though. As long as they are going to steal it, we want them to steal ours. They'll get sort of addicted, and then we'll somehow figure out how to collect sometime in the next decade."

8. "They yell at you, they'll scream at you, they'll sort of say you're crazy and you're destroying this place. And all the melodrama aside, you come back at it with the data, with the -- with your own conviction, because a lot of that stuff is all to test whether you know what you're talking about."

9. "What is it about sarcasm in a meeting? Or just going, 'This is completely screwed up'?"

10. "There's no chance that the iPhone is going to get any significant market share. No chance. It's a $500 subsidized item."

12. "Now people are saying, 'Hey, where did you come from? You guys were getting your ass kicked by VMware.' "

Wow! (We resisted any mention of cream pies or developer dances.) See page 2 for the answers...

When did the smiley start to be used? :/  I never use the winking smiley because it never seems to fit anything I say. As you say, what does it suppose to suggest? :/

However, as you see, I am very fond of using some others. :D Although I agree with you that it's quite annoying to receive a "J" on a Mac when the smiley comes from a PC. That's not the only incompatible thing between the two systems, anyway. ◔_◔

A smiley also expresses people's opinion. They are fun and can set a good mood in the conversation. :)

"Why stop at like / dislike though? Some forums allow you to rate using a bit more opinion, like "Funny" or "Sad". I actually quite like that."

What about using smileys instead? I prefer smileys. :D

"And sometimes 'dislike' represents your agreement that you dislike something that happened to somebody (for example)."

Yes, I see your point. The sad smiley is used in that case. It's also more expressive than a simple Dislike button, don't you think? :)

""A squirrel dying in front of your house may be more relevant to your interests right now than people dying in Africa." -- Mark Zuckerberg, early in his journey to figuring out how to be a public figure"

Or, at least this is how it should be and there is nothing wrong about this.

The proximity of the problem affects you more than the magnitude of it.

I believe the Like button's function is to highlight positive feedback, positive opinion. No one in this world needs more negativity online. More than half of the daily news is just enough of that.

"Imagine a world where every online store sells DRM-free music encoded in open licensable formats. In such a world, any player can play music purchased from any store, and any store can sell music which is playable on all players. This is clearly the best alternative for consumers, and Apple would embrace it in a heartbeat."

>"A squirrel dying in front of your house may be more relevant to your interests right now than people dying in Africa." -- Mark Zuckerberg, early in his journey to figuring out how to be a public figure

This explains why we have a Like button but no Dislike button. Advertising only works when the backdrop is banal.
Reply  |  Post Message  |  Messages List  |  Start a Board

Bill Gates on the Chinese: "As long as they're going to steal it, we want them to steal ours." This is as close as Microsoft ever got to endorsing free software concepts.
Reply  |  Post Message  |  Messages List  |  Start a Board

"A squirrel dying in front of your house may be more relevant to your interests right now than people dying in Africa."

-- Mark Zuckerberg, early in his journey to figuring out how to be a public figure
Reply  |  Post Message  |  Messages List  |  Start a Board

Don't be shy. Write-in favorite will get some shiny InformationWeek gear.
Reply  |  Post Message  |  Messages List  |  Start a Board