Modern customers demand constant connectivity. In fact, they expect it -- even on a cruise ship floating in the middle of the ocean.

The typical Internet capacity on cruise ships is about 1-2 Mbps, a speed that makes it "worse than dial-up," Martin noted, when spread among 3,000 guests. Royal Caribbean needed to broaden its capacity in order to give customers the connectivity they wanted at a reasonable price. 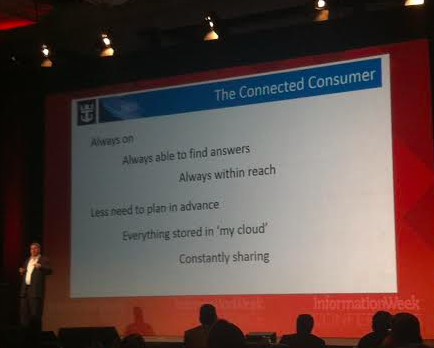 It found a solution to improve Internet capacity through a partnership with O3b, which brings high-speed Internet to people without online access. O3b uses satellites that orbit closer to Earth, which have proven instrumental to Royal Caribbean's strategy. The cruise line found that it could offer customers Internet capacity 300 times greater, and six times faster, than its previous limit.

To test its new connectivity, Royal Caribbean conducted an experiment. For one month, it allowed customers and crew free Internet access without restrictions placed on usage or number of devices. More than 5,000 devices were connected during that time.

It found that customers primarily used their connectivity for streaming media, which was followed closely by usage of top social media sites Facebook, Twitter, Instagram, and Pinterest. Traffic increased 450 times to those four platforms, said Martin, and millions of high-resolution photos were shared per week.

You are absolutely right to suggest that "Security is definitely a Huge Issue".

At the sametime I have little doubt that is the usual case/issue in most sceanarios like this one;Security will be an after-thought in the entire Scheme of things and only when a Real Breach/Disaster happens will Security be Bolted onto the Enterprise.

As I had said earlier also,Most Consumers don't want "Slow Internet" or Internet with too many Gates.

For reference case-Just observe  how United Airlines Hamfisted response to a Security Researcher who claimed that their Flight Control Systems could be easily Hacked-www.bbc.com/news/technology-32380071

Would'nt it be so much better if they would very nicely have asked Mr Roberts for a demonstration of what he Claims to be possible[In a safe passenger-free environment] before dismissing his claims entirely???

I hope you appreciate and understand what I am suggesting here.

Jonathan, are you serious? $100 per day?! WiFi has been provided by all the cruise companies in northern Europe and the Baltic states for years now and at no cost. Many times I have worked from a cruise ship and got free WiFi, and it's very fast. Royal Caribbean is just catching up, with the difference that they are charging for a service that is provided for free by others. -Susan
Reply  |  Post Message  |  Messages List  |  Start a Board