21 comments
Comment Now
Superheroes, Dr. Who bars, video games, Seth Meyers, and more. Check out some of the coolest things a geek can see while in New York for Interop. 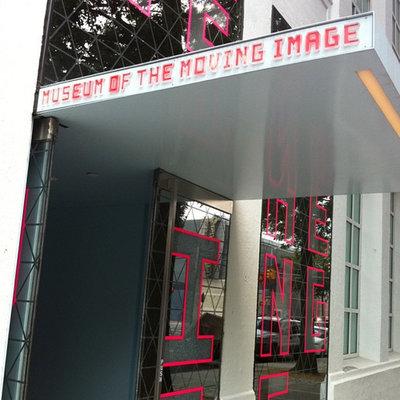 Flicks
Even though Hollywood is the center of the filmmaking universe, New York plays a close second. The radio and television industry history here is undeniable. You can't walk a block without seeing something Woody Allen filmed in black and white or a building where a couple fell in (or out of) love or an alien was destroyed in a summer blockbuster. But to see it all in one day, check out two amazing museums: the Paley Center for Media and the Museum of the Moving Image (pictured).

Both museums house fine collections of video ranging from classic TV and movies to the modern day. The Museum of the Moving Image is running an exhibit on Looney Tunes (among others) artist Chuck Jones and will soon house donated Muppets from the Jim Henson family, including Kermit, Miss Piggy, and the Swedish Chef. Paley and the Museum of the Moving Image are constantly screening, but their Interop schedules aren't out. But just to give you a taste of what to expect, this summer Paley offered an eclectic array of TV -- from a tribute to Monty Python to a World War I news reel marathon to a set of Fashion Week archives from the Mad Men era. Every September, Paley previews the pilots of upcoming TV shows before they debut on major networks. Go to either great museum to get your flick on.

@Brian_Dean: I have put the 3D printing store on my Interop itinerary. I expect that we will see our lives completely transformed by this technology, the only question is: When?
Reply  |  Post Message  |  Messages List  |  Start a Board

@Dave: I have a picture of my Mother In Law with The Naked Cowboy in Times Square. It is truly priceless to me.
Reply  |  Post Message  |  Messages List  |  Start a Board

I'm going to have to go for drinks at the Dr. who theme bar once I get back to NYC. I'm not surethough if I can let my family in thee forbidden planet. I may never get them out again 9without the lure of a tradis at any rate.) Thanks for the geekery I can add to my next trip.
Reply  |  Post Message  |  Messages List  |  Start a Board

So many things I haven't heard of...can't wait to visit some of these spots in October!
Reply  |  Post Message  |  Messages List  |  Start a Board

Dave thanks for all the great suggestions some were new to me and I am a native New Yorker! I need to visit the 3D prinitng store!

BTW Elmo would be your safest option these days in Times Square,on my last visit there was a woman in front of Toys R Us who wore only painted clothes. A little difficult to explain to a child  going into the Disney store or Toys R Us.
Reply  |  Post Message  |  Messages List  |  Start a Board

If my past convention experience is anything to go by, most people will find they have the energy to do little else  after they attend the convention. I haven't been to an Interop, so maybe it's a little better run, but I'm used to the checking in, venue navigation and waiting in lines taking about as much time as the convention itself... which is surprisingly exhausting. We have the Penny Arcade Expo every year here in Boston, and while I live here (so I'm in no hurry to see the sights), the companies that run the show host all kinds of cool concerts, premiers, and bar crawls over the convention weekend... and let me tell you, I've never been to one. Hopefully the Interop attendees will have a little more energy than me, because this is a great list.

I suppose it's no surprise that New York has one of everything (including a superhero supply store). In fact, as you point out, it has two of many of these things, which is exactly why you need someone to point you in the right direction. Since you mentioned video games in the description, I would've liked to have seen Next Level make the cut (though I suppose it's not really a tourist attraction). If you're into competitive games, it's where some of the best players in the US duke it out in the modern (and classic) iterations of Street Fighter, Mortal Kombat, and Tekken week after week. It doesn't look like their calendar is set for the week of Interop either, but there's usually something going on.
Reply  |  Post Message  |  Messages List  |  Start a Board

I'm less sure about printing medicines, at least in my lifetime, because of what you'd need for the "ink." It's possible at some point, but I don't think it would be cost-effective (although if it's for illegal drug usage, than there always seems to be someone around to pay the price asked!). But for legitimate users, I would think it'd be far more expensive to have all the chemicals on-hand necessary to print up your newest prescription...
Reply  |  Post Message  |  Messages List  |  Start a Board

I don't get the "characters" in Times Square either- and I am referring to the ones that are dressed in costumes. Love the pigeon/skyline photo! I hope to make Interop in NY this year, I am really looking forward to it.
Reply  |  Post Message  |  Messages List  |  Start a Board

I've never understood the economy around getting your picture taken with a non-famous person in a ranted costume in front of a landmark. It happens in NYC, Vegas, and Hollywood, and it is starting to spread to more cities. I mean, I vaguely get it in Disneyworld because at least it is "official" that the character is attached to the landmark.

But what are you getting out of getting your picture taken in Times Square next to a dude in an Elmo costume?
Reply  |  Post Message  |  Messages List  |  Start a Board

@Alison- Do you think people will ever "print" their pills? I've always thought one of the more controversial uses of the 3-D printer in the future would be 3-D printed medicine with and without a prescription. Imagine people self-diagnosing themselves with some disease, deciding it wasn't worth going to the doctor for it, and finding some pirate file of the medicine for it and "printing" it for themselves.

That seems like a total disaster but entirely plausible.

And that doesn't even include street drugs and other issues. If people got upset up a 3-D printed gun just wait until this happens.
Reply  |  Post Message  |  Messages List  |  Start a Board
Page 1 / 3   >   >>
Editors' Choice
Hot Topics