In a panel discussion moderated by Elizabeth Ames of the Anita Borg Institute, the three CIOs shared their current IT initiatives, plans on the horizon, common technology challenges, leadership tactics, and the ways they are recruiting and welcoming the incoming generation of employees. Here's what we learned.

10 Trailblazing Companies For Women In IT
(Click image for larger view and slideshow.)

It's rare to find a female CIO. It's especially rare to find three female CIOs from major corporations like Ford Motors, Pricewaterhousecoopers, and Starwood Hotels in one place.

These women are leaders in their fields, and represent the strikingly small number of female IT leaders. A mere 84 women hold CIO roles at Fortune 500 companies, only 17.4% of the total employed, according to the panel's printed handout.

In a discussion moderated by Elizabeth Ames of the Anita Borg Institute, the three CIOs shared their current IT initiatives, plans on the horizon, common technology challenges, leadership tactics, and the ways they are recruiting and welcoming the incoming generation of employees.

While the three panelists represent different industries, they shared common perspectives. All agreed the role of the CIO, and the roles of technology and innovation within their respective businesses, are constantly changing.

For Ford's Klevorn, a key part of her job is "viewing our industry as a tech industry, and our company as a tech company."

Back in January, Ford acknowledged the evolving role of cars' communication technology with the opening of a Silicon Valley research center. Half of the center's workers are IT employees, said Klevorn, and there's a constant focus on changing how people interact with their vehicles.

Klevorn's approach to innovation is partially influenced by her business acumen, which she said has proven advantageous in her role as CIO.

"You have to have a hand in both places," she said of today's IT leaders, who have to be strategic and innovative, in addition to possessing technological expertise. "Everything we do -- whether in our fields or outside our fields -- has a huge tech component."

Sufficient experience, whether through formal education or on-the-job training, is critical for CIOs. "You can't be a chef without ever having cooked," noted Starwood's Poulter. Future IT leaders can't fill a senior position without knowing firsthand how networking works or how data influences outcomes.

As the role of the CIO continues to change, so too do the means of recruiting and retaining a younger workforce.

Poulter described how Starwood recruited its intern class by holding a coding competition, something the company had never previously done. This turned out to be a hugely effective strategy and "a much better screening process" than traditional hiring methods, she said.

PwC's Zarmi noted the importance of reaching out to young employees in a way that touches on the things they care about, like being provided with the right tools to work on digitally connected teams. The firm, where the average employee is 27 years old, is in the process of implementing Google at Work. 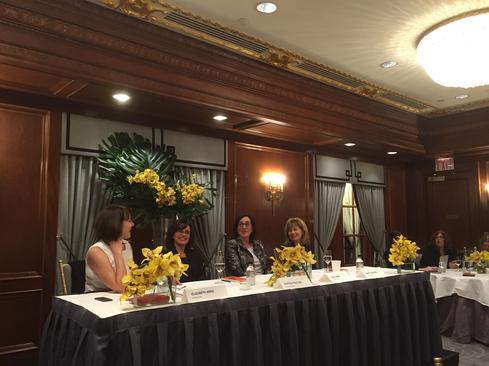 "They are expecting a different set of tools anywhere they work," she said of PwC's relatively young workforce, which seeks a collaborative and interactive environment. "They don't want to work in the same way people used to work five to ten years ago."

Ford has altered seating arrangements to create a more open and collaborative workspace, and has implemented programs to help new employees feel valued. When Ford executives were given iPads, recent college graduates were paired with execs so they could set up the new devices. The project formed relationships between grads and execs, Klevorn said.

Looking towards the future, all panelists voiced their excitement over how technology will continue to evolve and regarding plans for the ways their companies will keep up.

"Innovation needs to be a continual process," said Poulter, noting the importance of an engaged employee base. "We need every idea. Everyone's in the game; everyone's thinking." For example, Starwood holds innovation days and hackathons to keep ideas flowing.

Miniaturization is something she said she has her eye on, specifically in regards to customer service at Starwood's hotels. Smartwatches and sensors can give the company data in forms it's never been able to capture until now, she explained, and that can be used to help make properties "smarter," and to serve customer needs better.

Zarmi said she looks towards the future of artificial intelligence and the Internet of Things. "[They] have the potential to completely change the world," as the Internet did.

Klevorn cited the evolution of contextual learning and cognitive technology, both of which can eventually be leveraged to learn more about customers. She noted that Ford is "just scratching the surface" of how those technologies can be used to tie together the user experience.

Kelly Sheridan is the Staff Editor at Dark Reading, where she focuses on cybersecurity news and analysis. She is a business technology journalist who previously reported for InformationWeek, where she covered Microsoft, and Insurance & Technology, where she covered financial ... View Full Bio
We welcome your comments on this topic on our social media channels, or [contact us directly] with questions about the site.
Comment  |
Email This  |
Print  |
RSS
More Insights
Webcasts
Making XDR Work in Your Enterprise - May 12
How the Rapid Shift to Remote Work Impacted IT Complexity and Post-Pandemic Security Priorities
More Webcasts
White Papers
Enabling Enterprise Resiliency Through Cyberthreat Detection
Cisco Secure Email
More White Papers
Reports
2021 Application Security Statistics Report Vol.2
Enabling Enterprise Resiliency Through Cyberthreat Detection
More Reports