Customers in the Open Networking Foundation beg to differ with the Cisco CEO's assertion that advanced networking "can't be done in software."

If you haven't read Rob Preston's interview with John Chambers, I highly recommend it to you. But before you read it, consider a few words from someone who has "interviewed" the Cisco CEO several times over the course of 15 years or so.

First, let me note that my last interview of Chambers was six or seven years ago. A small group of us from InformationWeek had been summoned to an audience. After the usual pleasantries, we got down to it. We'd ask a question, and Chambers would say a few words on the subject -- literally about five -- and then pivot into a 10-minute discussion of something completely unrelated. We'd ask another question, which was again greeted with a quick pivot into another long monolog on some other topic. This went on for about 45 minutes.

I came away scratching my head, at a loss for what to write. Chambers has always been a CEO who's "on message," but this was something new. Ask about Fast Ethernet, get an answer about routing evolution. Strange.

A few weeks after that interview, I was sitting at an event where Chambers was the featured speaker. The speech he gave was the series of monologs he had delivered to us. He'd had no interest in answering our questions; what he needed was a test audience for this address. It all finally made sense.

Chambers is something of an exception among the mover-and-shaker IT vendor CEOs, especially among the ones who've lasted more than a decade. He's a sales guy who rose through the ranks. A former IBM and then Wang salesman, Chambers joined Cisco in 1991 as senior VP of worldwide sales and rose to the CEO job in 1995. In an industry where founders and sometimes product strategists have headed many of the biggest companies (Gates, Ellison, Plattner, McNealy, Page/Brin, Bezos, Benioff), Chambers' pedigree is different. He's polished and rehearsed, much more than those founder CEOs ever thought they had to be.

Bill Gates would listen to your question, and in his geeky way would stall for a bit of time before answering with a sheepish grin and a long "well..." as he formulated his answer. Sun co-founder Scott McNealy, a hockey player at heart, would get heated over certain questions even as he dropped soundbites into his responses. I interviewed Eric Schmidt in his early days at Sun and got a few raised-voice answers. A more introspective Schmidt at Novell took his time and gave real answers. 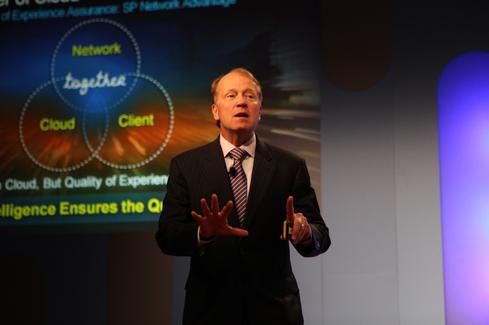 Chambers: An exception among the mover-and-shaker IT vendor CEOs

Chambers isn't that way. Like a junior politician, he's anticipated every question you might have. His mind is lightning quick, and his answers take no thought time. He talks fast, and the faster he talks, the more anticipated the question was. If you push things, his normally cheery disposition breaks just long enough to tell you to drop it -- he's answered your question.

What you're left with is an exercise in squaring what he says with the reality you know. That's always what you do with salesmen and politicians. Chambers' challenge is that he must constantly speak to two audiences. He has to address his customers, who want reliability, performance, affordability, and interoperability; and investors, who worry about commoditized hardware gutting Cisco's stellar profit margins. Promise too much to the investors, and his sales team will get bombarded with hard questions. Too much for the customers and Cisco's stock will take a spanking.

Chambers told Preston: "There will be a battle... in terms of people pushing the white label approach or people who push an SDN overlay... We have 25,000 software engineers. If this could be done in software we would have already done it."

There's a lot to unpack there. First, I can't tell if he's purposefully using the word overlay as room to wiggle, or if he's just saying that SDN on generic hardware is a nonstarter. Probably both. Second, the Open Networking Foundation was started by Deutsche Telekom, Facebook, Google, Microsoft, Verizon, and Yahoo. They obviously think SDN on generic hardware can be done, but if it were left to the usual efforts of the vendors, they'd get just one more anemic standard that indeed couldn't get the job done.

If Google can make its own networking hardware, as Preston noted in the interview, chances are a whitebox approach will work for anyone -- provided the standards are there and adhered to and the right software companies emerge. For a man who constantly says that Cisco's main job is to listen to its customers, he sure isn't listening to this group.

Preston went on to ask about the virtualization effect that has commoditized servers and is beginning to do the same to storage. Chambers' answer: "... storage and servers ... were underutilized." So the reason you can't virtualize networking is that it's too heavily used. If you turn the clock back, you'd have heard the same thing about mainframes. I heard the same reasoning from minicomputer vendors, and then from proprietary Unix vendors: The hardware and software had to come from the same company, they said. Linux and Windows were just too unreliable and you could never run them at peak performance.

Of course, that's true when you've overpaid for the hardware-software combination. Customers must get every ounce of use out of their purchase; they shot their budget on it.

It's true that Cisco's 25,000 software engineers probably couldn't make a workable SDN system a decade ago. But a decade from now we'll think of the proprietary networking days as quaint. The question isn't if, but when. Cisco's customers know it and its investors know it.

The question for Cisco is: Would it prefer to be a dead hardware company (like DEC and Wang and a dozen others) or a thriving software and services company (like IBM)? Chambers watchers will wait for the big pivot.

Battle lines are forming behind hardware-centric and virtual approaches to software-defined networking. We size up strengths and weaknesses. Also in the SDN Skirmish issue of InformationWeek: Anonymity has a role in business communities. (Free registration required.)

Not only is Chambers trying to please customers and shareholders at the same time, he is leading a hardware company that is trying to own a market that is becoming "software-defined." I think that is the biggest challenge. No matter how you slice it, that equates to quite a bit of double-speak.
Reply  |  Post Message  |  Messages List  |  Start a Board

The author boils down Cisco's challenge when he writes that Chambers must constantly speak to two audiences: customers who demand reliability, performance, affordability, and interoperability, and investors who demand fat profit margins. Other tech vendor CEOs must balance those two sets of constituents, of course, but it seems that Chambers has to do it more than most. Financial markets move based on what Chambers says.
Reply  |  Post Message  |  Messages List  |  Start a Board

"We have 25,000 software engineers. If this could be done in software we would have already done it."

Faulty logic - it's not the volume of people, it's the talent, and the strong leadership direction that make for a great product. Seems like that lack of a defined path is a big part of the problem here -- you can't have huge profits based on proprietary hooks AND embrace a scale-out, standards-compliant future.
Reply  |  Post Message  |  Messages List  |  Start a Board
Editors' Choice
Hot Topics