Career Advice From The Future - InformationWeek

How to start a revolution at work by flattening the org, taking part in hackathons, and listening to rap music.

There's no hope for change after 30.

That's my completely scientific conclusion after compiling the chart below, which shows the number of Google search results for "letter to my (n)-year-old self." 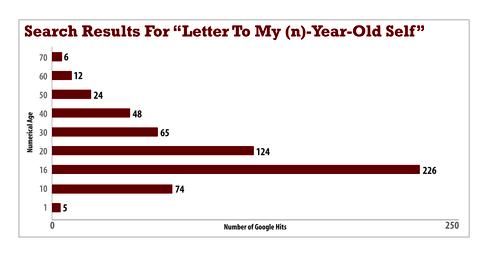 The takeaway: Any letter that you write to your 30-year-old self should refrain from sage advice and simply list winning lottery numbers.

Middle management is a ring of hell
You're stuck there right now. And oddly, you're enjoying it. Don't get comfortable. Your long-term goal shouldn't be to retire to senior management but to flatten the org.

That's a tough goal if all you have is middle management's "soft power." No autonomy. No ability to make the executive decisions. Poor wittle you. You still haven't figured out that middle management is a tiny evolutionary hop from the roles played by our fathers' secretaries. If senior management had the stomachs for it, they'd call you executive assistants. Not an assistant manager, but an assistant to the manager.

Thank God you still think you're 20. You have a healthy disrespect for authority. You understand that operating with autonomy is a choice, your choice, and not a gift from your boss. And that understanding is the secret key to the executive washroom. It'll be yours soon.

Be careful, though, because the higher you get in an organizational hierarchy, the more ambivalent you get toward the benefits of position in that hierarchy. That's why executives have better health and eye plans. They suffer from shortsighted, self-serving myopia.

Sadly, your peers in middle management don't understand any of this. Or if they do, they keep passing the alcoholic the drink.

The good news is that even talking about flattening the org will force them to question their own value. Why have a layer between senior management and the frontline? Couldn't they turn top-line strategy into action? Couldn't they manage the day-to-day?

Despite what senior management wants everyone to believe, setting top-line strategy isn't a full-time job.

Hell, it's not even a part-time job. You know what is a full-time job? Challenging the current power structure. Do it. Not because that'll get you into an executive role (it definitely will), but because it's principled dissent.

Disrupt your whole layer out of their comfort zones and eventually out of their jobs. That last part sounds mean, but don't worry about what all those middle managers will do next. All the people you've known who have left the company have landed on their feet. And quickly. Most of them wonder what you're still doing there.

You should wonder that, too.

Corporate lifers -- especially in IT -- make all kinds of false assumptions about their own employability. From the outside they look like people trapped in an abusive relationship. "Oh, he loves me. He has a good heart. He's better than this."

But it's not about him. It's about you and how you fail to see that you deserve better. You stay at your current employer partly because it's convenient, but mostly because you don't understand how much you're worth. The trick is to realize how much but stay humble. And no, you still haven't figured out that piece of the puzzle. It'll probably be a deathbed revelation.

Senior management is asleep
Don't wake them. They look so peaceful.

Use all the quiet time to do their job. Create a meaningful, business-problem-driven context for collaboration, learning, playfulness, and gamesmanship. You still have a year before the term "hackathon" is coined by the good folks at OpenBSD (1999). So now's a good time to rob them of that mention in Wikipedia. Muahahaha. Cough.

Ten years from now, you'll (finally) realize that hackathons are the perfect vehicle for transforming Big. They're Abbie Hoffman: countercultural, seriously rebellious but with a sense of humor. If you don't get that reference, because Hoffman died in 1989, here's something more recent. Hackathons are the engineering equivalent of that anonymous man who stood, one shopping bag in each hand, in front of the tanks in Tiananmen Square.

They reverse the marginalization of engineering, energizing the real talent in the org by reminding them of why they chose to be engineers in the first place. They let IT groups demonstrate that we've been paying attention over the last few years and understand the business better than the business does.

Hackathons demonstrate the benefits of inclusion and ownership by showing how quickly even the most complex ideas can become beautiful working code when the ideation doesn't (always) happen somewhere else. They broaden the definition of diversity by showing how much better xyz product can be when you don't just throw xyz-skilled people at it.

And they build credibility with your business partners around the speed and cost of IT. Once you have the business distracted with the cool output, you can sneak in the longer-term foundational investments that the empty suits will never fund.

Best of all, hackathons let you shoot for the moon, which is insanely fun. They set goals so high that failure still gets you into orbit. If nothing else, you'll validate what you've known forever: that business-as-usual BRDs have all the charm (and challenge) of highway hypnosis.

Speaking of which, be careful because when senior management finally wakes up, they'll probably learn the wrong lessons from the hackathons. They'll see the success and excitement and suggest a soulless alternative. They'll recommend that the business determine the agenda of the next one, which is essentially the same as saying, "Let's not change anything whatsoever. But work faster."

They'll hand each developer two shopping bags and force them at gunpoint to go stand in front of tanks.

I'm glad to see more people pushing for new ways of doing things.  This is just like the movement to DevOps, flatten the hierarchy, remove the politics and processes that kill any chance of momentum.  This has never been more true than now with the speed that cloud has added to the way we do things. Sure the executive leadership teams were good at building up companies, but as we all know, these old ways of doing things are just not effective when it comes to driving innovation.

Not sure about the rap music thing, if you ask me, the IT industry is powered by electro.
Reply  |  Post Message  |  Messages List  |  Start a Board

The middle finger of methodologies. Coverlet, you rock. Keep them coming.
Reply  |  Post Message  |  Messages List  |  Start a Board

All I kept thinking at the middle manager introduction was:

Look at you: member of the honor roll, assistant to the assistant manager of the movie theater. I'm tellin' ya, Rat, if this girl can't smell your qualifications, then who needs her, right?

On a more on-topic note, dealing with management structures makes me glad I'm a freelancer.

there's a great book I'm reading at the minute by Euan Semple called Organisations don't Tweet people do which addresses the culture needed to drive the changes needed in IT and pretty much any field in business. he delves under the buzzwords to examine what it really takes to execute this, from starting to small, allowing mistakes and not imposing a grand plan all the time.
Reply  |  Post Message  |  Messages List  |  Start a Board

Coverlet's observation about hackathons -- that senior management may "see the success and excitement and suggest a soulless alternative" -- reminds me of some of the innovation contests and rallies companies hold. Once you cap the fun and energy by layering on too much structure, you defeat the whole purpose.