41 comments
Comment Now
WWI marked the first time technology was widely used in war. Look back 100 years at early drones, wearables, and other technologies that had lasting influence. 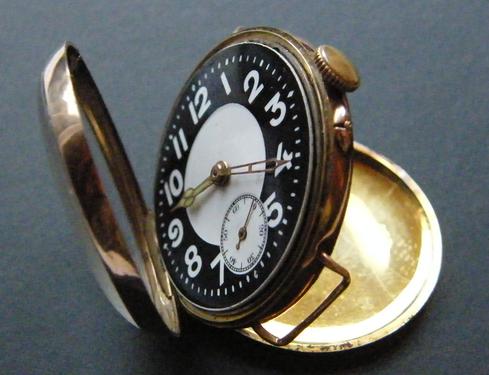 Wearable tech
Right now the tech world has focused its gaze on wearable technology like Google Glass and the long-rumored "iWatch" from Apple. While the first watches to be worn on the wrist were designed in the 1880s, they were considered inappropriate for men (and most women) until the military duties of World War I required two critical things: Coordinated effort and the use of two hands. While the earliest "trench watches" still had the hinged covers inherited from pocket watches, the straps that allowed them to be securely worn on the wrist meant that checking the time became the result of a quick glance rather than an elaborate ritual. Fast forward 100 years and the same action can mean checking in on personal health data, schedule, communications, and, well, time.

@Technocrati: Well, at least if it's on your keychain, you're not likely to lose it.

Unless, of course, you lose your keys.  But then, you've got other problems too, in that case.

I also have some fun ones in interesting shapes, such as rubber poker chips.

My least favorite ones are the ones that are embedded in this plastic business card-like thing.  I mean, hey, handy for your wallet, I guess, but I see people just rip the drive itself right off of those things.
Reply  |  Post Message  |  Messages List  |  Start a Board

@Joe   Rubber braclets ?  That are usb drives ?   Nice. I  am wondering if I would rather that than the drive on my keychain ?
Reply  |  Post Message  |  Messages List  |  Start a Board

Thank you Curtis for a really interesting looking at how the military has influenced tech.  We tend to think things have been around forever - like electricity for instance.

Intraspecies fighting as clans/tribes/factions/etc. war amongst each other is, alas, a fact of evolution.  We're little different than ants or meerkats or several other animals in that respect.  So I doubt 100 years will do much to change that.

And think of all the moons and stars and planets we'll have to fight over with space travel!
Reply  |  Post Message  |  Messages List  |  Start a Board

@Laurianne: I learned about the super glue thing from Breaking Bad.  There's an episode in the first season where a character uses it to heal a wound (although he's using the household stuff -- which, again, may not be the best idea).
Reply  |  Post Message  |  Messages List  |  Start a Board

Curt. Great slideshow. I've seen some general media coverage of the 100th anniversary of The Great War, but it's pretty limited (on comparisonn to the D-Day coverage), maybe because all the vets and most of their immediate families are gone now. What is impossible to grasp today is the carnage, where the deaths of 10,000 men in a day simply met that the pompous military leaders would vow to attack again the next day. It was all for the sake of an extra few hundred yards of mud and the egos of nations that wanted to play with new military toys, such as dreadnaughts, airplanes, tanks, machine guns and even new generations of rifles.

Add to that the misery brought home in the form of influenza (entire families dying in a house that nobody would enter and being unable to do anything even if they did enter), and the fact that WWI really only laid the groundwork for WWII. It's true that the US Civil War may have introduced more technology, but as you note WWI made more general use of those technologies. Then WWII was fought based largely on the next generation of technology and people.

This slideshow was a wonderful idea, and I hope it sheds a bit of light on just how horrible war is, even if it awakens just a few people.
Reply  |  Post Message  |  Messages List  |  Start a Board

I don't think human will finallly become machine zombines but we need to pay attention to the trend. Nowadays people rely more and more on technology. Internet and mobile techniques made our life easier and more efficiently. But people become more and more inclined to be sticky - many people look at smart phone quite frequently. The trend is not good - we  should facilitate the technologyb but cannot purely rely on them.
Reply  |  Post Message  |  Messages List  |  Start a Board

@zerox203: "Wrist stuff" is cool (just look at the fans of FitBit).  One of my favorite pieces of tech conference swag are these orange rubber bracelets, put out by Avere Systems, that are really USB drives.
Reply  |  Post Message  |  Messages List  |  Start a Board

@Jim Wagner: Right you are!  Of course, this article, you'll notice, came on the 100th anniversary of the assassination of the Archduke Ferdinand, which started WWI -- so the point is more about recognizing that anniversary.  Nonetheless, your points are very well taken!  Basic technologies that we take for granted today -- or even consider quaint and far outdated -- were extremely advantageous in early warfare.


The much-debated "heat ray/death ray" of Archimedes immediately comes to mind.  Whether or not it's true, the guy did some pretty neat stuff when it came to warfare.

(@Curt/Dave: Maybe earlier warfare technologies would be a good topic for a followup?  Or a Geekend piece?)

Anyway, all this talk of triremes and chariots and technological development desperately makes me want to play Sid Meier's Civilization now.
Reply  |  Post Message  |  Messages List  |  Start a Board